Comics and Kids: A Review of Freiheit! 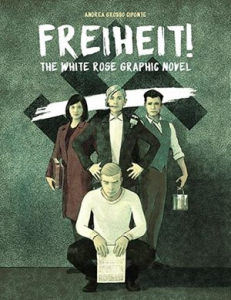 Reviewed by Jeffrey and Ezra Wald.

Comics are the bane of my parental existence. That is probably too strong of a sentiment, and yet at times I feel the apparent truth of the statement.

I remember when my children were younger, not yet of reading age. I reveled in the notion that they would learn to read from Mark Twain’s river tales, or through Tolkien’s Middle Earth, or at the very least by Laura Ingalls Wilder’s prairie stories. My children would skip the “Jim likes cats. Cats like Jim” stories altogether and move right on to the good stuff. The classics.

Alas and alack! Our eldest struggled to read from the get-go. While he loved being read to, learning to read was a real chore. It soon became apparent that he would not be reading The Divine Comedy anytime soon.

As a means of jump-starting his reading independence, I pulled out my complete set of Calvin and Hobbes comics. If this can’t get him reading, I thought, nothing will. And for once—if perhaps the only time in recorded history—my parenting strategy worked. He was soon hooked. The insightful, philosophic, and downright laugh-out-loud comics were just what my son needed to jump start his reading.

But a year or so in, that was all he wanted to read. You could say goodbye to Nesbit, Stevenson, and the like. He wasn’t having it.

I did what any sensible parent would do. I burned the comics. Just kidding. I’m no book burner. But I did place them in a box in the basement and then proclaimed with a certain Catholic sensibility: We are fasting from comics. The mind cannot live on comics alone! I thought my plan was fool proof. I accompanied my children to the public library, and thus could ensure that no comics made it into the book bag. And I had put all the offending material we owned in the basement.

Then my children began attending a charter school with its own library. And as far as I could tell, the only books at this library were comics, or “graphic novels,” or books claiming to be novels that had about two words per page, books like Diary of a Wimpy Kid, The 13 Story Treehouse, and Dog Man. And I’m thinking: Dog Man? Really!? This is the BEST that contemporary children’s literature has to offer?

So I redoubled my efforts. But what seemed at first like a crack in the dike, had turned into a flood. These comics were coming from everywhere. The school. The library. Relative’s houses. Friend’s houses. Those Little Free Libraries around the neighborhood. They seemed to be dropping out of the sky.

I tried a new approach. No longer would I force feed Dante and Shakespeare—I’d settle for anything composed of sentences. Books composed of pages containing not merely pictures, but also nouns and verbs constructed in a semblance of order.

These philosophical musings are easy to have alone on a sofa, but difficult to remember when observing your son spend yet another two hours absorbed by Dog Man’s adventures. And so the parent launches into yet another lecture: You are responsible for the formation of your own mind, young man! You and you alone! Candy is good in moderation, but the human gut will rot away if it contains only sugar. So too your mind! So too!

My son rolls his eyes and asks a probing question, one every bit as philosophic as my own. Papa, didn’t you like comics when you were a kid?

I’m taken aback. And forced to remember. Remember reality as it actually was, not what I wish it had been or pretend it was. Sure, I read a bit of Stevenson, and a whole lot of biographies of baseball players, and Hardy Boys books. But my guilty pleasure, the books I most desired and diligently sought every time I went to my grandma’s house was…shame of shame of shames…Archie Comics!

Oh, agony of agonies. Humiliations of humiliations. This highbrow parent publicly admits his mea culpa, his guilty and infantile yet titillating pleasure of absorbing Archie’s antics. Archie, that dunce, who had not one but two hotties pining for his attention! Please, please don’t tell my children.

In my experience, empathy is hard-won. And easily lost. Having developed a touch of empathy, I wanted to capitalize on it. I began thinking: how might I work with, rather than against, my children’s reading choices?

I know, I thought, I will find some comics or graphic novels about noble characters. Saints and heroes, not wimps and doofuses. And that’s when I came across Freiheit! The White Rose Graphic Novel, by Andrea Grosso Ciponte, from Plough Publishing. It was just what the doctor ordered, a beautifully rendered account of the White Rose university students (including Hans and Sophie Scholl and Cristoph Probst) who printed and distributed leaflets to expose Nazi atrocities and to encourage resistance. These heroic students acted with enormous courage to prick the conscience of the German people. It is both an inspiring and well-crafted book, and a good reminder that not everything produced in the 21st century is bad (indeed, quite a lot is good, even graphic novels!)

Recently, I interviewed my nine-year-old son, Ezra, to learn what he liked about the book, and graphic novels in general. I hope you are as edified by his responses as I was. And I hope you will go out and buy this wonderful book (even if it has lots of pictures to go with the words).

Jeff: Ezra, you’re a big fan of WWII. What interests you about it?

Ezra: It’s hard to say but I think what drew me to it was how people risked their lives for their beloved country, some were 17 and under aged but they lied to go and fight for their country.

Jeff: Do you think other kids should learn about WWII?

Ezra: Yes, I do think other kids should know and learn about WWll. It is fascinating if you love adventure, action, and daring people.

Jeff: What do you like about comics and graphic novels?

Ezra: I like them because of their pictures, especially if they are about WWII, because it shows what happened.

Jeff: Tell me about Freiheit!

Ezra: It is about a few German citizens who wanted to pass the word around about what dark times they were in, and what the Nazis were doing. They wanted to give everyone hope in the dark hour. And got murdered for it.

Ezra: Their friendship for each other.

Ezra: I think it goes well with the story, and explains part of it. For example, the art showed how people were feeling. The pictures were darker, which resembled what was happening around them, and what state the people were in.

Jeff: Would you recommend it to others?

Ezra: Yes! I would most definitely recommend it. It explains what people did to keep that flicker of hope still alive.

Jeff: Does this story have anything to teach Christians?

Ezra: A little bit about martyrdom; they got murdered for their beliefs. I think it teaches us about stretching our boundaries for Christ.

Jeffrey Wald writes from the Twin Cities. His writing has appeared in publications such as Dappled Things, The University Bookman, Genealogies of Modernity, and Front Porch Republic.