Conservatism: A View from Sweden 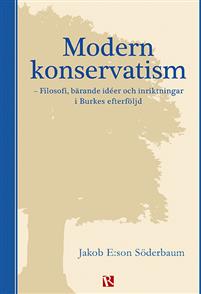 In recent years there has been a significant development in the conservative movement in Sweden. The last few years have seen a series of articles in one of the major newspapers (Svenska Dagbladet) discussing the nature of conservatism, and a conference was held in 2019 by the culture magazine Axess, which included many well-known names in Sweden. To this contemporary debate, Jakob Söderbaum, who holds degrees in both law and economics and has been involved in the conservative movement for decades—having run several blogs, contributed to books and various large newspapers in Sweden—now adds another contribution. This winter he published his latest book in a line of publications relating to conservative thought.

Modern konservatism is divided in a way that is easy to follow, with visual aids in the form of charts to help the reader navigate some of the more complex ideas and distinctions. In this sense, it could also serve as a good introduction to conservatism and political philosophy for high-school students or undergraduates. As it has only come out in Swedish so far, the hope of the author is to influence the internal conservative debate in Sweden. He is concerned with the rise of pseudo-conservatives, such as those he calls “radical conservatives,” and he makes it clear that although they use the word “conservative” they are not inheritors or followers of the Burkean tradition. Moreover, he makes a case for nationalism as non-conservative, with its overemphasis on the nation, at the expense of other communities which are of equal—if not greater—importance, such as the family and the Church. To this end, the book is surely an aid for many who have heard alarming things about conservatism, as they can here trace the separate history of conservatism and these more radical (in the true sense of the term) ideologies.

One of the more original views is Söderbaum’s connection between Burke and Hegel via Michael Oakeshott and Scruton. His thesis is that while Edmund Burke is rightly considered the founding father of conservatism, it is through the philosophy of Hegel that conservatism obtains a more robust foundation. The ideas of Burke and Hegel are thus complimentary, and it was both Oakeshott and Scruton who spelled out this synthesis in their own work. Söderbaum focuses on Hegel’s Phenomenology of Spirit and Elements of the Philosophy of Right, giving a short and accessible overview of both. He claims Hegel lends “philosophical support to Burke’s view of humanity, society, and politics.” In support of this coupling of Hegel with Burke he cites several scholars, while noting that Russell Kirk disagreed with this addition of Hegel to the conservative canon, due to his emphasis on the role of the state in taking social responsibility. In support of Söderbaum’s claim, one might add Hegel’s own polemic against the liberal Jakob Friedrich Fries. At the heart of the inclusion of Hegel is his idea that personal identity or self-consciousness is only possible within a community. It is when I am confronted by another who addresses me as someone other than themselves that I become aware of my own being. The self, in other words, is consequent to the community, not the other way around. Moreover, it is within the society that this dialectical movement takes place, where customs, traditions, and mores arise.

Two other important distinctions made by Söderbaum are those of “liberal vs. social” conservatism, and that conservatism is value-oriented rather than idea-based. The first of these distinctions he traces back to how one views Hegel. A social conservative, in which category he counts politicians such as Disraeli, Bismarck, and Metternich, is more focused on society and has a more critical attitude towards laissez-faire economics, while accepting many insights by Hegel. The liberal conservative, on the other hand, is more focused on the person and free-market economics, as Thatcher and Reagan were. Both these types of conservatism, however, are two sides of the same coin. Conservatives in the tradition of Burke from which both strands ultimately stem, usually lean more towards one or the other side, but are nevertheless still identifiably conservative. Kirk is identified as a liberal conservative, but it is important to note that “liberal” in this context has nothing to do with the American use of the term. In America, “liberal” has usually come to mean left-of-centre, while liberal in Europe still roughly means either libertarian (e.g. Ayn Rand), classical liberal (Adam Smith), or social liberal (Rawls). The distinction, in other words, is no longer so much about the Anglosphere contra Continental conservatism, but rather based on a reading of conservative intellectual history, with Hegel as a philosophical dividing line. An example of a more recent social conservative would be Peter Viereck, with whom Kirk had a lot of disagreements, and this exchange has been mentioned in the foreword to Viereck’s Conservatism Revisited (original 1949, new edition 2005), written by the Swedish scholar Claes G. Ryn, who teaches at the Catholic University of America.

The distinction between value-oriented thought and idea-based movements is that conservatism is united by a set of shared values, primarily immaterial or “intangible,” such as the family, “oikophilia” (love of home), ethical integrity, the little platoons, and a cautious approach to change. In the third part of the book the author systematically presents these conservative values. This is contrasted to utopian visions drawn up by radical political ideologies that center around material—primarily economic—values. Idea-based traditions, he maintains, such as liberalism and socialism, are based on abstract ideals rather than contextual and historically rooted values and they put economics at the center of politics. But why should this be the case, he asks, when some of the things we value the most are beyond the sole possession of the economic sphere? Art, for example, is from a conservative point of view not primarily a commodity to be bought and sold, but a kind of gift bequeathed by an artist to his family, nation, or humanity as a whole. To this end, the government can—perhaps ought to—help artists in the interest of furthering the pursuit of beauty, rather than allowing them to drown in the market. This possible incentivization of art from the government, however, must not turn into the state governing what is produced, and the artists should keep any income they make without being crushed by taxes. Conservatism hence steers a middle ground between an over-emphasis on either Capital or State.

While the book focuses on the Anglosphere and the European Continent, there could have been more mention of the “Latin” world. Some names that come to mind that might have deserved mention are Nicolás Gómez Dávila from Colombia and Augusto Del Noce from Italy. Nevertheless it is a valuable contribution to understanding one of the main traditions within political philosophy, and a forthcoming English translation will no doubt be greeted with interest by neophyte and veteran alike.

Br. Augustine Wärnberg is a member of The London Oratory, and has a MA in intellectual history from Uppsala University, where he has worked on the thought of Edmund Burke, while also having studied the philosophy of Roger Scruton for many years. He also holds a degree in philosophy and is currently reading theology at St Mary’s University, Twickenham, and working on a Ph.D. at Leiden University.