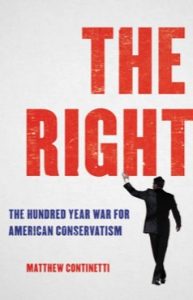 The election of Donald Trump in 2016 marked a watershed moment for American politics and in particular for the conservative movement, or Movement Conservatism. Initially scorned by the conservative intellectual establishment, the think tanks, publications, and writers who had been associated with the American Right since the presidency of Ronald Reagan cracked. Some embraced Trump. Others were recalcitrant in opposing him. Matthew Continetti’s new book, The Right, helps shed light on the fractions and fissures in American conservatism that boiled over during the Trump Administration and offers a path forward for American conservatism by looking at the success it had during the Cold War.

What is American conservatism? Since 2016, many new books and thinkers have devoted themselves to this topic. While some intellectual histories have given consideration to conservatism before, the flurry of works in the wake of Donald Trump provide much to consider.

In short, there is the Movement Conservatism thesis of George Nash, himself an insider of Cold War conservatism, where the right is the amalgamation of moral traditionalism grounded in a cultural Christianity, relative free-market and free-trade economism or libertarianism, and a strong foreign policy of democratic internationalism rooted in anti-Communism, political liberalism, and human rights. These three spirits are often contrary to each other but found a necessary and fruitful alliance in the Cold War. Then there are the leftwing criticisms of conservatism, which superficially amount to conservatism as a racist white backlash to Civil Rights and emphasize the more populist element of rightwing politics in America. These criticisms reduce conservatism to a crass and unenlightened phobia and prejudice.

Continetti’s work aims, in his words, to “describe how the varieties of American conservatism differed from another, how big those differences were, why the disagreements began, and what their effect was on American politics. My framework is the endless competition and occasional collaboration between populism and elitism.” While the book opens with our young author, in his early twenties, coming to the Weekly Standard in the early days of the Iraq War in 2003, the book contrasts the origins of the conservative crackup by examining the similarities and differences of conservative currents from 1920 to 2020 in a concise yet still breathtaking hundred-year history.

Continetti highlights the trajectory of how conservatism went from defending the ideals and institutions of Americanism to a paranoia of internal and institutional subversion culminating in “the viral president.” In some respects, it is the result of the imbalance between the varieties of conservatisms that make up the American Right. There has always been, especially in the aftermath of Progressivism, New Dealism, and the Red Scare, an alliance between national populists and institutional shepherds and elites who often held genuine conservative sympathies and beliefs.

The great tension of the American Right stems from this struggle nearly 100 years ago. There is a movement of pro-market, pro-business, anti–New Deal Republicanism alongside the isolationist, protectionist, working-middle-class populist Republicanism and disaffected leftism clothed in religiosity, American Protestant identity, and occasional anti-Semitism. World War II and the Cold War marked the triumph of the pro-market and anti-Communist wing of the party, which returned to the Presidency under Dwight D. Eisenhower for the first time since 1928, with support from, but institutional exclusion of, the populist elements of Middle America.

But the populist “Appalachians to Rockies patriotism” remained adamant of internal subversion even under the Eisenhower Administration. Military heroes like Douglas MacArthur and senatorial firebrands and loudmouths like Joseph McCarthy bemoaned communist infiltration inside American institutions betraying the American promise, and a new generation of conservative intellectuals and writers were dissatisfied with the moderate conservatism of Eisenhower.

Within this framework there is also the geographic divisions between Beltway Establishmentarianism (to which Continetti openly belongs) and the Flyover populism of Claremont (despite its West Coast location), Hillsdale, and Robert Taft to Joseph McCarthy to Pat Buchanan Middle American Radicalism. Such Midwestern populists, long part of the conservative movement and Republican Party, were often kept in check by the heirs of Me-Too Republicans who made peace with FDR’s New Deal and accepted the demands of foreign policy internationalism in confronting global, but especially Soviet, communism. While throughout these pages Continetti generally is sympathetic and erudite, there are some cheap attacks on these Middle American patriots. They have legitimate grievances but should not be brought too close to the levers of power.

Scattered across the portrait of the American conservative movement are names, however brief or large, that many will find familiar: Irving Babbitt, Albert Jay Nock, Willmoore Kendall, Russell Kirk, Leo Strauss, William F. Buckley Jr., Brent Bozell, Harry Jaffa, and Mel Bradford, among others. Buckley appears as the principal hero among this motley crew of writers, intellectuals, and flawed but voracious politicians, in his energy and persistence in articulating a conservative vision and bringing it into the mainstream public through National Review and his lecturing and organizing of societies and student groups.

If there is a single hero in this long struggle to define conservatism, it is Ronald Reagan, who had come “from stage left” to become the new standard-bearer for conservatism and brought it into mainstream acceptance and credibility, “Reagan’s presidency changed not only the world but also the American Right. The locus of conservative life became the Beltway.” While one might say conservatism today has Reagan fatigue, there is no denying Reagan’s importance to American conservatism.

What united the disparate wings of the Republican Party and the conservative movement in America was a broad commitment to anticommunism, if for different reasons. The godless, totalitarian, and collectivistic demon that threatened the Christian religion, relative free-market and entrepreneurial economics, and a political order structured on liberty under the law and republican democracy united traditionalists, libertarians, and ex-communist and anticommunist liberals. Part of the struggle for twentieth century American conservatism was finding the balancing act between these various movements and their concerns and constituencies. Reagan’s magic lay in how he was able to channel these groups, including American populists, into an effective coalition.

Reagan, as we know, had his beginnings as the affectionate and charismatic Ronnie, the B-list actor and soft New Deal liberal preserving the screen actors’ unions and their freedoms from communist centralism and homogenization. In time, Reagan moved right as the Democrats moved left. The softening of the anticommunist position among leading Democrats and liberal intellectuals prompted Reagan’s metamorphosis from FDR-admiring Democrat to pioneering trailblazer for American conservatism with a hopeful and inclusive, not regressive and exclusive, message for the United States and the world. This metamorphosis is, in and of itself, a story of hope.

An implicit theme that Continetti advocates, then, is that American conservatism needs to be concerned with domestic reform while not abandoning its international commitments, and to do so without a pessimistic rhetoric or disposition. In a word, a new Ronald Reagan needs to meet the challenge that the Great Communicator managed to achieve in 1980 despite the turmoil of Nixon’s resignation, the blandness of Gerald Ford, and the malaise under Jimmy Carter. In this respect, the social environment that Reagan found himself in isn’t all that dissimilar from the environment we find ourselves in now.

Continetti’s history is filled with the ups and downs of the conservative movement, including both the conspiratorial elements and farsightedness of the movement. History does not repeat, but it certainly rhymes. The various factions within American conservatism may now feel fatigued. Yet often at their lowest point in the past was when they also experienced sudden and dramatic revival.

While sometimes tragic, there is also much to hope in this struggle. Conservatism in America finds itself in a place as it has in times past, with “a new generation of conservative hawks … about to rise.” In the 2020s many of us sense the same: the old guard of conservatism is passing away, but who the rising conservatives are remains unknown. Whoever they are, Continetti offers a concluding exhortation to them that they should not abandon the rich complexities of the American founding and its unique political system that has made so many lives better, contrary to the claims of contemporary post-liberal, integralist, and New Right critics. While, as always, conservatives will draw upon European sources from yesterday and today, in doing so the movement must ultimately remain American in character.

Paul Krause is editor-in-chief of VoegelinView and the author of The Odyssey of Love: A Christian Guide to the Great Books (Wipf and Stock, 2021).