Conservatism? What a Concept 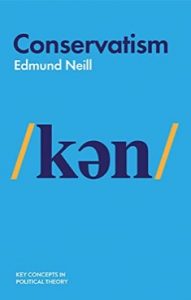 Edmund Neill, in a chapter called “Defining Conservatism,” tells us that this “book seeks to define the concept of conservatism.” To do this he explores it in the context of Britain, France, and the United States. Reading about conservative thought, action, and policies across these great nations was a pleasure and provided the reader with the opportunity to do a bit of comparative thinking.

The author is a Lecturer in Modern History at the New College of Humanities at Northeastern University in the United Kingdom. Therefore, it is not unexpected that the theoretical framework for the book is historical in nature, which I believe is a strength of the book. Before diving into the historical aspects of the book, though, there is a chapter that deals with the ideational traits of conservatism. This chapter is concise, intellectually pleasing, and a joy to read. Before providing the reader with his own view of conservatism, he outlines some of the key conceptual difficulties in defining conservatism.

After this exercise, he runs through some of the differing types of definitions. Some examples are the dispositional types (think Samuel Huntington) the traditionalist types (think Michael Oakeshott) and, what I have coined, the sociologist types (think Karl Manheim). Neill then concentrates on what he believes are the two core aspects of conservatism. The first of these is the “extra-human” forces, or in other words, factors outside of human agency. This perhaps could be rephrased in a more Burkean or Kirkean style as the providential nature of human society, or perhaps in a more Scrutonian way as the transcendental order or authority. The second core aspect, according to Neill, is the concept of natural evolution of institutions, for example based on trial and error. This does seem to leave Neill’s position on conservatism a bit thin, for there is more to this body of thought. Nevertheless, this definitional exercise is most welcome as there is an ongoing debate about what conservatism is, what it ought to be, or even can be. There is also today discussion around the role of the state, the type of social thought undergirding conservatism, and therefore social policy requirements and the role of public religion, as well as other key issues.

Yet, academic literature on conservatism is at a premium especially in comparison to more researched topics such as feminism or liberalism. This, however, is not a new occurrence. C. D. Broad wrote back in 1913 of the scholarly neglect of conservatism.[1] More recently, the British academic Mark Garnett wrote that “whatever the reasons for relative scholarly neglect, the result has been a host of questions about conservatism which are more often addressed by critics than by those who wish to provide plausible answers.”[2] Thus, Neill’s book is a most welcome addition to the academic literature on conservatism, as it studies the subject from a scholarly disposition. To use what I have termed the “Garnett Dichotomy of Conservative Literature,” it aims to provide “plausible answers” and takes conservative thought seriously, unlike many left-wing academics who merely wish to dismiss it all together or to provide a caricature of it.

The timespan of the book covers conservative thought from the French Revolution to the present day. A core strength of the book is the wide range of conservatives that he has included, from conservative politicians such as Donald Trump, Margaret Thatcher, and Ronald Reagan, to poets like T. S. Eliot and William Wordsworth, thinkers like F. A. Hayek, William F. Buckley, and Henry Adams, and activists such as the great Phyllis Schlafly. This approach provides the reader with a more holistic and complete picture of conservatism, which is to be commended. Furthermore, Nathaniel Niles, the authors of the Federalist Papers, and Edmund Burke are prominent in the early parts of the book. W. G. Sumner, Andrew Carnegie, Leo Strauss, and the late great Russell Kirk are also present. Neill notes some of Kirk’s achievements, such as the founding of Modern Age. He also describes his argument that there is such a thing as an American conservative tradition (which is to my mind Kirk’s greatest achievement). Kirk’s majestic The Conservative Mind (a book that I turn to again and again) should have taken up more time and space in the book to be more commensurate with Kirk’s influence during this period and beyond. Moreover, if I may get a bit Smithian, through the positive externality of the invisible hand the book demonstrates that conservatism is not a narrow economic doctrine or even that economics is at its core—or as Scruton might put it, conservatism at its essence is cultural and historical.

The present-day chapter of the book is unfortunately lacking the most up-to-date debates and intellectual developments within conservatism, especially in the United States but also in the United Kingdom. This is because there is too much stress on the 1980s and 90s in this section. For example, the intellectual movement of post-liberal conservatism within these two nations and their key thinkers such as Patrick Deneen or Adrian Vermeule in the USA or Phillip Blond in the UK are omitted. Moreover, the development of National Conservatism is also overlooked as well as one of its key thinkers, Yoram Hazony.

Confusingly, these two movements and others have been coined, in the USA, as the “New Right” and are broadly against Reaganism and Thatcherism, both of which were once coined themselves as “New Right” in academic literature. Therefore, today’s “New Right” stands in opposition to the old “New Right,” which is quite amusing. Despite the nomenclature issue these are important and developing strands in conservative thought, and they play a critical role in the current debate about conservatism. Another key omission in this chapter is Wendell Berry and his “green” conservatism.

Nevertheless, a reader of the book who is well versed in the current trends, tensions, and dilemmas will observe that the debate about these aforementioned issues have historical forerunners such as Romantic Tories in the early 1800s, who were skeptical about the role of free markets, and Liberal Tories who embraced it wholeheartedly. Perhaps, to half-quote Lord Brougham, “what is valuable is not new” and in the case of the ideas animating discussions about conservatism at the moment, there are historical foundations for them and they are therefore not all that new. It might be wiser to think that a return to the permanent things is the way forward together.