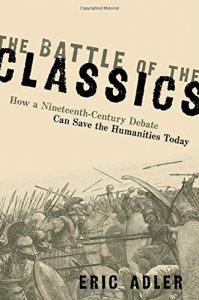 It is salutary to be reminded that the history of Western education has always been the story of an argument—more often heated than not. Eric Adler knows this well. He wrote a previous book about an academic culture war in which he notes that North America has been the scene of intense higher education discourse since before the USA even existed. This work was aimed more precisely at his fellow classicists, but it contains at least three substantial themes of the current volume, The Battle of the Classics. Adler posits that we become better interlocutors in the present by grounding ourselves in the past. Second, Adler’s tone is irenic. It asked a beleaguered subset of scholars (classicists) to “embrace a ‘big tent’ philosophy” in defending their discipline against would-be barbarians. It was a worthwhile call to “a greater sense of “public-spiritedness.” Thirdly, Adler’s work manages to appeal to both guild members and those outside the guild. A classics professor, Adler is able to provide academic insider-baseball for those who are interested. However, this does not overwhelm a thesis of potential value to a wide readership comprised of anyone interested in education, from schools to research universities. Adler’s view is that, in accepting an instrumentalist premise fundamental to modern education—that skills are the summum bonum—champions of liberal learning have given the game away. One walks away from this book with a realization we are all capable of better arguments than we think.

The “battle” of the current work is part of a pedagogical war between traditionalists and modernists. These are my terms, not Adler’s, and they are simplistic. Adler himself is careful to avoid such simplifications, in keeping with his winsome tone. There is, however, no doubt that he sees high stakes in the debate about the value of the humanities. The idea of “saving the humanities” mentioned in the subtitle is arguably more realistic if cooler heads do their best to understand the terms and premises of their interlocutors. Adler is also keen to shift our pedagogic and rhetorical energy from a focus on skills to content. Any “humanities apologetics that avoid vouching for specific humanities content are doomed to failure.” The best humanities instruction insists upon the “intellectual, aesthetic, and moral value of studying profound works …” Finally, these works may derive from “a rich variety of human civilizations.”

Each of these claims will be debated, and this is how it should be. But The Battle of the Classics is aimed at a “truly ecumenical wisdom” briefly described in the final chapter. One gets the distinct sense, from the book’s acknowledgements through to its conclusion, that Professor Adler has arguments to make, but that he can make them and still get along quite well in the faculty lounge. This is an analysis of a long culture war rather than culture-warring. While Adler argues from what could be called a relatively “traditionalist” side of the debate with modern educational reforms, he is here critiquing his allies as much as anything else. Defenders of the liberal arts, he says, have ceded ground to their more obviously pragmatic opponents by accepting practical terms of debate. These range from “mental discipline” to “critical thinking” and an informed democracy. None of these goods are capable of sustaining the humanities, says Adler. On the contrary, content is key: the encounter with ancient texts idealized in the Renaissance tradition which blended humility with criticism is certainly a model, but for Adler it is not the only precedent. The material of liberal learning might come from any number of cultures.

For most of us, the eye-catching title of this book invokes the “culture wars” of the 1980s and 90s. It is worth noting that it is common for many of us to confine academic culture wars to a specific chapter in late twentieth-century American history, thanks in large part to Allan Bloom. Decades later, it is obvious that these “wars” still rage, even as we tend to avoid the “culture war” moniker. Like kulturkampf, the “culture war” label has come to be a more precise historical term—and therefore inherently historic, not to say dated. Adler does us a service in reminding us that these wars are perennial. The risk here is that professors, students, and teachers follow the lead of publishing houses in making controversy the story, but Adler offers much more than clickbait.

Though focused on a specific few decades across the turn of the twentieth century, roughly half the book is about the present—and the more distant past. Adler begins in the present: The core of the book is focused on educational debates on either side of the year 1900. Across three chapters, Adler highlights three episodes in the argument about liberal learning ranging from 1883 to about 1930. First, the address of Charles Francis Adams Jr. to Harvard’s Phi Beta Kappa society; second, a debate between Harvard’s Charles Eliot and Princeton’s James McCosh (both presidents of their respective institutions). The last chapter focuses on the controversy surrounding Irving Babbitt’s “New Humanism.” The venues of these debates were unquestionably “elite” by any definition, as were most of the participants. It is important to note, however, that the proceedings were covered with great interest by newspapers and periodicals at the time. Further, Adler deftly humanizes several of the main characters. None were academic classicists; all were flawed.

The Battle of the Classics is the sort of book that is likely to generate both substantial and trivial critiques. The latter sort may result from a failure to distinguish the academic profession of “classics” from the “classics” in a more liberal arts sense, also known as “the humanities.” Such distinctions are increasingly difficult to make. The second chapter here, a fifty-some page survey of the history of studia humanitatis from their Greek origins through modernity, is valuable. The bulk of it concerns the modern period. (Adler cites a forthcoming work Robert E. Proctor, whose earlier work also informs this book.) Furthermore, the minute we acknowledge K–12 classrooms are as important as higher education—if not more so, these scholarly misunderstandings become relatively unimportant.

This book could have been shorter. It might also have been longer. The short version is an article on the issue of skills-versus-content. It is summarized in the Introduction and fleshed out in subsequent chapters. This skills debate will strike some as common, but I made it through more than twenty years of formal education, from public and private schools to graduate programs in the USA and the UK without having a chance to pause and wrestle with the issues presented in Battle of the Classics. This is the value of Adler’s contribution: he asks readers to consider, in a politically “ecumenical” tone, the nature and purpose of liberal arts education. He could have chosen any number of historic episodes; the turn of the twentieth century is of course only one of many potentially fruitful chronological foci. These are secondary. What matters are the underlying issues that he states at the outset and follows through to his conclusion more than two hundred pages later.

The longer version would include more debates. Those highlighted are certainly not the only debates of the time; we could point, for example, to James Russell Lowell’s address at Harvard’s sesquicentennial in 1885. He stood athwart the radical reforms of his colleague (and college president) Charles Eliot—reforms which, as Adler shows, have long been the DNA of the research university. The famous debates between Thomas Huxley and Matthew Arnold are another instance. These late-nineteenth and early-twentieth century episodes serve a larger purpose. One of the primary contributions of this book is to improve this current debate by deepening our historical awareness: little if any of our popular discourse is unprecedented where education is concerned. Adler’s episodes did, however, generate as much reaction among both popular and scholarly publications as fights more familiar to us, such as C. P. Snow’s against F. R. Leavis in the 1960s—the most well-known precedent of our current, beleaguered “STEM vs. Humanities” debate.

Not only is The Battle of the Classics that rara avis published by a university press with the potential to inform and improve popular discourse, it also encourages deeper questions and sparks further—potentially fruitful—debate, some of which has already started online and in print. It begs the reader to think hard about the purpose of education. In an ideal scenario, this book would motivate us to deepen the debate and re-evaluate our premises. In 2021, educational controversies are front-page news; at the same time, they are matters of significant sessions at any number of professional academic conferences. Adler’s invitation to a more substantial conversation (regardless of one’s “side”) is obviously timely.

Is there a hierarchy of goods where schooling is concerned? If so, is a literate electorate in first place, or is it rather a healthy national economy? These are two of the questions Adler addresses. Currently, there seems to be some agreement among “traditionalists” and “reformers” that education is more than either of these. In my experience, this leads to the question of personhood—which is bound to the content and purpose of education: Are the “public-spiritedness” or “moral values” mentioned by Adler actually viable concepts? Is “historical context” the same thing as reading an author on their own terms, or is it an excuse not to read them? Any discussion on these matters will be improved by reading this book.

J. Kinlaw is Assistant Professor of History and Humanities at The King’s College (New York City).