Craftsmanship as Social and Political Endeavor 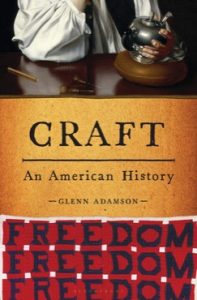 Glenn Adamson’s new book has completely blown my mind. Like so many great works of history, Craft: An American History takes a seemingly niche subject and demonstrates how it is essential to the story of everything. Adamson argues persuasively that old-fashioned handiwork is not so old fashioned. Nor is it something newly revived in the person of presently fashionable artisanal makers. Craftsmen and craftswomen have been a continuous part of American life—economically, culturally, and socially. The significance of skilled manual work, as Adamson defines “craft,” has been a matter of mere survival and a matter of choice, depending on one’s time and place.

For Adamson, craft is ordinary, always hiding in plain sight. Despite its contemporary reputation as niche, he situates artisanship within the practice of everyday life—an act that manifests extraordinary things in commonplace settings. He describes in detail the diverse ends that artisans and their wares have served in communities of all kinds since colonial times. He makes a persuasive case that craft has been a durable source of independence, identity, and livelihood in American life. One that has often survived challenges from rapidly expanding, mechanically reproduced alternatives. The endurance of artisanship is a testament to human agency—to choices made both by producers and consumers.

Adamson’s democratic definition of craft leads in some interesting directions. When the author speaks of the cultural and economic independence of craft, he is not only speaking of Henry David Thoreau’s notions of living by one’s own hands. Nor is he speaking solely of antique smiths earning a living by doing things in the time-tested way. For one thing, he is speaking of African American artisans making use of their skills to safeguard their liberty. Craft competence provided many African Americans, both before and after the Civil War, with the ability to earn a livelihood independent of the formal political and economic restrictions on their freedom.

“Despite an intimidating range of obstacles, there was at least an opportunity to succeed,” Adamson wrote of African American artisans who migrated north in the late nineteenth and early twentieth century, finding work in the building trades of large cities. In this particular instance, Adamson was speaking of a skilled bricklayer named Charlie Bullard, who moved north from Jim Crow Tennessee to St. Paul, Minnesota in 1902 and played no small part in building many of the city’s grandest structures, including the State House. Bullard is just one of many examples of socially marginalized people described in the book who built an identity and a steady income around their manual skill.

A much different though no less striking account of the social significance of craft comes through Adamson’s description and analysis of the post-World War II “Do-It-Yourself” movement. Despite living in ever-more prefabricated homes, millions of Americans found both a source of identity and economic independence in their ability to make repairs and additions to their homes. The sense of pride that many homeowners, particularly men, took and continue to take in being “handy” remains an important source of American identity and economic independence—these are masters of their own domain who don’t need to call a contractor every time something goes haywire in their dwelling. These Do-It-Yourselfers, in fact, served the ends of mass production by creating a rapidly expanding marketplace for portable power tools and home construction equipment.

This fascinating section of Adamson’s book could be teased out in a number of other directions by future scholars. For example, the confidence in the face of uncertainty with which craftiness around the house continues to endow many blue-collar men has undoubtedly served as a source of social power and self-affirmation in the face of the changing economic, cultural, and social dynamics of recent decades. This and many other offshoots of his section on the “Do-It-Yourself” movement could each fill their own volume.

A half century later, Adamson finds a similar ethos to the “Do-It-Yourself” movement animating the success of Martha Stewart. More than anyone in recent memory, the author, host, and magazine publisher succeeded at presenting craft as a broadly consumable, aspirational activity, particularly for women. Stewart found a massive audience among women by presenting tasks once seen by many homemakers as tedious instead as a source of domestic satisfaction. It was no coincidence that Stewart’s emergence as the culture’s most ever-present aesthete took place at the same time that the wage and salary-earning workforce became increasingly populated by women. Stewart offered them not only a window to a lost world of domestic know-how. She also set out an ornate road map back to the traditional trappings of hearth and home that could either be attempted or merely appreciated.

The further I got into Craft: An American History, the degree of skill and know-how required to write such a book became more evident to me. Luckily for readers, its author is Glenn Adamson. If you could wave a magic wand and pick the ideal person to write this book, Adamson would be the one. Adamson is a highly decorated museum curator and author best known for his tenure as director of the Museum of Arts and Design in New York. He combines the curator’s attention to artistic detail with the historian’s preoccupation with change over time. Most importantly, Adamson has the requisite scholarly tools to render this story in full. He is equally conversant in the languages of the cultural anthropologist, the aesthete, and the labor historian, enabling him to write about the history of artisanship in a genuinely authoritative fashion.

Clayton Trutor holds a PhD in U.S. history from Boston College and teaches at Norwich University in Northfield, Vermont. He’d love to hear from you on Twitter: @ClaytonTrutor