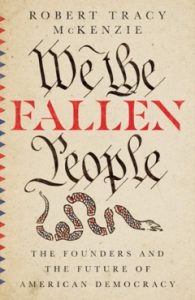 We the Fallen People: The Founders and the Future of American Democracy
by Robert Tracy McKenzie.
IVP Academic, 2021.
Hardcover, 304 pages, $28.

As U.S. troops continued their exit from Afghanistan this summer, a former high-school history student of mine (and a former Marine) expressed his displeasure with the U.S. military’s departure from a country in which he had faithfully served. As one who completed multiple tours in Afghanistan, I myself appreciated his frustration and discouragement. Had we risked our lives and seen friends of ours die in faraway lands to now ignominiously retreat?

But my former student’s take was more than just exasperation and demoralization. He also declared that Americans should be ashamed that we were not able to solve Afghanistan’s problems even after investing twenty years and billions of dollars. I was a bit taken aback by such an assertion, given how money, time, and a do-gooderism were invested in a landlocked country dominated by tribal warlords. Yet upon reflection, perhaps such an opinion is not so surprising, given a certain hubris among many Americans—particularly of a progressivist bent—as well as deep-seated confidence in the goodness and perfectibility of man and society writ large.

Wheaton College professor of history Robert Tracy McKenzie has thought a lot about human nature as it relates to American democracy. In his new book We the Fallen People: The Founders and the Future of American Democracy, he argues that while the Founders who fashioned our Constitution had a profound understanding of human sinfulness, for most of our nation’s history the more dominant narrative has been one of the American people’s inherent virtuosity. That thinking, says McKenzie, has had a demonstrably negative effect on American democracy, much of which he believes is manifested in contemporary populism, and especially evangelicals’ willingness to forgive (or ignore) Donald Trump’s very visible vices.

That the Framers were realistic and unromantic about human nature and its limitations—and that this informed their thinking during the formation of the Constitution—is well evidenced. In Federalist 51, perhaps the most important treatise on the separation of powers authored by the “Father of the Constitution,” James Madison, we read, “If men were angels, no government would be necessary.” In Federalist 47 Madison similarly observes: “The accumulation of all powers, legislative, executive, and judiciary, in the same hands, whether of one, a few, or many, and whether hereditary, self-appointed, or elective, may justly be pronounced the very definition of tyranny.” Again in Federalist 10 he argues that factionalism is intrinsic to human nature.

It was in large part because of their acknowledgment of original sin that the Framers devoted so much attention to ensuring a separation of powers, both within the federal government and between the federal and state governments. John Adams, in his essay “Thoughts on Government” (1776), acknowledges his fears about the potential for the consolidation of power and thus the need to distribute it among the three branches of government. George Washington, in his 1796 Farewell Address, expressed concern that if the separation of powers were to be undermined, it would inevitably lead to despotism. As McKenzie notes: “they [the Framers] went to elaborate lengths to design the Constitution with this understanding in mind.”

Because the Framers perceived sin as a permanent feature of fallen human experience, they believed virtue and religion to be essential for restraining man’s wicked impulses and forming him to be a good citizen. In his address, Washington argued:

Of all the dispositions and habits which lead to political prosperity, religion and morality are indispensable supports. In vain would that man claim the tribute of patriotism, who should labor to subvert these great pillars of human happiness, these firmest props of the duties of men and citizens.… Where is the security for property, for reputation, for life, if the sense of religious obligation desert the oaths which are the instruments of investigation in courts of justice? And let us with caution indulge the supposition that morality can be maintained without religion. Whatever may be conceded to the influence of refined education on minds of peculiar structure, reason and experience both forbid us to expect that national morality can prevail in exclusion of religious principle.

In a 1798 speech to the Massachusetts militia, Adams offered a similar thesis: “Our Constitution was made only for a moral and religious people. It is wholly inadequate to the government of any other.” McKenzie views these observations and exhortations by our Founding generation not as emblematic of some “golden age of civic virtue,” but rather a reaction to a “crisis of virtue,” following the disastrous Articles of Confederation.

In McKenzie’s telling, it required only fifty years for this religio-political paradigm to begin to unravel, initiated with the 1828 election of populist Andrew Jackson, who preached a “gospel of democracy” that asserted that “men and women individually are basically good, and collectively they are reliably wise, with the result that the will of the majority is infused with an unassailable moral authority.” Jackson certainly spoke this way. “I can assure you I have too much confidence in the virtue of the people” to not cast their ballots for “designing demagogues,” he wrote to the governor of Kentucky in 1825, the first time Jackson ran for president. That election, he declared elsewhere, was a “struggle between the virtue of the people and executive patronage.”

McKenzie cites two examples from Jackson’s presidency (1829–1837) that show the problems with populist politics that highly esteem Americans’ virtue. The first is the Jackson administration’s Indian policy, which undermined earlier U.S. government strategy that had often sought to civilize and assimilate Native American tribes. Jackson’s appalling treatment of Indians—and the Cherokee in Georgia especially—is well known. Yet far from being a “betrayal of democracy,” McKenzie, relying on the scholarship of historian Robert Remini, observes that Indian removal enjoyed broad popular support across parties and the electorate.

Jackson’s war with the Bank of the United States was also a populist policy driven by anti-elitism. “It is to be regretted that the rich and powerful too often bend the acts of government to their selfish purposes,” said Jackson. Writes McKenzie: “But if Jackson’s diagnosis in this respect was sound—the bank did exercise inordinate influence with limited accountability—his prescribed solution was classically populist. He would save the people from the Monster that threatened them.” Through a number of executive decisions—including removing all federal funds from the Second Bank of the U.S. and redistributing them to various state banks—Jackson elicited the ire of the Senate, who censured him for abusing presidential power and vitiating constitutional checks and balances.

McKenzie sees in Jacksonian populism an inflection point that inaugurated a different American self-understanding, one that promoted the American people as inherently good and virtuous, and that therefore made Americans more susceptible to demagoguery. Indeed, one of the common themes through the book is McKenzie’s frustration with a quotation falsely attributed to French political theorist and Jacksonian contemporary Alexis de Tocqueville: “America is great because she is good, and if America ever ceases to be good, she will cease to be great.”

Tocqueville not only never said this, he would have flatly disagreed with it. The Frenchman, who visited America during Jackson’s first presidential term, posited that “the desire to acquire the goods of this world is the dominant passion of Americans,” and that their quest for material success was “an anxious, burning passion that grows even as it is satisfied.” He further warned of a potential “tyranny of the majority” that would impose the popular will on disenfranchised and marginalized groups. These fears in part stemmed from the fact that Tocqueville had a skepticism towards human nature similar to that of the Founders.

Fast-forward to our own time, and McKenzie is convinced that much of our current sociopolitical distemper (and what he deems to be unhealthy alliances between evangelicals and a Republican Party increasingly beholden to ideologues) can be traced to the effects of Jacksonian populism. He cites various polling over the last thirty years showing that Americans, and even evangelicals, believe that people are basically good. For McKenzie, this proves that it is Jackson’s, rather than the Framers’ understanding of human nature that is dominant in contemporary America. In this, Mackenzie is likely on to something, though his account of American populism is too incomplete to blame populism per se.

McKenzie makes much of American opinions on human nature, but it is not only contemporary evangelicals subscribing to what sociologist Christian Smith calls “moral therapeutic deism” who believe people are basically good. No less than Thomas Aquinas acknowledged that although human nature was “corrupted” by the Fall, it retained the imago dei and thus was capable of both identifying and realizing many natural goods. In this respect, Aquinas shared much in common with the ancient Greeks and Romans—from whom the Founders derived much of their own political philosophy—who believed that many objective goods were achievable for a people who possessed, however inchoately, an inclination towards virtue.

Nevertheless, there is little doubt of the damage to American political society in the last half-century. Americans are more civically disengaged, socially isolated, and narcissistic than the Greatest Generation or those generations that preceded it, as Robert Putnam, Charles Murray, and Christopher Lasch, among others, have noted. There are many reasons for this, among them declining religiosity, the breakdown of the family, and atomism stemming from various technological advancements like the television and smartphone. And these trends can be blamed on many influences not only recent (the sexual revolution, postmodern philosophy, globalization) but ancient (the Enlightenment and the Reformation, as historian Brad Gregory argues, or certain strands of Medieval thought, as Scott Hahn argues).

If many of the problems twenty-first century America now faces originate in the premodern era, perhaps Jackson is symptomatic of a more fundamental incoherency in post-Reformation political and social thought. Indeed, I would argue that Martin Luther and the other Reformers (perhaps unintentionally) encouraged egoism by asserting that religious authority lies not in some external, divinely commissioned hierarchy, but in the mind and heart of the individual Christian. It would not take long for Europeans to dispense not only with ecclesial authorities, but even Holy Scripture itself, arrogantly believing themselves capable of building a virtuous, utopian society that made no recourse to transcendent truth or religious faith.

That reminds me of my idealistic former student and veteran of Afghanistan. Schooled in a secular, progressivist ideology that perceives few limits to humanity or society, he, like many millennials, believe there is no problem too complicated for do-gooder experts with endless budgets. Thus our exit from Afghanistan, like our inability to eliminate poverty, reflects a lack of willpower to apply the right political and economic tools and technocratic tradecraft, rather than proof of our own ineradicable limitations and weaknesses. To paraphrase H. L. Mencken, the Afghans simply need more Western-sponsored democracy, the gooder and harder the better. Twenty years of this—guided, I might add, not by populists, but by well-educated elites—is not enough to cure Americans of such thinking. Such a hubristic conception of ourselves suggests the way back from the progressivist project will be long indeed.