Desire Is the Human Condition 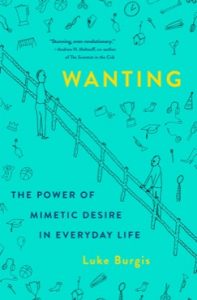 “All are lunatics,” Ambrose Bierce once said, “but he who can analyze his delusion is called a philosopher.” And the biggest delusion of all, or at least the most prevalent, is what the late scholar Rene Girard called the Romantic Lie. This delusion is the comforting and near-omnipresent belief that we desire what we desire as a result of autonomous and independent thought.

Ask me why I purchased the computer on which I type these words and—under the spell of the Romantic Lie—I may well begin to talk about its objective qualities and specifications. Or I may bluntly state that I simply prefer this type of computer. Or I may recount how I saw this desktop on display and just knew that I wanted it. The heart wants what the heart wants.

Now, in this version of events the relationship between myself and the object I desire is linear. And therein lies the delusion. Because as Girard argued all desire is in fact mimetic. It is founded on the imitation of a model. Just as the child is not interested in any of the toys until her classmate starts to play with one, so are we “rational” adults not desirous of a certain course of study or career or neighborhood to live in until our peers gravitate toward them. It is only then that we “spontaneously” want the same things. Even Eve wasn’t interested in the apple until the serpent modelled it and in doing so transformed it into the most desirable of all of the fruits of Eden. And as it was in Genesis so it is today. The heart wants what other hearts appear to want.

The implications of this are existentially dizzying. If my desires are not self-generated by reason and are instead dictated by mimesis, doesn’t that make me inherently open to manipulation, whether it be by advertisers, algorithms, or other stripes of social engineering? If my wants are not my own, is my life in some sense a lie? And worse, if everyone else is thus afflicted, doesn’t this inevitably lead to conflict, rivalry, and violence as we are all driven to scramble and hustle and compete for the same objects of desire?

Yes is Girard’s answer. This is the human condition. And it is to his credit that in Wanting, Luke Burgis neither shies away from this reality nor conversely wallows in such deficiencies as so many present-day nonfiction writers are seemingly prone to. Further, he avoids the temptation to pin the problems of our times onto a scapegoat, the tactic that Girardian theory states is the inevitable means by which a group cures themselves of the battle of all against all once mimetic conflicts have reached a boiling point.

That Burgis has himself sidestepped the mimetic nature of the self-flagellation, doomsaying, and scapegoating of the contemporary nonfiction writer attempting to analyse our current situation lends credence to his assertion that it is both necessary and possible for us all to escape this mess by becoming more anti-mimetic as individuals.

When casting his eye forward to the possibilities of the internet-led future, David Foster Wallace noted: “We’re gonna have to develop some real machinery, inside our guts, to help us deal with this.” Well, the future is now and Wanting is as good an instruction manual for the construction of such guts machinery as I have come across. That it manages to make the often dense anthropology, literary criticism, and cultural research of Girard both understandable and palatable for a lay audience is one thing. That it manages to do so while being witty, heartfelt, humane, and often genuinely insightful is another thing entirely.

The middle segment of a Venn diagram where popular appeal, rigour, actually useful insight, and the avoidance of condescension and dumbing down meet is slim indeed, yet somehow Burgis finds this mark. Even the accompanying illustrations and diagrams by Liana Finck successfully navigate the tightrope between being informative and explanatory without being dull or mere repetitions of the text. They also exhibit a sly wit, and function almost as a send-up of the usually pointless pictures that accompany many of the books that Wanting will be nestled alongside in the Popular Philosophy/Psychology sections of a bookstore. Wanting is in that popular nonfiction world but not of it, as it presents the reader with far more than the standard bullet points, upsells, and pablum cloaked in name-dropping and narrative.

While such works may discuss goal-setting, say, or self-improvement, Wanting gets to what lies behind such things. These desires are very often “thin” and as such are highly mimetic, contagious, and shallow. They are part of the problem, which is why many attempts at change—both personal and systemic—end up being a mere succession of sprints and strolls on the hedonic treadmill. What is needed, Burgis argues, are “thick” desires, which can only be discovered and nurtured through the transcendent, difficult, and deeply anti-mimetic fostering of empathy, as opposed to the shallower and much more common practice of sympathy.

This is all convincingly laid out, and the possibility of descending into soporific triteness is a further potential pitfall that is successfully navigated. There are no easy solutions here, no absolutes, and the fact that thick and thin goals will always coincide in a state of tension is acknowledged, as is the nature of our own fallibility and mimetic tendency to envy. While it is possible to develop some real machinery in our guts, such machinery needs constant oiling and monitoring and is prone to malfunction. Again, such is the human condition.

This is a book on delusory human desires that is run through with clear-eyed and honest hope. The solution to the mimetic chaos of a world of thin desires is to create thick desires. And thick desires can only grow via hope. Without the belief that good and difficult things can be achieved in the future there can be no hope, and with no hope no desire. Just as the momentum of the mimetic cycle can be destructive if we are all driven by the belief in the selfish and absolute primacy of our own desires, so too can it be a constructive and positive and virtuous cycle if via empathy we are all driven to become “in some sense midwives to the thick desires of our neighbors.”

If ever there were a message that needs to be spread in this time of escalating conflict, scapegoating, polarisation, and the primacy of the mentality of the mob this is the one. And fortunately, given the engaging and empathy-driven nature of Wanting, I suspect Burgis’s solutions will indeed lead many people to strive to become more anti-mimetic. I’m sure that would have pleased and amused the late Girard to no end.

Thomas J. Bevan is a story writer and essayist. His weekly essays can be found at thomasjbevan.substack.com.