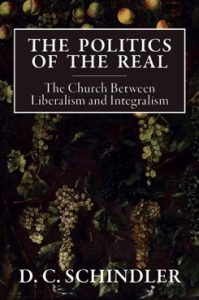 The Politics of the Real: The Church Between Liberalism and Integralism
by D. C. Schindler.
New Polity Press, 2021.
Hardcover, 349 pages, $45.

D. C. Schindler’s new volume The Politics of the Real is one of the most stimulating works of Christian political philosophy of the past few years. At a time when ongoing debates over the relationship between the American Founding and the Christian tradition seem to have stalled—with the partisans of various views firmly entrenched in their positions—it is a genuinely groundbreaking contribution, and one that deserves to be read far more widely than it probably will be. Schindler’s project—articulating a comprehensively Christian approach to political theory firmly rooted in Christian metaphysics, without recapitulating old philosophical errors—is undoubtedly enormous, but The Politics of the Real is largely up to the challenge.

Schindler himself is situated in an interesting place within Christian debates over political theory. While he has no interest in shoring up the contemporary liberal imperium, Schindler’s works reflect a kind of “left-integralism” quite different from the Schmittian version espoused by Edmund Waldstein, Adrian Vermeule, and others. The Politics of the Real is accordingly a critique of both “liberal” and “integralist” approaches to Catholic political thought, one that seeks to proceed by way of a radical rethinking of the metaphysical terms of debate. What if, in the end, the integralists are too stuck in modern conceptual categories? Schindler dares to ask precisely that.

It’s effectively impossible to do justice to the scope of this book in any brief review: The Politics of the Real proceeds by outlining a series of densely layered arguments rooted in the Thomistic metaphysical tradition, and any one of these would require a treatment the length of a full journal article to parse in full depth. But the broad thrust of the volume is clear enough. Like many self-identified postliberals, Schindler openly accepts the claim of Patrick Deneen and others that something called “liberalism” has failed utterly, giving rise to a host of public and private pathologies and requiring an alternative.

Notably, though, where other critics of liberalism tend to hedge about the exact definition of the concept they’re criticizing, Schindler begins by defining the term with elegant simplicity:

[T]he very essence of liberalism is the rejection, not of “Christian faith,” but specifically of the Catholic Church, insofar as the Catholic Church is the actual presence of Christianity in history, or in other words insofar as it is the faith as having come to bear on concrete human existence, embodied in the world.

This, according to Schindler, is a simple historical fact: Enlightenment thinkers emerged in an intellectual milieu that rejected any recourse to the Church as a legitimate source of authority. As straightforward as that definition is, though, Schindler’s conception of what counts as “liberalism” is rather different than what the average person (or political theorist) likely understands as “liberal” (are confessionally Orthodox states thereby “liberal”? Or Islamic ones?).

This overarching assumption—that the only real political choice is between Catholicism and liberalism—becomes more problematic once Schindler undertakes his metaphysical critique of liberalism (and, by extension, the American Founding). For Schindler, the Declaration of Independence’s talk of “nature’s God” is no theistic bulwark against secularism, but rather a distillation of America’s original metaphysical error: in place of the God of Thomistic metaphysical realism, who reveals Himself in the order of real and tangible things (specifically, the Catholic Church), the Declaration substitutes an Ockhamist appeal to indeterminate, unactualized divine power. Just as the hypothetical “state of nature” that grounds much liberal political theory has never actually appeared—has no actual referent—“nature’s God” is always a deus absconditus.

But must this necessarily be the case? I’m reminded of a lecture I once heard from former D.C. Circuit judge Janice Rogers Brown, who argued that the American Founding was a synthesis of three civilizational traditions: Athens, or philosophical reason; Jerusalem, or transcendental monotheism and the divine presence in history; and London, or scientific inquiry. The judge’s point is well taken: woven into the Founding is the tradition (and yes, it is a tradition—a point that Alasdair MacIntyre is keen to develop in Whose Justice? Which Rationality?) of Anglo-American empiricism. That tradition allowed that meaningful reasoning about the divine and about natural law could proceed by careful, disciplined study of the actual created order. As Michael Polanyi argued, the natural scientist stands within an actual tradition of inquiry no less than does the theologian: “nature’s God” may require no ecclesiastical intermediary, but this divinity is nevertheless always already in actu, superintending an ordered cosmos, and His designs may be sought in that order and invoked in the political sphere.

Note that this approach to the theological-political relation is not—as Schindler would have it—a bracketing-out of theological claims from public reason tout court (à la Rawls), but rather a limitation on the de jure entrenchment of theological claims not reasonably resolvable on broadly empirical grounds. Now, one might reasonably claim that this is rather theologically thin on the ground, but it is still a species of “politics of the real” capable of affirming a genuine metaphysical center.

In the end, perhaps the strict Catholicism/liberalism dialectic on which Schindler insists is less than helpful to his larger project. For Schindler and others committed to this sharp binary, the failures of liberalism are reflected in its allegedly rotten fruit; ergo, a wholesale philosophical “re-founding” is in order. Liberalism’s “inner logic” is demonstrated by its real-world effects. But how far back should this theoretical genealogy stretch? How, one wonders, did not the “inner logic” of medieval Christendom itself culminate in the emergence of the very liberalism that Schindler rejects? Whether one chooses to blame the fateful transition towards modernity on the univocity of the theology of Duns Scotus, the rise of nominalism, the Reformation, the Enlightenment, or the American Founding, all of these events are moments within a relatively unified Western tradition. And intellectual movements do not emerge ex nihilo.

Implicit in critiques like Schindler’s is the notion that “liberalism” is functionally a sort of alien ideology that colonized the West at some point, rather as if it were imposed upon Christendom by representatives of an entirely different metaphysical tradition, but a bigger-picture view suggests that the seeds of modernity were always in some sense present in the Christian tradition from the start. To name just one example, in last year’s American Awakening, Joshua Mitchell laid out a compelling argument that contemporary identity politics—which tend to reflect the “metaphysical disorder” that Schindler and company deplore—grow out of subconsciously Christian conceptions of guilt and responsibility and atonement, notwithstanding their alleged secularity. This isn’t to say that intellectual course correction is impossible, but merely to suggest that hypostasizing a concept like “liberalism” and opposing it to “Christianity” doesn’t really do justice to a complex causal story.

Instead of attempting to define the “essence of liberalism” and leveling endless broadsides against it, perhaps a more productive analytical approach might begin by highlighting the enduring tension between authority and liberty that persists in any political system composed of finite human beings lacking full comprehension of the Good. From that vantage point, one can argue that in certain respects, contemporary culture has lost the sense of necessary limits that allow an individual life to be “well lived” and that are inherent in any acknowledgment of the common good. (While not wholly proceeding beyond the liberal/nonliberal dyad, Sohrab Ahmari makes some constructive moves in this direction in his new book The Unbroken Thread.)

Finally, I am not so sure it is possible to entirely “unthink” the questions of legitimacy of authority and authenticity of individual life that modern liberal political theory has opened up. It is essential to note here that Schindler (and scholars of his same stripe such as historian Andrew Willard Jones) broadly rejects talk of “sovereignty” as illicitly embedding a liberal assumption of the impossibility of legitimate authority. Better, rather, to conceive of public authorities as restorers of an essential ontological peace, rather than as agents of coercive force. But this does not really answer the question of whether the metaphysics of the “divine right of kings” are even capable of meaningful retrieval in an age where a populace steeped in democratic norms has learned to ask the question “is the sovereign actually acting as he ought?” To put it bluntly, “who says all feudalism is God’s feudalism?” And more to the point: must a Christian politics be rooted in a pre-critical view of the authority of the temporal ruler?

So too, Charles Taylor persuasively argued in his little book The Ethics of Authenticity that there is indeed a genuine good being sought when individuals seek to live consistently with their internal convictions, even if this can be carried to a destabilizing extreme. Is it really sufficient to simply invoke Charles De Koninck’s dismissal of “personalism” against arguments like Taylor’s, or is there the risk here of repeating the fundamental utilitarian mistake, by conceiving the common good too homogeneously and then justifying gross abuses in the name of its primacy? To the extent that the historical emergence of “liberalism” (however conceived) has created a horizon within which these questions can be asked, that doesn’t seem too unsettling—though this is not to suggest that liberalism represents the “end of history.”

Notwithstanding these open questions, though, The Politics of the Real is a volume that’s vastly superior—both intellectually and rhetorically—to almost everything else in this particular recent branch of political philosophy. Whether or not one accepts all of Schindler’s premises, this book constitutes a sustained attempt to develop a comprehensive political theory that refuses to legitimate the metaphysical fragmentation of the contemporary world without simply trying to replay the dynamics of medieval Christendom. In particular, one of the real high points is Schindler’s argument for an approach to property rights rooted in an analogy to the relationship between the soul and body: property is that “parcel” of the world to which the individual has a unique custodial responsibility, not some abstract claim inhering nowhere in reality and entailing no duties.

Furthermore, Schindler’s critique of contemporary integralism (from within the Catholic tradition) is probably the best one on offer anywhere. For Schindler, leading integralist Edmund Waldstein’s foundational definition of integralism—which centers on the subordination of the “temporal power” to the “spiritual power”—erroneously confuses the contingent historical forms of medieval Christendom for an enduring theological principle. Specifically, the definition treats the Catholic Church and temporal state as entities subsisting on the same ontological “level” and so in some sense vying for control of the same monopoly on coercive power. Schindler insists that this mischaracterizes the essentially analogical relation between church and state: the Church is relevant to all of life, and the political order is relevant to all of life. The temporal order is not neutral or second-order ground, but ought to be understood as “theological” through and through, with the Church serving as an enduring witness to transcendent truth.

Agree with his arguments or not, virtually no one engaged in debates over “liberalism” has thought as deeply as Schindler about the fundamental metaphysical questions involved, and yet it’s those questions that must be addressed for any conversation to meaningfully progress. The Politics of the Real dares to confront them head-on, and that is something well worth celebrating.

John Ehrett (J.D., Yale) is editor-in-chief of Conciliar Post. His writing has appeared in The American Conservative, Washington Monthly, and the Claremont Review of Books, among other venues.