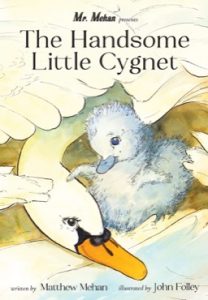 Once upon a time in the city, there was a handsome little cygnet whose parents loved him very much. So begins Matthew Mehan’s newest illustrated children’s book, following on the success of his critically acclaimed Mr. Mehan’s Mildly Amusing Mythical Mammals. Mehan, a humanities professor currently serving as the Director of Academic Programs for Hillsdale in D.C., joins creative forces a second time with Boston-based illustrator John Folley. Their first work was an Amazon best-seller, a world-building tour de force that led young readers through a Seussian menagerie of creatures from A to Z. The Handsome Little Cygnet is less ambitious, but no less lovely in execution. As a team, Mehan and Folley set a high bar of craftsmanship, refusing to talk down to their target audience and weaving layers of detail into each stroke of pen and brush.

The storyline has shades of “The Ugly Duckling,” but in some sense it inverts the fairytale. Where the duckling suffers bullying and runs away from home to find himself in the wild, our little cygnet is already quite, well, handsome, and quite well loved by mother and father swan. They nurture, protect, and delight over him, while warning him not to wander away. He can’t imagine why he would ever want to do such a thing. This is good, says father swan. But a little cygnet’s heart can lead him astray.

The swan family is based in Central Park. The illustrations are a New Yorker’s garden of delight, full of Easter eggs. All the seasons of the city are captured, as the cygnet is born in spring and waddles through full-blooming summer, content not to wander. Until one fall day, something catches his eye: a patchwork of graffiti covering the stone wall beneath a bridge. He must investigate. Mother and father are not looking. And so he swims away, unnoticed.

Up close, our young hero is dazzled by the towering creation of still-wet paint, not noticing the detritus of waste and decay strewn around him (a discarded N95 mask serves as an understated pandemic nod). “So many colors,” he exclaims, “and I’m only gray.” As he stares transfixed, his eyes become a kaleidoscope, swimming with all the colors of the rainbow.

It is at this point that we suspect the creators are up to something slightly more than a cute modern fairytale. This, of course, is par for the course in children’s literature, particularly in our current milieu. But what’s good for the goose is good for the gander—as it were.

It’s a fine line to walk. No doubt some, perceiving Mehan’s subtext, would take strong issue with lines like the little cygnet’s agonized cry as he comes swimming back to his mother after a roll in the paint. His downy gray feathers are now stained all over greenish-brown, clumped together, drying quickly. “I thought I should try to be something I’m not,” he laments in tears, “and now look at the ugly brown stains I have got!”

The mother swan’s heart is broken. “O my handsome little cygnet,” she says sorrowfully, “I’m not sure I know.” She speaks for many mother swans. My heart grows heavy as I read, thinking about one little cygnet in particular from my own memory, also very handsome, also very loved. Father swan was a pastor. The family was large. The church was kind. It wasn’t enough.

But we live in a culture that takes “The Ugly Duckling” as its base text for all narratives about identity. The young man who struggles is struggling because he is confined, prevented from becoming who he was always meant to be. This narrative of becoming, even if it means overriding parental wisdom, manifests even in benign children’s entertainment. Film critic Steven Greydanus has coined the phrase “Junior Knows Best” for this trope in PIXAR and Disney productions. In its darker manifestations, the message is hammered home that however Junior stumbles on his way to destiny, whomever he hurts along the way, all blame must finally lie with those who repressed his True Self when he first tried to express it.

Mehan offers a different vision, a vision that can serve not only as an inoculation for the young, but as a gentle warning for their parents. Mother and father swan are not to blame that their little cygnet is prone to wander. They may lavish all the love in the world upon him, only to find themselves wondering if it was all for nought, if it was all wasted. Mehan prepares their hearts for this, even as he reassures them that nothing is wasted.

If I have a complaint about the book, it’s that it ends too soon. The resolution is touching and richly symbolic in execution, yet I found myself wanting it to be deferred somewhat longer, for our small hero’s journey to take him somewhat farther. But this is a complaint of omission. In its final form, The Handsome Little Cygnet is a welcome arrival in a culture whose literary subtext has given a monolithic agenda pride of place. With wisdom and subtle grace, Mr. Mehan shows how two can play at that game.

Esther O’Reilly is a widely published freelance writer and cultural critic. Her work has appeared in The Spectator, Plough, and The American Conservative, among other outlets.