Education as a Moral Enterprise 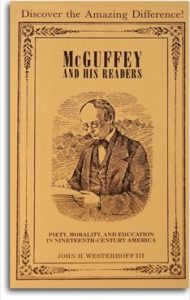 In the history of education in America, many Americans no longer know how common schools became more than an idea. Nor do they know who made the first strides in these efforts.

Thomas Jefferson attempted to establish a decentralized public school system more than once, a plan based on localized districts within counties. In his 1778 “Bill for the More General Diffusion of Knowledge,” he stressed the need for vigilant citizens who would constantly be on guard against the ambition of rulers, especially at the state or federal levels. Jefferson wanted to educate all students as future citizens in a republic and at the same time provide expanded opportunities for men to develop into the future political leaders of Virginia.

At his 1838 Lyceum Address in Springfield, Illinois, Abraham Lincoln advocated that schools should teach a reverence for our American democracy: “Let reverence for the laws be breathed by every American mother, to the lisping babe, that prattles on her lap—let it be taught in schools, in seminaries, and in colleges; let it be written in Primers, spelling books, and in Almanacs;—let it be preached from the pulpit, proclaimed in legislative halls, and enforced in courts of justice. And, in short, let it become the political religion of the nation.”

Building on this idea of citizenship, William Holmes ​​McGuffey (1800–1873) strove to openly cultivate Christian character by developing readers in the growing American West independent of British influence. The McGuffey Readers introduced students to the classics, to morality, and to good character. Seven million readers were sold before 1850 with thirty-seven states adopting them by 1890. McGuffey’s influence held for decades.

In his examination of McGuffey’s life and curriculum, John H. Westerhoff weaves a biography within a fascinating history of education in the early 1800s. The idea of common schools was growing. Westerhoff’s research clearly shows how McGuffey and his original Readers made a significant impact on nineteenth-century education through the use of moral teaching, civics, story, and phonics.

But more than the publication history of McGuffey’s Readers, Westerhoff also introduces us to a controversy. William McGuffey wrote and edited the first three editions before 1857. He did not contribute to or approve of the fourth and later editions after that time, those that bore the name of his younger brother Alexander. The revisions in these were significant. Gone were the references to a biblical worldview, salvation, and righteousness. McGuffey’s Presbyterian Calvinist views were wiped away to embrace a pluralism, the “melting pot” of middle class America, that Westerhoff calls a “civil religion.”

Westerhoff’s research examines other school readers of the time as well as the criticism of McGuffey’s first editions. Some critics argued that McGuffey didn’t include enough religious doctrine so that his books could be used in Catholic schools. Others felt only one denomination was represented and it was thus too sectarian for public schools. Still others claimed McGuffey was trying to control what children thought.

And this is why Westerhoff returns his narrative to the life of McGuffey. He argues that we must understand the man, his upbringing, and work in order to understand his Readers. A descendant of Scotch-Irish pioneer farmers, William McGuffey was born into a religious community in the Ohio Territory in 1800. He was schooled by his mother for a time and worked alongside his father on the family farm. As the nearby city of Youngstown, Ohio, grew, so did William’s educational opportunities. The new Presbyterian church began a subscription school, the start of a series of relationships with ministers and education.

Westerhoff continues a limited biography, clarifying what is known about William and what is unknown about his other educational experiences on the frontier. At the age of fourteen, William McGuffey began his first school with forty-eight paying pupils before moving on for more schooling for himself in Darlington, Ohio, and at Washington College in Pennsylvania, before taking a position teaching classical languages at Miami University in Oxford, Ohio, for ten years.

McGuffey married and had children before pursuing seminary. By 1829, he was ordained in the Presbyterian church, becoming known for sermons on character and behavior. At the same time, he continued as chair of philosophy at Miami. By 1830, McGuffey began arranging neighborhood children into groups to “try out” lessons and stories on them.

In 1833, McGuffey signed his first publishing contract with Truman and Smith, a small firm seeking to expand as a school publisher. He continued to work with them and briefly became president of Cincinnati College in 1836, followed by work at Ohio University and the University of Virginia. Here, however, Westerhoff draws an unexpected conclusion. He asserts that McGuffey’s ten years, from age twenty to thirty, at Miami University were the most important in his life. All of the university work to follow was insignificant. Given that Westerhoff has already admitted to a minimal biography and other limited reports, I find that a difficult claim to swallow.

With that, Westerhoff returns to the Readers, to McGuffey’s legacy, for the final portion of the book. McGuffey’s standards are clear: God is creator, preserver, and governor. His handiwork, his presence is evident in each lesson. Nothing can be understood without God. The Readers affirm the insignificance of this world and the greater importance of the next. Our eternal end is most important. The Fourth Reader in particular explains more of our relationship to God and how sin separates us from him, all of which is removed by the 1836–37 editions. As Westerhoff writes, “To ignore the theological worldview in the first editions of McGuffey’s Readers is to miss their significance and misunderstand their content.”

By the last chapters, Westerhoff’s book has become an anthology, a collection of reproduced lessons from the First through Fourth Readers as they originally appeared. More than anything, these samples prove Westerhoff’s point. It is decidedly clear that the later editions were sanitized, and I’m inclined to believe Westerhoff and his line of evidence. He implies that most mentions of God and biblical references are removed for the benefit of sales. And this, before 1850. It astounds me that this type of reasoning, even then, held sway.

McGuffey and His Readers: Piety, Morality, and Education in Nineteenth-Century America is just that—a unique survey of all these things, but most especially of the quickly changing tide of American education through the life of a Christian man and his schoolhouse legacy.

A classical high school English teacher, Christine Norvell is a senior contributor at The Imaginative Conservative and author of Till We Have Faces: A Reading Companion.