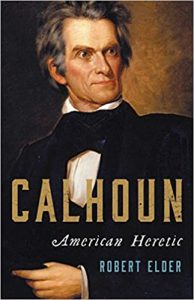 In his 1953 opus The Conservative Mind, Russell Kirk summed up John Calhoun’s contribution to intellectual conservatism succinctly when he noted that the South Carolinian made his mark articulating and defending “the rights of minorities.” To many readers in the twenty-first century the notion that a slaveholder committed to the racist social milieu of the antebellum might be a defender of minority rights strikes them as specious at best or at worst a sort of nefarious apologetic for southern slaveowners. Calhoun’s commitment to what he perceived as liberty—his and his fellow southern slaveholders’ uncontested right to property in human bondage—converted him into what Kirk called the Early Republic’s “most resolute enemy of national consolidation and of omnicompetent democratic majorities.”

Robert Elder’s Calhoun: American Heretic offers not only a comprehensive biography of Calhoun, but also the first substantive engagement with Calhoun as a thinker in nearly seventy years. Elder’s biography is critical. Calhoun’s statesmanship is not held up as an ideal. Nor does Elder offer Calhoun as a model. What this biography excels at is placing Calhoun’s ideas at the forefront of his political life without sliding into anachronistic screeds or moralizing editorialization. Elder argues that Calhoun cannot be seen merely as a benighted foil to an inevitably free and progressive America, but instead that the Carolinian was a major player in the broader American story.

Calhoun believed he grew up with the Union and the chronology of his birth played into that narrative. His parents were not native-born Americans and the Calhouns’ social and intellectual formation occurred not in North America but in Ulster, modern Northern Ireland. The Calhoons—they didn’t spell their name Calhoun until after they settled in North America for some time—imbibed the ideas of the Scottish Enlightenment and Whiggish political thought. Common sense realism and republicanism both lay downstream Irish Whiggery and both influenced the Scots-Irish community that eventually settled in North America. Calhoun’s parents initially arrived in Philadelphia but made their way south, first to Virginia but eventually to the South Carolina backcountry. Calhoun’s father Patrick prospered, and much of the prosperity lay in the labor provided by bound human chattel. In every locale the Calhouns lived in slavery remained legal. Slave-owning was not tangential to their experience in British North America. It was foundational.

The biography’s thesis—that Calhoun was not a fringe figure but an integral part of the larger discourse regarding the nature of American republicanism during the first half of the Nineteenth Century—is fully treated by Elder in his section on Calhoun’s education. The future statesman studied at the academy of Moses Waddel, a respected Presbyterian minister, before he matriculated at then Yale College. At the academy Calhoun read works that would have been typical for any preparatory curriculum. Horace, Livy, Plutarch, Seneca, and other classical works shaped the mind of the adolescent Calhoun. He performed well enough at Waddel’s academy to earn admission to Yale where he also distinguished himself. In New Haven, Calhoun proved to be a capable student. His politics, however, stood out and drew him to the attention of Timothy Dwight IV, Yale’s imperious orthodox Calvinist and politically Federalist president. Calhoun openly extolled the virtues of Thomas Jefferson. In one sense that might have been the most heretical position Calhoun held while he was at Yale. But he also changed religiously in subtle, almost imperceptible ways. For all the differences in the politics of his Republican father Patrick and the Federalist Dwight, both of those men held to the orthodox Calvinism that typified New England and the Calvinist backcountry of Carolina in the eighteenth century. Calhoun, though, rejected Dwight’s politics, and his father’s religion. By the time he entered public office, Calhoun identified as a Unitarian.

Elder, unlike previous biographers, does not breeze by Calhoun’s religiosity. He sees it as a telling part of who Calhoun was and how Calhoun stayed in the center of American political and religious change in the Early Republic. Calhoun’s politics during the first three decades of the nineteenth century, in fact, constituently wedded economic and political nationalism. He was far from a reactionary during his early years in Congress and then during his time in Monroe’s cabinet. He battled the ultra-conservative Old Republicans, led by Virginia aristocrat John Randolph of Roanoke, in the years before and after the War of 1812. Surprisingly, for more than two decades Calhoun was not an arch-Calvinist sectionalist; he was a Unitarian nationalist. In his native South Carolina, backcountry Jeffersonians like William Smith accused Calhoun not of religious infidelity but of heresy against the republican creed he imbibed as a youth. He favored a national bank, internal improvements, and even tariffs in the interest of perpetuating economic nationalism. South Carolina’s planters, he thought, should accept unpopular tariffs in the interest of maintaining the independence of American manufacturing from undue influence from British imports. In the 1820s, Calhoun sounded more like a capitalist progressive wedded to American material progress than a reactionary southerner defending a reactionary social order.

The extent to which Calhoun changed receives necessary attention from Elder. In previous biographies—even in good ones—Calhoun strides across the American political stage as an unflappable ideologue wedded to his own understanding of antidemocratic republican politics. The idea of Calhoun as a cast-iron man is pervasive but, as Elder capably shows, ultimately wrong. Calhoun’s political dexterity helped him stay in the center of political discourse in the United States from his entrance in politics in 1811 to his death in 1850. Throughout his political career he maintained that slavery constituted a beneficial social institution that improved the lives of the enslaved Black men and women as well as their enslavers. Unlike the preceding generation of Americans—including southerners—Calhoun fought to maintain the institution in the abstract with a vigor that surprised his southern colleagues. Elder notes that it was another southerner—Virginian William Cabell Rives—who rebuked Calhoun’s 1837 speech declaring slavery a “positive good.” No matter what political position Calhoun took, he made sure it defended chattel slavery in the southern states. Nonetheless, Calhoun believed that the United States was a safe haven for human bondage; unlike his political successors, he didn’t need a southern republic to prop up chattel slavery. The American Union, provided it stuck to the Constitution, would serve just fine.

While defenses of slavery and the fear of untrammeled democracy seem horrifyingly anachronistic to modern readers, they allowed Calhoun to see the liberal revolutions in Europe during 1848 more clearly than other American commentators of the era. Calhoun feared liberal democracy. He believed that liberalism must inevitably destabilize the regimes of Europe and urged his senate colleagues to be more judicious in their praise for liberal nationalist movements in the middle of the nineteenth century.

In the last twenty years of his life Calhoun devoted his political energies to the maintenance of a slaveholding southern regime that increasingly understood and feared its status in the American union as a minority. Elder does not claim that Calhoun was in any way a far-reaching ideologue who thought his ideals might be used to create a more egalitarian racial or social order, but he does note how Calhoun’s anti-majoritarian ideas and rhetoric were co-opted across the political spectrum in the nineteenth and twentieth centuries.

Calhoun’s legacy in the twenty-first century, Elder notes, is diverse but ultimately tied to the racialized politics of the Early Republic. In the aftermath of the racist murder of parishioners at Mother Emanuel AME Church in Charleston in 2015, the winter of 2020/21 the city of Charleston dismantled his statue overlooking the city’s Marion Square. No matter how dexterous his political rhetoric or ideals were during his time, they cannot escape the legacy of race and slavery. Elder reminds the reader that even though Calhoun should not be honored, he must not be forgotten in order for Americans to truly understand our history. This excellent biography will ensure that he is not forgotten any time soon.

Miles Smith IV is a Visiting Assistant Professor of History at Hillsdale College.