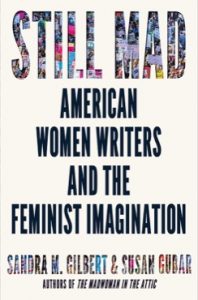 The title of the work under review hearkens back to The Mad Woman in the Attic: The Woman Writer and the Nineteenth-Century Literary Imagination (1979), the authors’ groundbreaking exploration of writers such as Jane Austen, Charlotte and Emily Brontë, Christina Rossetti, George Eliot, Elizabeth Barrett Browning, and Emily Dickinson in the context of second-wave feminism. In the male imagination, Gilbert and Gubar argued, women tended to become angels or monsters, depending on the family dynamics and cultural norms that governed these women writers’ lives. This was a breakout book, liberating Mr. Rochester’s mad wife in Jane Eyre from a literary incarceration that women writers struggled to overcome.

Still Mad lacks its predecessor’s coherence and powerful drive to dominate the discussion of how women writers have been received. This new book has a disjointed feel as Gilbert and Gubar take stock of a huge range of figures from Susan Sontag and Sylvia Plath to Lorraine Hansberry and Toni Morrison, with side trips to literary critics and theorists like Julia Kristeva and Eve Kosofsky Sedgwick, singers like Nina Simone, and polemicists like Germaine Greer, Gloria Steinem, and Betty Friedan. Dozens of other writers make their appearance—often, as is the case with Plath and Sontag, in potted accounts drawn from a single biography lacking in nuance. It does not seem plain to Gilbert and Gubar, for example, that Sontag was primarily an opportunist with no coherent idea of feminism other than rather silly proposals about protest that no diligent movement person would spend much time on, or that Sontag herself practiced. And Plath was no feminist either, although of course one can make of her life a feminist fable as Robin Morgan (who gets her due in this book) did. Plath railed against single “career women” and saw no contradictions in becoming a wife and mother and writer. Both Plath and Sontag are in the book because they have to be in the book—not because they are part of some overarching design.

So what are the authors still mad about? The same thing those in MeToo are mad about. You might well guess Gilbert and Gubar are still mad at misogyny, which played a big part in Hillary Clinton’s defeat, as they argue at the beginning and end of their book, predictably excoriating Donald Trump as a man who is no better than he should be—to use that old phrase from nineteenth-century novels as applied to “common” women. But you would be mistaken if you think Gilbert and Gubar offer up some kind of simplistic takedown of the patriarchy. The best parts of this book are their honest and shrewd understanding of how feminists undermined their cause by attacking each other when they were not descending into an incoherent and contradictory set of ideas. In short, this is hardly a book for true believers who will brook no criticism of the cause. Anti-feminists are acknowledged in this book—conservatives like Joan Didion, for example, and astute organizers like Phyllis Schlafly and bomb throwers like Camille Paglia.

The most engrossing parts of this book have to do with feminist science fiction. Here I have to confess my vast ignorance of the genre, which Gilbert and Gubar explain in riveting detail. I will mention just one example, a section on N. K. Jemisin, the author of the Broken Earth trilogy, which won the Hugo Award for Best Novel in 2016, 2017, and 2018, the only time a writer has managed this feat. Her novels take place on a planet suffering environmental disasters worse than climate change, with a remnant ruling class that enslaves the orogenes, who are used as tools to mitigate ecological catastrophe. In fascinating detail, Gilbert and Gubar show what happens when Jemisin takes the vision of Rachel Carson in Silent Spring to its logical conclusion. It is surprising, therefore, that Gilbert and Gubar do not make more explicit an argument for the essentiality of science fiction as a way to explore past and present but also to transcend current arguments.

Your politics may be in tune with this book, or maybe not. I don’t think it matters. Read Still Mad for its well-told load of information and don’t find fault with it because it is not a social history of feminism. For that kind of book Gilbert and Gubar recommend Ruth Rosen’s The World Split Open: How the Modern Women’s Movement Changed America (2000). Feminism did change America, Gilbert and Gubar might say, but not enough. At any rate they do what they promise: “We tried throughout to capture not only the pioneering achievements of second-wave feminism but also sometimes the edgy, dialogues, disagreements, and divisions within feminism, most of which ended up enriching the collectivity that feminists seek to foster and promote.” That last part about “enriching the collectivity” may be a tad hopeful, but I leave that judgment up to you.

Carl Rollyson is the author of The Last Days of Sylvia Plath (2020) and with Lisa Paddock, Susan Sontag: The Making of an Icon, revised and updated (2017).