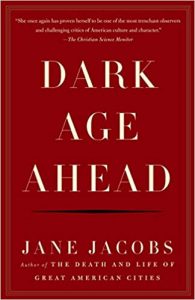 A reflection on Dark Age Ahead, by Jane Jacobs (Random House, 2004)

“Hindsight may well expose my blind spots,” Jane Jacobs, the famed urbanist, wrote in Dark Age Ahead, the last book she wrote before her death at the age of 89.

As a final missive, Dark Age Ahead compresses thoughts found in Jacobs’s previous work and leaves readers with a stark, dark warning about North American societies. In short: cultures that forget themselves perish, and there is no reason why our own culture will not succumb to mass amnesia and wander into the blights of a new dark age.

According to Jacobs, to vanquish darkness a civilization must constantly reinforce the pillars that support it. The most important of these pillars is the family, what Jacobs describes as the “ur-unit of culture.” Cultures that do not nurture families extinguish themselves. This logic reaches beyond the mathematics of population replacement. Successful cultures give families what they need to succeed: affordable food, clothing, and housing. North American societies, Jacobs notes, increasingly leave families to fend for themselves against systems hostile to the family unit. Half of marriages end in divorce. Housing in most North American cities costs more than an average middle-class family can afford. Food prices continue to climb, as do energy prices. Both parents work, and the dreams of a large family they once had have been safely shelved as fantasy. One or two kids will have to do. It is all that most parents can afford.

Without family to form the person, other institutions degrade. Higher education, Jacobs’s second pillar of culture, had already succumbed to credentialing when Jacobs published Dark Age Ahead in 2004. The slide toward credentialing accelerated in the late 1960s, she argues, but it began after the Great Depression. The Great Depression, a period Jacobs lived through and recounts in short autobiographical moments, altered the purpose of life for so many. Full employment became the point, the only point, for those who survived the idle meaninglessness of the depression. Higher education pinned itself to this point. Today, even students know the reason for university: to get a job.

The degradation of universities inevitably degrades the sciences, Jacobs’ third pillar and a key measure of civilizational health. Pseudo-science, irrelevance, and a closed-rank orthodoxy fill the vacuum when science evacuates, and charlatans enter when scientists exit. Jacobs singles out a whipping boy familiar to her readers—the traffic engineer—to illustrate what happens when allegiance to faith and paradigms get in the way of science. Rather than focus on destinations, traffic engineers like to create a nice drive for the daily commuter—even if that nice drive steamrolls neighborhoods and tears apart communities. Jacobs, who built her reputation as a thinker working independently from the university, says that other sciences similarly retreat into the ivory tower rather than subject their commitments to rigors of the scientific method. The public suffers the consequences.

Jacobs separates these issues but admits they connect. Society is a complex organism; the organs only work, and make sense, when they work together. The loss of a scientific mindset connects directly to the distortions of higher education and a revision in the meaning of life, and these tie to another of Jacobs’ concerns: an inability among learned professionals to self-police. As an example, Jacobs points to the reluctance among architects to criticize one another, and regards “the substitution of image for substance”—i.e., the credential—as evidence of failure among elites to hold themselves to account. Government, too, self-polices poorly—or, rather, they police according to their own interests. Engaged in “desperate cheeseparing,” these “kleptocracies” hold that public services should pay for themselves. The result: ugly architecture that no professional architect will criticize, a disconnect between what governments want and what people need, experts who ignore evidence, and bureaucrats who put themselves before the public they are supposed to serve.

The short 17 years of hindsight that have gathered since the publication of Dark Age Ahead in 2004 prove that Jacobs was mostly right: a dark age lies ahead for our civilization if we do not wake up to the threat of the “fifth demonic horseman”: Forgetfulness.

The wisdom in Dark Age Ahead radiates from Jacobs’s concern for home. Like other cultural critics, notably Robert Nisbet, whose The Quest for Community documents how loneliness creeps into a society, Jacobs sees the origins of social collapse in the loss of home. Home is a place of belonging. It is a place of love, the place where family lives. Governments that pave over built environments or set people so far apart physically that they cannot come together to build a joint home, a community, sow alienation. The alienated person does not care to stop the bulldozer threatening what ought to be his home. It is not his home anyway. His family does not live there. He might not even have a family. And so he shouts, “Tear it down!”

Jacobs’s solution is to save home. To save home, citizens must dig into the “tangible, boring details” of public policy that determine the course of society. She points to successful initiatives, like wise decisions in Brampton, Ontario, to attract to the area manufacturing that provides people good jobs, and singles out poor decisions, like rent control, that prevent the market (i.e., the people) from creatively solving housing problems through the construction of new rental units. She points, in the end, at the thing that first needs saving—the family—and shows how this keystone cannot be salvaged without rescuing the institutions that surround and support it.

Books that forecast the Apocalypse have a sameness to them. The End is Nigh, and Here’s Why. That is how they tend to go. Why read Jacobs after 17 years when so many new books hit the market each year?

One good reason: History has proven her right about so many things. She was right about inner cities. They do offer fertile neighborhood space so long as city planners in far away places are not so stupid as to bulldoze them to clear space for highways. She was prescient enough to see that the housing market would collapse, a disaster she predicts in a fleeting passage tucked into Dark Age Ahead.

From the perspective of 2021, the rot Jacobs saw in 2004 is now giving off thick fumes. In higher education, credentialing has given way to groupthink and indoctrination, with activists-educators attacking the idea that there can be knowledge, and most recently, claiming that math and Standard English are racist. With the replication crisis in the sciences, the Grievance Studies Affair in the Humanities, and the unpublishing of controversial papers, the peer review system—what is supposed to constitute professional self-policing among the professoriate—has shown itself unable to halt the rot. Self-policing among the corporate class is as dead as Jacob Marley (if it was ever alive), and governments in nearly every jurisdiction have worked to centralize power (a leading indicator of a sclerotic society, according to Jacobs). As for the family, it has continued to decline. Covid-19 lockdowns have aggravated the tensions tearing apart the family unit by bankrupting middle class businesses and feeding more into the mouths of opioid addiction, depression, and suicide. Physical distance is a disease, Jacobs says. After Covid-19, who can argue with her? And who disagrees with Jacobs that the only force that can stop carnivorous governments and predatory monopolies is a community that cares to protect its home?

Jacobs wondered what hindsight might shed on her Dark Age Ahead, and with the benefit of time it is hard not to see the obvious omission: the blame technology deserves for exacerbating civilizational decline. Jacobs, who died in 2006, the same year that Facebook and Twitter opened to public users, never got the chance to see how social media divided and conquered the population. Rather than confront the profiteering prophets who told us that social media would democratize knowledge, Jacobs stays safely within the boundaries of what she knew best: urban community development. Without an examination of technology’s threat, reading Dark Age Ahead today feels a little like walking the street with one eye closed or watching a movie when you know the ending.

Though far less readable than Jacobs, James Brindle’s 2018 New Dark Age picks up the slack by focusing exclusively on the darkness cast by technology. A technological society, Brindle writes, gives birth to technocrats who prize information above all else. Echoing Jacobs, he concludes that information is not a defense against dark ages. In fact, it darkens by creating the illusion of wisdom, a state worse than being stupid. “[T]hat which was intended to enlighten the world in practice,” Brindle writes, “darkens it.”

What will enlighten the world is honesty. “A society must be self-aware,” Jacobs says, and never deceive itself into believing it can survive without knowing where it came from, where it is, and where it is going. The self-aware culture raises an army of nurturers—storytellers, craftspeople, artisans, and teachers who know their culture and nurture in the masses a love and understanding of the patterns of life that distinguish their people. Cultures that cannot nurture the nurturers die. They might, in fact, kill themselves: “When a culture is rich enough and inherently complex enough to afford redundancy of nurturers, but eliminates them as an extravagance or loses their cultural services through heedlessness of what is being lost, the consequence is self-inflicted cultural genocide.”

We have not yet solved the mystery of our future. Jacobs’s final work lays down wisdom we have heard so many times before—wisdom that can, if heeded, steer society away from the coming darkness.