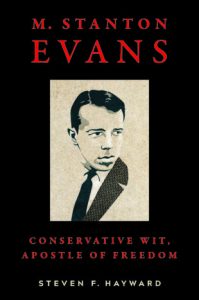 Reviewed by James A. Davenport.

Recently, I found myself working through a document that mentioned the name M. Stanton Evans. A colleague and I remarked to each other that if this person is mentioning Evans, he must really know his conservative movement history. Another colleague asked, “Who is M. Stanton Evans?”

What a difference between that scenario and this one:

Among the many little platoons of [Stan’s] fans was a small-time, rock-and-roll group of middle-aged guys who played regularly for fun at a bar in Eufaula [Alabama], a little town sixty miles east of Troy… The band, it turned out, never knew fully who their friendly fan was. After Evan’s passing, one of the band members called up Davis: “I never realized that ‘our Stan’ was M. Stanton Evans!

M. Stanton Evans is perhaps one of the most important and simultaneously most forgotten figures of the conservative movement. Once known by everyone from the President of the United States to a retiree band in Eufaula, Alabama, he is now all but unknown to the movement’s current generation.

It is this reviewer’s hope, and no doubt the author’s hope, that M. Stanton Evans: Conservative Wit, Apostle of Freedom will spark a renewed interest in this impactful journalist, philosopher, and leader. In this biography of Evans, Steven F. Hayward has offered not merely Evans’s story but what amounts to a history of the conservative movement through Stan’s eyes. Hayward presents much of the important history of this movement and highlights the vital role that Evans played in it all.

Evans found himself, and more often was called to, nearly every important engagement within the movement for decades. He identified Goldwater and Reagan before they were popular champions. He wrote the Sharon Statement (legend has it on the flight to Connecticut). He was President of the American Conservative Union (ACU) and gave us the first Conservative Political Action Conference (CPAC). He founded the National Journalism Center which, especially in the years he ran it, produced some great journalists.

Evans was truly a man of the movement and shaped the conservative world in which many of us now live. So why is he not the remembered hero that Buckley, Meyer, or others are? A few possibilities come to mind, though I admit none seem sufficient. As compared to Buckley in particular, Evans did not have a  God and Man at Yale type book, though he had his own version after his own Yale experience in the form of an article in The Freeman. Moreover, he did not have “Firing Line,” though he did have a nationally syndicated radio show.

Regarding Frank Meyer, Evans is perhaps less remembered merely because we think of Meyer as the intellectual father of Fusionism. This is not to discount Evans’s contributions (I am thinking especially of his essays in What is Conservatism? and Freedom and Virtue). Though, for posterity, it is perhaps important that Evans was a contributor and not the editor. Furthermore, much of Evans’s production and impact on the movement happened through his newspaper columns, which, as a genre, are fleeting and timely in a way that books often are not. To be clear, none of this is to disparage Evans; it is simply to consider reasons why he has not been remembered.

More than anything, though, it seems that the forgetting of Evans is simply a casualty of our ever forward looking and ever quickening world. We forget people. Far too often, we forget important people. And we should not expect those outside of our tradition, the tradition of conservatism, to remember our heroes and strong men—but we should. That is precisely why Hayward’s book is so important. Conservatives need to remember their own great figures, their own great books, their own traditions. If we forget them,  conservatism will be unmoored and lost as a tradition.

The language of tradition used to describe the conservative movement from Kirk and Buckley to Reagan is not popular today. Many think that it is time to move on from our prejudices against government action and love for market economics in order to beat back the left and restore some sense of American nationalism.

However, Evans, despite his role in that tradition, did not simply toe the party line. For example, Hayward notes throughout the book that Evans, though a staunch anti-communist, “didn’t accept Soviet claims at face value as did many conservatives who were prepared to believe the most pessimistic ‘news.’” This was a contrarian position to take when all the world did was worry about the Soviets. During the “Sputnik moment,” when the nation was nearly in a panic that we were falling behind the Soviets in science and technology, Evans, in a rare step, wrote several front page straight news stories about reasons to doubt Soviet claims of rocketry breakthroughs based on original reporting from several expert sources. While most panicked and took Soviet claims at face value, Evans remained a realist. He sought truth and hard facts, a staple of his reporting, rather than sticking to what we might call the “establishment” narrative.

Moreover, Evans was truly a man of the people. He was, in some ways, more populist than the populists. In Time magazine he described his philosophy as “pretty close to the farmer in Seymour, Indiana. He believes in God. He believes in the U.S. He believes in himself. This intuitive position is much closer to wisdom than the tortured theorems of some of our Harvard dons.” This is a major reason, Hayward notes, why Evans did not spend his entire career in Washington, D.C. Though his Capitol Hill apartment and work with the ACU, NJC, and Consumer’s Research brought him great notoriety in his day, he was never a man of the beltway.

In some sense, his work at Consumer’s Research is most representative of Evans’s free market populism. As editor, Evans set up an unsigned column in the magazine, “Dateline Washington,” that covered the Federal Trade Commission and the Consumer Project Safety Commission. Evans understood what can happen in the halls of federal government and he was always the first to report on some obscure government report or hearing. Evans relished the irony of running a magazine founded by a prominent New Dealer to support everyday consumers with reporting based on free market principles. Moreover, he did not just do it on principle—he “played the consumer angle to expose the political and bureaucratic interests behind many liberal crusades, such as climate change and anti-smoking rules.”

Finally, Hayward rightly takes note of Evans’s great wit and witticisms. Part of the lasting impact Stan left on his many friends and colleagues was his wit. Perhaps my favorite joke of his that Hayward relates is his quip about the Nixon White House. Evans was not exactly a fan of Nixon: “I wasn’t for Nixon until after Watergate… After wage and price controls, Watergate was a breath of fresh air. In fact, I called over to Pat Buchanan at the White House and told him, ‘If only I had known you guys were doing all this neat stuff …’”

Losing memories of figures like Evans is a casualty of rapidly changing times. Hayward’s engaging biography helps us avoid what would be a major loss to the conservative movement, an occasion to learn from an important figure—his triumphs, mistakes, and efforts. The conservative movement is small, somewhat insular, and to many in America, insignificant or unknown. Yet for those of us involved in it, we must know our own history lest our movement become unmoored and visionless. Revisiting M. Stanton Evans’s life is an entertaining and thought-provoking way to keep the conservative vision alive.

James Davenport is Assistant Editor of The University Bookman. He is a consultant with American Philanthropic.