Found in Translation: Capturing the Sublime with Ryan Wilson 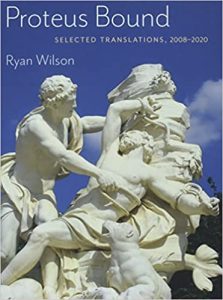 Ryan Wilson’s new collection of verse translations, Proteus Bound, dazzles when you try to grasp it. The whole collection is shot through with a beautiful variegation in poets, subjects, meters, style, and tone to wonderful effect. Like the book’s eponymous Proteus, it is many things at once. On the surface, it is an anthology reader in the Western poetic tradition. As his prefatory essay, “Proteus Among the Monuments,” suggests, this collection is also a discourse on the nature of translation, inspiration, authorship, poetry, the sublime, and the divine. It is at once an experiment in criticism and a guide to good taste. To the young, it is an invitation. To the middle-aged, a new friend upon the journey. To the old, it provides the balm of memory that orders and heals in the very act of remembrance.

Wilson’s wide learning is manifest in the variety of source languages: Greek, Latin, Italian, Spanish, French, German. But the English of T.S. Eliot is arguably the strongest influence in the collection as a whole. Eliot often appears explicitly in the preface and endnotes, and implicitly as the arbiter and critic of the tradition represented in this collection. For example, we meet the predecessor of Eliot’s J. Alfred Prufrock in Jules Laforge’s Lord Pierrot. Wilson’s endnotes instruct readers to consult specific verses of Eliot with the translations. While the collection can, and should, be enjoyed on its own, it is also, when pressed into service, a powerful handbook and hermeneutic tool for engaging many texts outside its collection.

Through practice rather than theory, Wilson is recovering a lost way of understanding the charm and power of an anthology, beyond the textbook and vanity projects that have predominated the market over the last century. One of my chief impressions when moving through its alphabetical collection, from Alcman and Aligheri to Villon and Virgil, was the similarity of its felicitous associations to the epigram anthology found in the Milan Papyrus of the Hellenistic poet Posidippus (early 3rd century BC). I am reminded as well of the Late Antique art of the cento, where Christian poets like Faltonia Betitia Proba (mid-4th century AD) wove odd verses from the pagan Virgil into an epic summary of the Old and New Testament. While some critics have decried the cento as an uninspired and unoriginal art form, few would dispute that Carl Orff’s selection of 24 of the 228 poems in the Carmina Burana deserves to be considered its own substantial and original contribution.

Wilson even suggests a name for this form of art in communion with art in the context of tradition: holometabole (from the Greek hólos, “whole, entire” + metabolé, “change, exchange, transfer”). He likens poetic holometabole to the Catholic mystery of the Eucharist. Just as Christ lives in the communicant, the translator and reader die to themselves so that Horace, Petrarch, Rilke, or Sappho might live in them.

As a Catholic who sometimes lectures on the intersection of Christianity and poetry, I would go a step further and say that holometabole is more than just an analogy. Poetry, like reception of the Word made flesh, is a meal where we both consume and are consumed. The recitation and memorization of poetry is a propaedeutic act directly tied to the central Christian mystery of deification — of being made God-like. In this sense, the act of studying and reciting poetry, regardless of the merit of the author or the subject, trains us in certain core virtues inherent in an anthropology where we are made in the image of a God who is logos.

The salvific nature of poetry finds a clear allegorical precedent in the myth of Orpheus and Eurydice which Proteus relates to Aristaeus in the penultimate translation in this collection (Virgil’s Georgics Book IV, vv.387-529). Orpheus by his poetry charms Charon and descends to the land of the dead. Pluto and all those who dwell in the land of Erebus stop in awe of his song. Even Cerberus ceases his barking. As C.S. Lewis remarked, noise and cacophony mark hell. Music, poetry, and silence are antithetical to the realm of Hades. By descending to hell to save Eurydice, the poet Orpheus anticipates Holy Saturday when the Word descended into Hell for the salvation of souls.

And yet there are limits to this method. Orpheus feels pulled to turn to see Eurydice just before the light. Virgil cannot mount to paradise with Dante. And while holometabole can produce a new and original work, we should not mistake the transformed translation for the original. As Auden warned,

The current of his feeling failed; he became his admirers.

Now he is scattered among a hundred cities
And wholly given over to unfamiliar affections,
To find his happiness in another kind of wood
And be punished under a foreign code of conscience.
The words of a dead man
Are modified in the guts of the living. (“In Memory of W.B. Yeats”, vv.17-23)

I say this not as a critique of Wilson, who freely admits that “though a translation inevitably fails, in some respects, its original, it may yet succeed as an individual poem.” Indeed, the translated body that poets like Catullus and Anacreon find themselves inhabiting in Proteus Bound is a new and glorified body. Gone are the frivolous poems at Caesar’s expense. There is no trace of the Catullus who detailed how Egnatius whitened his teeth.

Like Sébastian Slodtz’s sculpture of Aristaeus fettering Proteus featured on the cover of the book or the archaic torso of Apollo featured in Wilson’s selections from Rilke, the Classical tradition depicted in this collection is a fruitful fiction. In the case of Slodtz and Rilke, ignorance, willful or otherwise, of the polychromatic nature of ancient sculpture inspired something new and original. Art has always owed a great deal to these historical fictions. Without, for example, the misguided attempt of the Florentine Camerata to reconstruct Greek tragedy, we would have no opera. Art, as the muses told Hesiod, knows how to tell lies that point to the truth (Theogony, v.27).

Ultimately, what Ryan Wilson offers is a tradition that has largely been abandoned. The danger in abandoning this tradition, like abandoning religion, is being conscious of what takes its place. If we do not raise our children in this tradition, we do not render them free; we abandon them to a different, darker vision of the world. This world lacks the inspiring spark of poets like Leopardi and Rimbaud, and the shocking admissions of a Baudelaire or Heym. Without poets, as A.E. Housman said, “to friend us…on the dark and cloudy day,” we are left with the saccharine platitudes of sitcoms and the script-by-numbers emptiness of today’s superhero movies.

The Italian priest and educator Luigi Guissani spoke of tradition as a working hypothesis to understand the world. If you find another one that better accords with your experience, you take up that new hypothesis. As a latchkey kid from New Jersey, I happened to pick up Dante from the public library in 8th grade and discovered that I had been operating from the wrong hypothesis. I am glad to discover in Wilson someone also tending the flame of a living tradition rather than worshiping the ashes of the past or the cold vacuities of today.

Patrick Callahan is director of the Newman Institute for Catholic Thought & Culture and Assistant Professor of English & Humanities at St. Gregory the Great Seminary.