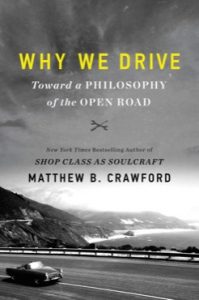 Why We Drive: Toward a Philosophy of the Open Road
by Matthew Crawford.
William Morrow, 2020.
Hardcover, 368 pages, $29.

“When you ride alone, you ride with Hitler!” So reads a famous American propaganda poster from World War II, depicting a natty joyrider with a ghostly Führer riding shotgun. It’s hard to see that message going over well these days. That such a poster could have been distributed or even imagined, well after the automobile and its notions of freedom had become widespread in American life, says something about both the urgency of the war effort then and the even more hegemonic power of the automobile today.

Why We Drive, a 2020 release from author and car enthusiast Matthew Crawford, explores the psychology of driving and the automobile. While not a doctrinaire libertarian, Crawford certainly embodies the American libertarian spirit: he is enamored of an earlier era in American life when things were less structured, less regulated, riskier, and more exciting. He chafes at the steady growth of government—whether questionable but expensive safety regulations or zoning regulations that prohibit backyard junkyards—and the hegemony of private technology firms alike.

Why We Drive is, in essence, two separate books. One is a masterful takedown of the self-driving car hype, a technology that, like fusion power, is always right around the corner. Crawford makes a devastating case that the self-driving car means the elimination of the human driver, and with it our conventional understanding of the freedom of movement, freedom from advertising, and the fruitful opportunity to hone the skill of driving, and tame the fearsome but exhilarating automobile.

But alongside this finely tailored critique is a longer meditation on risk, safety, freedom, and mobility. Crawford seems to be addressing his book to fellow car lovers, not to a general audience, and certainly not to regular cyclists, pedestrians, or people without cars. He implicitly treats the choice between traditional cars and self-driving cars as the fundamental transportation question, erasing the legal architecture of car dependency (read Greg Shill in The Atlantic for that history). At times, frustratingly, he nearly grapples with this, as in a short passage where he skims the evolution of the street from a public space to a space for the automobile. But this reads as perfunctory, briefly acknowledged so that it can then be ignored.

To an urbanist, and to anyone who cares about the impact of car dependency on American cities, American commerce, and the American poor, Crawford’s love letter to the automobile, abstracted from its actual consequences, feels like a kind of privilege, even cluelessness. Nearly every American understands the mythos of the open road. In his landmark study of roadside architecture, Main Street to Miracle Mile, Chester H. Liebs notes that the automobile driver, unlike the train passenger, can see straight ahead, and can essentially produce his own “movie” through the windshield, limited only by the road itself. This faint cultural memory, occasionally sparked by a retro neon sign or an empty straightaway, has never died, and it lives on for a reason.

But nothing is more opposed to this vision of the car than suburbia and car dependence itself. If New Urbanists and Smart Growthers have at times conflated the automobile with every urban ill, then defenders of America’s car-dependent and suburban-sprawl status quo have continually and incorrigibly made the equal and opposite error. They, and of course Detroit itself, have appropriated the joyful cultural memories of the open road and the miracle mile and the Wigwam Motel and the Howard Johnson’s and the family station wagon, and used it to perpetuate a system in which the adoption of the automobile is no longer a choice, and in which the carless become an inferior class. So it is that urbanist discourse can sometimes resemble Marxian analysis, with motorists and non-motorists transposed for capitalists and workers. This may sound dramatic, but it contains a grain of truth.

Here is a smattering of Crawford’s messy defense of the car: “To drive is to exercise one’s skill at being free,” he writes. On subsidized roads and with subsidized fuel? Suppose so. He characterizes bicycle activism as smarmy politics but automobile hegemony as the state of nature. He inveighs against the “safety-industrial complex.” He compares the driving commute to a “Sabbath,” supposedly the only true unclaimed time left in the day. At times, he breezily conflates needless risk-taking and petty lawbreaking with manliness. He claims to relish the anger and menacing of motorists when he illegally splits lanes on a motorcycle, oblivious, say, to cyclists who endure the anger of inconvenienced motorists with no alternative and at great physical risk to themselves.

If Crawford’s cavalier attitude echoes some of the early 2020 COVID lockdown skeptics, that’s because they’re not entirely dissimilar. Both seem born from a sort of folk libertarianism, more a contrarian personality than a philosophical commitment to liberty. Crawford’s excited quasi-endorsement of an annual motorsports event that predictably results in one or two fatalities brings to mind a rambling May 2020 essay in Front Porch Republic about the culture of safety, in which Catholic writer Michael J. Sauter manages to locate a praiseworthy Christian manliness in a song about a race-car driver who departs the world, and bereaves his girlfriend, in a fiery crash.

These types of arguments, if they can be called arguments, are usually made by people who would never actually engage in the behaviors they rhapsodize. At least Crawford, whether splitting lanes in his motorcycle, getting up close to a high-speed off-road race in the Las Vegas desert, or wheedling his way out of his latest speeding ticket in a Virginia courthouse, is willing to put some skin in the game.

But the deeper problem—the problem that this folk libertarianism is congenitally incapable of seeing, much less addressing—is that getting from A to B should not require one to put skin in the game. Crossing the street, or driving it, should not entail a meditation on one’s mortality. Crawford does something that right-leaning intellectuals do often, and almost never notice. They find justifications for hardship or risk, and praise the character that can face them, without distinguishing between natural or inherent risks and manmade ones. They treat policy failures, or problems easily remediated by policy, as opportunities to build character. They betray a touch of self-loathing masquerading as self-reliance. They implicitly view solving problems through policy as cheating one’s way through a life that is supposed to be difficult.

Ultimately, Crawford succeeds in an abstract appreciation of the car as a tool and invention, and of driving and engineering as skills worthy of honing. But he remains essentially clueless about the much larger political and social dimension of the automobile, the overwhelming physical and legal infrastructure that entrenches it, and the not-insubstantial portion of the country that it leaves in the dust.

Crawford’s “second” book, a warning against the self-driving car, is a success. It comes as a shorter set of chapters towards the end, but his treatment of the nexus of big tech and driving, as well as earlier discussion of folk mechanics, junkyards, and zoning, are excellent.

Junkyards, he incisively notes, undermine the logic of obsolescence. Zoning laws and other land-use ordinances, based on either visual nuisance or the banning of home-based businesses, often prohibit homeowners from storing parts and junked vehicles on their own properties. Commercial junkyards are also restricted based on zoning (as are all industrial land uses). He writes that old cars “enact a moral sensibility of stewardship, an outlook that values continuity.” This outlook, of course, is the enemy of mass merchandising. Crawford’s suspicion that there might be some through-line from Detroit’s planned obsolescence to the difficulty of repairing or working on cars today, is the kind of positive insight that small–l libertarianism can yield.

The broad point in this section is that the “totalizing” logic of automation, and the wholesale transformation of transportation, is ultimately a political issue, to be decided by democratic deliberation, not by tech corporations. He correctly observes that the success of self-driving cars hinges on the “wholesale reworking of the urban landscape according to the dictates of a handful of private enterprises and their fellow dreamers in the public sector.” Huh.

Perhaps, if he were writing in the 1910s, Crawford would have penned a heartfelt denunciation of the then-burgeoning horseless carriage industry, its slow takeover of public streets for this new mechanical conveyance, and its looming potential to shatter the physical forms of the traditional city. That would be an interesting book, too.