Gazing Into the Abyss with Charles Taylor 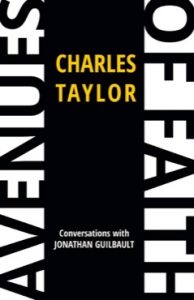 I love short books. I love long books too; completing War and Peace a few years back still stands as a singular personal achievement. But there is something deeply satisfying about short books. Perhaps it is just my twenty-first century attention span. Whatever the reason, I love being able to pick up a book, and maybe, just maybe, not set it down again until it has been read cover to cover. And so it is with deep enthusiasm that I commend to you Charles Taylor’s Avenues of Faith: Conversations with Jonathan Guilbault, a compact work recently published by Baylor University Press. The book is brilliant for its simplicity: ask perhaps the most distinguished living Catholic philosopher to choose and discuss five books that have shaped his faith, and then engage him in dialogue about those books. For those who want an introduction to Taylor’s expansive thought, but are not quite ready to launch into his 900-page magnus opus, A Secular Age, this new book is an excellent primer.

The five books that Taylor chose to discuss are characteristically diverse: Maurice Merleau-Ponty’s Phenomenology of Perception; Friedrich Hölderlin’s Poems; Charles Baudelaire’s The Flowers of Evil; Fyodor Dostoevsky’s The Brothers Karamazov; and Brother Emile’s Faithful to the Future: Listening to Yves Congar. What shimmers most clearly in these conversations is the mystery that is at the heart of faith.

One might perhaps expect someone of Taylor’s philosophical training and pedigree to offer a systematic, reasoned approach to the Christian faith. But one will not find that here. While Taylor clearly sees faith as reasonable, he understands that the person of faith must step far beyond the known, into the abyss, into a place of uncertainty, a place of mystery. It is only by moving beyond systematic thought and pure reason that one can behold the face that holds the world together. As Guilbault writes in his introduction: “no equation and no formula will ever fully reflect the shimmering of meaning emanating from a spoken word that dares to appear ‘behind the looking glass’ … beyond the apparent abyss of death lies resurrection.”

Two of Taylor’s discussions stand out for me regarding this gazing behind the looking glass. First—and not surprisingly, given my propensity to be a literary Russophile—The Brothers Karamazov. In discussing Dostoevsky, Taylor picks up where he left off in his conversations about Hölderlin and Baudelaire, with Romanticism. Taylor argues that Dostoevsky’s first influence was liberal Romanticism, but after facing the trauma of a firing squad and Siberian imprisonment, he came to give his Christian faith more and more space. Yet, like the Romantics, he always maintained a distance from the pervading influence of the rationalism of his time. For Dostoevsky, “Christ would always move and convince him more than what human reason deems true.” In some way, this attitude put him in opposition to the relationship to truth adopted by many contemporary Catholics, “namely, Christ, as he appears in the formulas of the magisterium and of Scholastic theologians.”

In contrast, for Dostoevsky, “the truth of Christ escapes any definition.” Thus, in The Brothers Karamazov, when Ivan exposes his views to his younger, saintly brother Alyosha, that if God exists, he cannot be good and loving, Alyosha disagrees wholeheartedly, yet his “faith in Christ doesn’t provide him with decisive answers in the field of such argumentation. His faith is not irrational, but it rests more on trust and a divine call than on reasoning.” What ultimately is Dostoevsky’s answer to Ivan’s nihilistic, rationalistic rejection of faith? Not a counterargument, but a life. A witness. Namely, the saintly witness Alyosha: “For Dostoevsky, the answer to the question about the meaning of existence consists in gestures that enable or reinforce communion. Actually, it’s Alyosha’s entire life that answers his brother Ivan.” As the world continues to “disenchant itself,” as Taylor notes here and portrays at length in A Secular Age, perhaps the most convincing, the most important model of faith is Christian witness. Not argument, but holiness.

Guilbault makes this same point in his introduction, quoting Pope Paul VI’s apostolic exhortation Evangelii nuntiandi: “modern man listens more gladly to witnesses than to masters … or if he listens to masters, it is because they are witnesses.” Now almost fifty years after that statement was made, its truth seems even more abundantly clear. Even more reason to be grateful for Taylor’s own witness of faith; for his willingness to go beyond pure reason and to invite his readers to gaze with him at the One perpetually gazing back.

The second conversation that stood out for me was Taylor’s discussion of Brother Emile’s Faithful to the Future: Listening to Yves Congar. Brother Emile is a member of an ecumenical French Christian monastic fraternity called Taizé Community. Yves Congar was a French priest and later Cardinal who was instrumental in the inspiration and preparation for Vatican II, but only after having been nearly silenced by the Church for his engagement with modernity. Once again, Taylor notes the potential danger of “systems” and “universal rules,” for which Congar was also critical:

Rationality, regardless of how one looks at it, is a matter of universal rules. And every time one tries to apply so-called universal rules, a lack of sensitivity arises, or even a lack of humanity. Indeed, the rules of reason leave out the concrete, particular aspect of things, each person’s unique experience. All systems run the risk of crushing lives, of manifesting themselves through injustices. Thus, to avoid this type of drifting, there has to be an organ of self-criticism. It’s true that reason provides secular tools for self-criticism. But, in my eyes, there’s an inherent blindness in the use of pure rationality. To make its usage really efficient, meaning really human, reason must agree to come out of itself and to rely on unprovable intuitions.

Rather than merely looking to the past to determine the “formulas” or “recipes” for faith, Congar, and in turn Taylor, advocate an openness to the working of the Holy Spirit in every age. The gospel has not, and will not, be exhausted prior to the parousia. Engagement with the broader culture and openness to new ways of seeing and living in faith are crucial, since “no society has ever fully embodied the gospel, and none ever will.” Which is not to say that the past should be rejected or forgotten, or that we should have a hostile attitude to norms or practices in past ages that seem barbaric to us now; Taylor advocates for humility and for removing anachronistic glasses when criticizing the past. Instead, like Congar and the other architects of the ressourcement movement, Taylor urges us to go back to the Fathers of the Church and to treat them as models for our own engagement with the world, not treating any system as conclusive or having the final say.

Taylor’s brief book should be an inspiration to artists. For it is the artist who dares to dream that the philosophers, the scientists, the politicians, the capitalists, the Marxists, the technocrats, the bureaucrats, even the theologians, have not spoken the last word. In the face of various leviathans that tend to instrumentalize and dehumanize the individual, the artist takes a different view; sees with an artist’s eyes. Taylor calls this “An artist’s look.” It is the vision the Christian artist—and even more so, the saint—sees when she is “struck by the gospel” and thereafter “granted another way of looking at the world.” The artist can then perceive, and perhaps convey to others, “the gaze that Christ placed upon each person and that reflects how God gazes at us.”

Artists should also take courage from Taylor and be reminded that the canon is not closed. Michelangelo did not paint the last stroke. Beethoven was not the last note played. Just as the ressourcement theologians and Dostoevsky were students of history who mined the past, but who then engaged the world as it was, so too should Christian artists in the twenty-first century approach their art. I am reminded of Randy Boyagoda’s provocative article in First Things in 2013 titled “Faith in Fiction,” in which he begins by writing: “I’m sick of Flannery O’Connor. I’m also sick of Walker Percy, G. K. Chesterton, J. R. R. Tolkien, C. S. Lewis, T. S. Eliot, Gerard Manley Hopkins, and Dostoevsky.” His point? These artists, and most others recognized in the accepted Christian literary canon, are dead. And while they reflect some of the best that our tradition has to offer, they do not have the last word.

Artists are desperately needed in our current world who—inspired by Dante, Chaucer, and Austen; Mozart, Hildegard, and Dvorak; Rembrandt, van Gogh, and Grunewald—can engage both tradition and the present age, pointing people’s gaze toward the One who is gazing back at them. I have become increasingly convinced that in our age, it is the artist—and of course even more so the saint—who has been called to lift us out of our boredom, fear, insecurity, malaise, and the domination of political thinking, so that we might experience “the gaze that Christ placed upon each person and that reflects how God gazes at us.”

All that from a little ninety-two-page book! I told you I love short books.

Jeffrey Wald writes from the Twin Cities. His writing has appeared in publications such as Dappled Things, Genealogies of Modernity, and The Front Porch Republic.