Geopolitics in a Godless Age 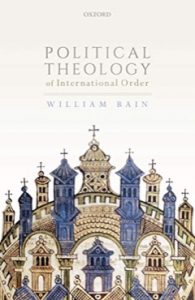 Few academic fields today feel more unabashedly secular than international relations. Traditionally, the major division in the field broke down into whether practitioners viewed the world as a landscape of competing powers (the realist school), or as an amalgam of societies capable of cooperating towards common humanitarian ends (the liberal school). While this paradigm has changed somewhat with the rise of constructivism, religion—to the extent it enters the geopolitical calculus at all—is still often framed as merely one driver of conflict alongside others. And for their parts, very few theologians choose to engage the discipline on anything other than a superficial level.

While not himself a theologian, William Bain—professor of international relations at the National University of Singapore—undertakes such an engagement in Political Theology of International Order, a thoroughgoing “theological genealogy” of the metaphysical assumptions that underlie contemporary IR theory. To its tremendous credit, Bain’s study is a book that—almost alone among others in its field—does proper justice to theology’s own self-understanding: theology is not one discipline alongside others, but instead constitutes the plausibility structure of value and order underpinning everything else. (Unsurprisingly, the work is heavily indebted to the Radical Orthodoxy school of thought, though Bain’s own commitments remain opaque throughout the volume.)

For Bain, both the rhetoric and practice of international relations disclose the existence of two potential “higher-order” conceptions of IR theory: immanent order and imposed order. Immanent order leans toward viewing geopolitical arrangements as governed by universal and necessary laws that persist for all time; in theory, the pattern or proper order of relations between political entities is discoverable by human beings. Imposed order, by contrast, conceives of international relations as composed of contingent, ad hoc arrangements that flicker in and out of existence over time.

Bain traces the intellectual roots of this dichotomy all the way back to a transition, within medieval theology, from metaphysical realism to nominalism. The realist view, under the influence of Greek philosophy, posited reality as a unified and hierarchical continuum of being. On this view, all things have individual “natures” or “essences” common to their kind, a correct understanding of which allows for their good to be attained within a seamless whole. For the metaphysical realist, God’s rationality was the divine attribute emphasized most strongly.

The nominalist view, for its part, emerged out of a theological concern to preserve the freedom of God to “act other than he did.” Famously, William of Ockham argued for a world comprised of individual existents, rather than a cosmos of finite realities participating in higher universals. God, in turn—whose primary attribute was his divine will—then imposed a particular pattern of relations upon those existents. On this view, no particular pattern of relations could be assumed to be necessarily valid for all time solely on the basis of observation; God might potentially intervene to set things otherwise. Broadly excluded from this picture was the possibility of any common good, comprehensible through reason, in which all things might participate in order to attain their true harmony.

With this distinction in view, Bain moves to consider Hugo Grotius and Thomas Hobbes as exemplars of these two dueling views of international order. Historically speaking, the fight was definitively resolved in favor of Hobbes, given that all of today’s dominant IR paradigms embed the nominalistic assumptions of an “imposed order” framework. Realist understandings of the “balance of power” conceive of nation-state relations as primarily a landscape of unreconciled difference, devoid of a common good to which rival regimes might both credibly appeal. So too, liberal and constructivist understandings of “international society” treat nation-states as individual constituents that come together to form a greater whole, rather than as diffuse expressions of a single universal good (which would be the metaphysical inverse of a “society” assembled by independent actors).

But intriguingly, Bain observes, nation-states navigating a world of imposed order continue to cloak their actions in language consistent with an idea of immanent order. For example, when NATO characterized its 1999 intervention in Kosovo as “illegal but legitimate,” what was this but an appeal to some standard or other of higher good? And yet, in the end, the intervention was a calculated exercise of power nonetheless. Such performative discursive moves, Bain suggests, mask the harsh reality of the fact that there is no agreed-upon foundation for the dominant grammar of human rights. In a global environment where the existence of God is a subject of contestation, to what unchanging reality can consensus-seekers plausibly appeal? It would seem that it’s power politics all the way down.

Though the book ultimately reaches a place similar to where many observers of contemporary “human rights” discourse—such as Samuel Moyn—have landed, Bain’s volume is an original and compelling exploration of a complex subject. As a quasi-postmodern study that uncovers and examines the metaphysical commitments underpinning the ostensibly “secular” discipline of IR, it is an unqualified success.

At times, however, certain theological nuances don’t quite get the development they warrant. Particularly problematic is Bain’s conflation of “immanent order” with a philosophical necessitarianism that many staunch Christian metaphysical realists would reject. Bain’s understanding of “immanent order” is an implicitly “pagan” one—suggesting, most notably, an understanding of divine creation that tends in the direction of unreconstructed Neoplatonic emanationism, in which the divine principle could not have done other than it did under any circumstances. The understanding of natural law that follows from this, in turn, places much more weight on “natural” hierarchies—such as Plato’s conception of gold, silver, and bronze souls, or Aristotle’s idea of “natural slaves”—than on realities like the conditions of rational action as such, a topic stressed by latter-day Aristotelians such as Henry Veatch and Alasdair MacIntyre.

Étienne Gilson has argued at length that the distinctively Christian metaphysical breakthrough occurred when Greek thought encountered the Jewish theological claim that God’s proper name was I AM. This laid the groundwork for an existential metaphysics of God as not merely some supreme determinate substance, but as the Pure Act that allows beings to be. In David Bentley Hart’s words, Christian theology “recovers all of philosophy’s most enchanting prospects upon being … by detaching them from the morbid mythology of ‘grounds’; and by resituating them within the space that the analogy between divine and worldly being opens up, setting worldly being free peacefully and preserving it beautifully.” Since God is not a maximal being among other beings, God and the world are always related to each other as giver and gift. And the contingency and freedom of finite existence are thereby essential characteristics of any Christian metaphysics—not simply a “nominalist” one.

This difficulty is pervasive throughout Political Theology of International Order. For example, Bain characterizes nominalism as committed to a “radically contingent world, composed of isolated things, which God willed into existence without any necessary reason.” But no less a realist luminary than Thomas Aquinas wrote that “in no way at all is the present course of events produced by God from any necessity, so that other things could not happen.” Indeed, according to Aquinas, “although no other order would be suitable and good to the things which now are, yet God can do other things and impose upon them another order.” Substantively, this is not much different than the claim that, as an old Lutheran hymn put it, “what God ordains is always good.”

Unsurprisingly, it is Martin Luther himself—or at least Heiko Oberman’s reading of him as nominalist par excellence—whom Bain presents as the architect of the nominalist breakthrough. But again, the theological picture is more complicated than that. Bain does not engage in depth with any members of the “Finnish School” of Luther research, which has called many of Oberman’s construals into question; particularly challenging for Bain’s thesis is Sammeli Juntunen’s argument that “Ockhamist ontology … could not make a total breakthrough in all areas of theology” and that Luther’s teachers “could imply the concept of [ontological participation] in a way that was contrary to Ockham’s basic intentions.” The theological lines here are very blurry, and the purported realist/nominalist divide within Christian theology may not quite do the analytical work Bain desires.

To be sure, even if some of the underpinnings of Bain’s argument are rickety, there are clear similarities between the nominalist rejection of classical metaphysics and the emergence of what John Milbank terms the “ontology of violence” in the geopolitical sphere. Put simply, contemporary IR theory has little room for what Bain terms “the idea of a transcendent universal good that exists in every subjective part of a whole.” Conversely, on a classically Christian metaphysical account, the agonistic character of international relations is never absolute: as Milbank phrases it, God is “the reality which includes and encompasses in his comprehensio every difference.” Whether this Christian metaphysical view is really inconsistent with the concept of “imposed order,” though, is less clear. Perhaps this side of the eschaton, a Christian theory of international relations might look like an “imposed order” that nonetheless (and perhaps paradoxically) cognizes a common good, and whose constituent members are analogically related to their ontological source while still pursuing divergent patterns of interaction over time.

At any rate, one might reasonably suggest that for the Christian metaphysician, from a God’s-eye view “immanent order” (understood as divine rationality) and “imposed order” (understood as divine freedom) are non-distinct: God always freely ordains that which is in accordance with his divine reason. That is, after all, what follows from affirming the thoroughly existential, metaphysically simple God of Gilson, Hart, Milbank, Aquinas, and Luther.

Theological ambiguities aside, Political Theology of International Order is a must-read for intellectual historians of modernity, as well as for those interested in the deep intersections of religion and international affairs. International relations, like so many other disciplines, is freighted with unconsciously theological assumptions—which, all too often, find themselves nested within paradigms claiming to describe an entirely secular world. Bain’s book commendably denies his readers, once and for all, the comfort of that ignorance.

John Ehrett (J.D., Yale; M.A.R., Institute of Lutheran Theology) is editor-in-chief of Conciliar Post. His writing has appeared in American Affairs, Public Discourse, and the Claremont Review of Books, among other venues.