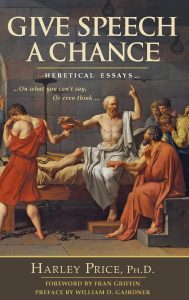 After reading about Gnosticism, which is Greek for Know-it-all-ism, for years, all I could conclude was that I really did not know what it was at its kernel. I only found analyses of multitudinous manifestations of this philosophy over the centuries—from the ancient Zoroaster, to the Cathars in the Middle Ages, to the Rosicrucians and Freemasons in our own times—and far from making me a know-it-all, this study left me simply confused.

Hence my gratitude to Give Speech a Chance. For though author Harley Price does not offer a definition of Gnosticism himself, he does suggest one:

I am hardly the first to notice that progressivism is not so much an ideology as an attitude. Like Gnosticism, it has never been incumbent upon its adherents to demonstrate, either rationally or empirically, that they are right, but merely to know that they are in possession of the secret saving knowledge, and to pity the uninitiated multitudes who are not.

This gave me the key to unlocking at last this mysterious philosophy. Gnosticism is the conviction that one has the truth because one so strongly feels it internally that external facts do not matter and cannot change the person’s mind. Only a stronger emotional impact can.

This is why Price cites P. J. O’Rourke: “Conservatives believe in God. Liberals believe in Santa Claus,” and then himself concludes that “conservatives are from Venus and liberals from Mars.” In both cases, the former want to reason from facts, the latter want to impose from emotion. As difficult as it is for the twain to meet, Give Speech a Chance offers the opportunity.

This stirring book is really Give Reason a Chance. As a Canadian, Price points out to Americans how we are heading toward some of the more decadent situations of his country, although he mostly observes the United States from an objective distance. What does he see? Violent mobs, the mainstream media, and a large portion of government in the grips of what the reader can identify as the Seven Capital Sins—especially envy, anger, sloth, greed and lust—to the point of being psychopathically suicidal. He shows how the Left’s driving principle is that the end justifies the means, and the end is the obliteration of Western Civilization without knowing what to put in its place. Price equips us to see through the euphemisms of the mainstream media to realize that liberals are urging us to dismantle all we hold dear.

Price does this in such an entertaining and often humorous way that one wants to keep on reading. In short, one can view this book as a thorough and enjoyable discourse on the Gnosticism of our current leftists. It is to be hoped that the humor of this work can penetrate the feelings and thus open the minds of at least some self-identified liberals, progressives, democratic socialists, and out-and-out Marxists.

Liberals, Price notes, are convinced that everyone who matters agrees with them. This handily provides them with an occasion for class warfare against those millions of ignoramuses who are devoid of that inner conviction that can overcome facts. This ignorant horde must be forced to comply with the correct position on every issue, be it climate change, abortion, transgendered bathrooms, wealth and poverty programs, or systemic racism. Thus university professors are officially reprimanded for not using the newfangled, ungrammatical pronouns, and workers are sentenced to racial or gender sensitivity training. In brief, liberals do not want to win the argument, they want to criminalize it. Price reports that all this makes a former Soviet citizen acquaintance of his feel nostalgic. Indeed, in a recent address, the Russian President Vladimir Putin enumerated a similar list of Western deviances, noting that Russia had tried them under Communism, had found them to be a disaster, and 30 years later is still trying to heal the wounds.

Price seeks to penetrate the strong feelings of liberals by drawing leftist positions to their ultimate conclusions, which turn out to be absurd and often funny—the very definition of ridiculous. Whereas liberals eschew traditions because this creates the chaos that, according to their inner conviction, will result in a “better” world (even though they do not know what it will look like), conservatives want to preserve traditions because facts show that they continue to work even after centuries. For example, today’s makers of fine cabinets join pieces of wood using dovetail joints because these work and have done so for generations; a better way to put together high quality furniture has not been found. Jettisoning dovetail joints just because it is traditional is irrational.

As Price points out, liberals reject the age-old morals that come to us from Socrates, Plato, Aristotle, the Bible, Boethius, Augustine, Aquinas, Pico della Mirandola, Thomas More, Erasmus, John Milton and Alexander Pope. Many of our uneducated graduates of progressive colleges may never have heard of these sages, much less read them. No matter, they have been taught that these are white male patriarchal oppressors. Their norms once served as glue binding societies together for millennia. Hence it makes sense that liberals would want to destroy these norms precisely because it is chaos they seek. Consequently, in time, liberals become libertines.

Liberty-loving citizens have over generations progressively surrendered their autonomy to the state in return for the gradual legalization of sexual deviations, such as easy divorce, provocative sex education, universally accessible contraception and abortion, same-sex marriage, and rights for persons who deem themselves transgendered. The thus benumbed citizenry has supinely allowed the government to tighten its grasp on areas to which Americans used to apply their own resourcefulness and initiative, namely: business, trade, education, child care, health care, elder care, science, and the arts. A critical mass has been brainwashed into presuming that the bigger the government, the better off we will be, even though historical facts reveal the opposite. In vain did President Reagan warn us, “Government is not the solution to our problem, government is the problem.” On the contrary, many people expect the government to iron out any difficulty, as though the people who compose the government are exempt from Original Sin.

The true revolutionary and savior was Jesus Christ. His greatest threat to the state was that, unlike revolutionaries before or since, he nobly ignored it, pointing out that “the Kingdom of God is within you.” While Jesus demands virtue in each individual, he says not a word about collective rights or entitlements. Yet it is Christians who cannot mention Jesus as the source of their ideals because liberals claim the Nazarene’s apolitical message violates the separation of Church and State. If Christians dare to do so, they are denounced as backward rubes who “cling to their guns or religion,” to quote the former Senator Obama. In practice, religious freedom means hardly anyone can mention it.

When there are non-religious reasons for opposing a liberal idea, such as abortion, they are discounted if some religion teaches the same. This is merely a rhetorical ploy to avoid dealing with the ethical argument. Where in the Constitution is it forbidden to apply correct ideas? The approximate straightness of a wooden ruler must be judged by the mental notion of a straight line; experience shows that rulers of nations are generally more crooked than rulers of wood. Liberals want “religious freedom” to mean freedom from religion so that legislators and citizens are increasingly free to file suit against public expressions of Christianity. A Christian baker is penalized by the court for refusing to bake a cake for a homosexual wedding despite the fact that there were nearby bakeries that would. No court has yet dared to sentence a Muslim baker—this would be decried as racist. In effect, the State now has an Established Religion that imposes errant sexual beliefs upon biblical believers under pain of heresy and excommunication.

This is especially true of abortion. If there is any issue over which conservatives can never find common ground with liberals, it is this. Progressives want conservatives to compromise. At what point can a conservative logically say that the conceptus that is human in its origin, human but distinct from the mother in its DNA, and human in its destiny, is not human? On the other hand, the huge push to make unlimited abortion available shows that pro-abortionists are not willing to compromise on anything. Over twenty-five million babies aborted yearly worldwide.

The progressive liberals are driven by their Gnosticism to destroy traditional morality and to impose their newly Established Religion upon everyone else in the name of freedom from oppression for the sake of racial, sexual and economic equality. The government, of course, will pay for the programs necessary to achieve these ends. The trouble with this, as Margaret Thatcher once said, is that eventually the government will run out of other people’s money.

Admittedly this is a serious review. I have purposely omitted Price’s many humorous comments and comparisons so as not to spoil much of the fun in reading this book. It will not only entertain, it will sensitize the reader to the anti-factual, gnostic fallacies in which our society is awash.

Rev. Bartholomew de la Torre, O.P. is a Dominican friar currently serving as a missionary in Mexicali, Mexico. He is the author of Thomas Buckingham and the Contingency of Futures: The Possibility of Human Freedom.