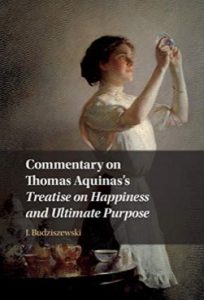 St. Thomas Aquinas has been one of the principal intellectual mainstays of post-World War II American conservatives, at least until the movement’s more recent radical forays into populism and nationalism. With mid-twentieth century thinkers such as Jacques Maritain, Yves R. Simon, and the later work of neoconservative (Catholic) thinkers such as George Weigel and Robert George, some form of (perhaps even radically modified) Thomism has served as the basis for conservative arguments against abortion, for just war, or in support of the death penalty.

However, while many conservatives have been drawn to the work of Aquinas, one of the principal obstacles to reading the Universal Doctor of the Catholic Church has been Aquinas’s seemingly difficult argumentative method and writing style.

Happily, in his recent work, University of Texas philosophy professor J. Budziszewski has provided one of the most thorough and rich English-language introductions to the work of St. Thomas Aquinas of those available not only in recent years, but perhaps ever. A well-seasoned educator, Budziszewski recognizes that many young people today are caught in the “tyranny of the now” and will be repulsed not only by St. Thomas’s Christianity, but even the use of reason and logic in the Angelic Doctor’s arguments. However, for those willing to listen, there is a treasure of wisdom in Budziszewski’s commentary.

The most recent in a series of commentaries on St. Thomas’s treatises on which Professor Budziszewski has been working, the current commentary focuses on St. Thomas’s Treatise on Happiness or Questions 1–21 of the First Part of the Second Part of St. Thomas’s Summa Theologiae, his great theological textbook of the thirteenth century in which the Angelic Doctor lays out a blueprint of what truly does and does not make humans happy. In Budziszewski’s edition, Aquinas’s text is accompanied by a line by line summary or “simplification” as well as an analysis, and a series of “discussion questions” that treat related topics.

In his introduction, Budziszewski states that his edition of Aquinas’s text is especially fitting for the post-millennial era because the current spike in malaise has rendered a precipitous drop in the global “happiness index.” While the 1990s promised the end of history and a future of prosperity, the twentieth-first century, which unofficially began on September 11, 2001, has been marked not by peace and prosperity so much as by wars, social chaos, and pandemics. Moreover, all of this is undergirded by the sense of fraud and unreality in the world of late postmodernity, which has eradicated the stability and security of the previous “American Century.” The malaise has become so bad, Budziszewski points out, that even some recent philosophers such as David Benatar have argued that it would be better for humans to never have been.

As a result, Budziszewski has decided to re-introduce one of the most important premodern discussions of human happiness, that by St. Thomas Aquinas. Budziszewski notes that Aquinas’s differs from contemporary works on happiness precisely because his is a theoretical analysis of happiness as opposed to a statistical analysis. Aquinas’s method throughout the work is to draw from the best of what has been said before him, taking note of classical and Christian as well as medieval Islamic and Jewish works of philosophy. As Budziszewski argues, St. Thomas Aquinas is not a fideist who rejects reason and science for faith.

At the center of Aquinas’s argument is his belief that happiness here on earth is only temporary and limited. True happiness, St. Thomas argues, is available in the afterlife. Humans furthermore cannot reach happiness on their own. This happiness in the afterlife cannot be lost, while, of course, the temporary and limited happiness of the world can be. In perhaps a shock to contemporary readers—even some Catholic ones—Aquinas additionally argues that there will be degrees of happiness in heaven based upon the merit of those who make it to their celestial reward.

God is our creator and we owe Him undivided and total love. God is also the greatest good, and only in God will the human heart be satisfied. Aquinas is, like Aristotle, the philosopher par excellence of common sense. He recognizes that money, honor, friends, and what Aristotle calls “goods of the body” are, in fact, true goods. However, they do not make us happy. All of these contingent goods ultimately suggest a far greater good as their source. Happiness, for Aquinas, is only found in a visio Dei or vision of God in his essence.

Aquinas’s treatise is ultimately rooted in the notion that humans are rational creatures made in the image and likeness of God and thus endowed with free will. Humans have the ability, in a certain sense, to choose their destiny. Humans are both contingent, that is, fragile beings dependent on God for existence and Providential guidance; however, we also have the power of choice, and are on a quest or search for happiness. Happiness is something uniquely human and is something more like “flourishing” as opposed to pleasure. Humans have the choice, not only to act, but to choose what they do and how they do it. Aquinas’s understanding of free will stands in stark contrast to certain forms of biological determinism and psychology held by such thinkers as Michael Ruse and E. O. Wilson that tries to eliminate human free choice.

In the end, J. Budziszewksi’s Commentary is an immensely rich and encyclopedic explanation of not only The Treatise on Happiness, but of St. Thomas’s work generally. The notes and discussion as well as the line by line translation or “simplification” of Thomas’s work are extremely helpful. It must be emphasized that most of the book consists of Budziszewski’s own painstaking commentary, examples, and simplification, as well as clarification of Aquinas’s thought. The work is highly readable and it is strongly recommended.

Jesse Russell has written for publications such as Catholic World Report, The Claremont Review of Books Digital, and Front Porch Republic.