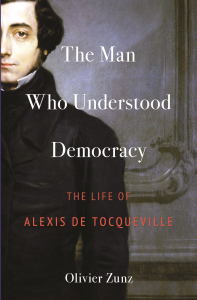 In years since Alexis de Tocqueville’s death in 1859, his popularity has ebbed and flowed according to the politics of the two countries he cared for most: his beloved France and his second home America, where he claimed a metaphorical citizenship, describing himself as “Half-Yankee.” In his masterpiece Democracy in America, published in two volumes (1835 and 1840) after a nine-month voyage through the United States with his friend and lifelong collaborator, Gustave de Beaumont, Tocqueville pondered the relationship between history and politics. While historians in democratic times are “right to allow a large part [of what happens in democratic societies] to general causes…they are wrong to deny the particular action of individuals entirely because it is not easy to find and follow it.” Politics is not predetermined; human liberty also shapes the course of history. Tocqueville concludes, “One must guard against obscuring this idea [of human liberty in history] for it is a question of elevating souls and not completing their prostration.”

How should a historian, then, write a life of the great Tocqueville? Olivier Zunz took on the challenge in his new and immensely rewarding The Man who Understood Democracy: The Life of Alexis de Tocqueville. A scholar of American history and translator of Tocqueville, Zunz gives a clue to his approach in the epigraph addressed to Michel de Certeau, the French Jesuit philosopher and historian “who taught me that ‘l’histoire n’est jamais sure.’” Not only should the historian be wary not to eliminate human liberty in history, but he should recognize the past is always strange and never completely settled.

This serves as sufficient justification for a new Tocqueville biography. Two other prominent biographies currently exist, distinct from books exclusively on Tocqueville’s journey, such as George Wilson Pierson’s Tocqueville in America and Leo Damrosch’s Tocqueville’s Discovery of America. Tocqueville by André Jardin (1988) and Alexis de Tocqueville by Hugh Brogan (2008) each outstrip The Man who Understood Democracy, at 536 and 724 pages respectively, compared to Zunz’s 350. Jardin and Brogan produced masterful works of scholarship. Yet Zunz’s book is a proper rival to them. It is approachable, readable, elegant, and straightforward. It flows beautifully, sacrifices neither nuance nor detail for breadth, style, or shorter length, and is not so long as to try one’s patience. It is fitting for both the academic and the casual, intelligent reader.

Moving from Tocqueville’s childhood in Normandy, where he was born in 1804 to aristocratic parents personally scarred by the French Revolution, through his boyhood and legal training in Paris, his adventurous voyage to the United States, and his subsequent decades of writing interspersed with political activity, Zunz allows Tocqueville’s convictions and their “force” to “drive this biography.” Emphasizing Tocqueville’s “deepest belief” in democracy as a “powerful, yet demanding, political form,” the work meditates both on the substance of his political thought and the context in which he developed and elaborated it. Tocqueville embraced several key principles from which all else flowed: the providential march of democracy, the importance of political liberty, the necessity and good of religion (specifically Christianity), the need to educate the democratic social state, and the open-endedness of human affairs (in contrast to historical determinism). He considered all sides of a question, sometimes hedging his own conclusions to concede adequately the opposite view. The ambiguities of his thought can, Zunz reminds us, make him frustrating to read if we expect a thinker of his stature to have systematically eliminated every tension or doubt. However, Tocqueville’s charm lies in the both…and. His is a style that wins readers by wooing and describing, rather than by perfectly articulating its logic and defining terms.

Tocqueville’s contexts sometimes were the contemplative quiet of his libraries and studies in Normandy or Paris, where young Americans assisted his research. At other times, these contexts were political and polemical speeches or epistolary correspondence with formal acquaintances and lifelong friends. Sometimes he wrote from the wilderness of America (he nearly died when a boat sank on the Mississippi!), the Algerian desert, or the poverty of urban Ireland. It is a shame that only recently have these speeches, letters, reports, memoirs, and other documents come to prominence. (Tocqueville comes alive in his letters to his friends, whatever his shy and melancholy reputation). We get much closer to the whole Tocqueville thanks to these non-canonical texts. Zunz makes extensive use of them and thus takes care to highlight the ebb and flow of thought and action in Tocqueville’s life. It is worth stressing that his biography is worth telling because it is exciting. It blends the active life with the contemplative. The “new political science” Tocqueville crafted for a “world altogether new,” which John Stuart Mill noted was “the first analytical inquiry into the influence of democracy,” was the result of a voyage, not arm-chair philosophy. Simultaneously, the ups and downs of his political career demonstrate the gap between philosophy and politics. Making the sausage, as Bismarck put it, is different from theorizing it.

Zunz also took care to mix the more famous incidents of Tocqueville’s life with more mundane and underappreciated—but revelatory—moments. In the last weeks of his life, Tocqueville, sick with tuberculosis, received a copy of Mill’s On Liberty. Tocqueville wrote to thank Mill the next day, praising in a conciliatory tone their joint efforts on the “field of liberty,” and inquired whether he correctly heard that Harriet Taylor Mill had been doing poorly. “Had Tocqueville the energy to open On Liberty, he would have seen Mill’s moving dedication to his deceased wife.” Clearly, Tocqueville never read the book. A not insignificant part of Tocqueville’s legacy is the articulation of the “tyranny of the majority,” which Mill borrowed in On Liberty. Would Tocqueville have approved of Mill’s use of the concept? Though friendly in the 1830s and early 1840s, they later had notable disagreements that significantly cooled their relationship. Would they have stayed on the same “field of liberty” had Tocqueville lived? Zunz offers students of history and politics much food for thought in this small, very human detail.

A further example is Zunz’s last chapter “Catholicity and Liberty.” An extensive literature exists trying to pin down Tocqueville’s religious convictions. Catholic Harvard Law Professor Mary Anne Glendon took issue with prior biographers Jardin and Brogan, commenting, “It does not seem to have occurred to either biographer that struggle with doubt is a normal feature of Christian life.” Zunz wades into the debate with sensitivity. Tocqueville aimed to reconcile liberty and religion in France, as he thought had been done in America. But whatever his misgivings about their compatibility in France, in his last years he nevertheless tried for a kind of personal reconciliation with Catholicism. Zunz details how this played out in Tocqueville’s last sickly months in Cannes. The Bishop of Orleans celebrated Mass privately in his bedroom; three Sisters of Mercy cared for him; and he received confession, Communion, and last rites before dying on April 16, 1859. Zunz depicts this neither as a dramatic deathbed conversion, nor a superficial attempt to appease his Catholic wife. Rather, “[i]n the last week of his life, Tocqueville gave strong signals that he wanted to depart this world as a Catholic. They were consistent with the many attempts he had made over the years to recover the faith he had known in youth.”

Did this great defender of political liberty, who semi-autobiographically wrote in Democracy that a man’s lack of faith was a violent accident, finally accept Catholicism? His friend Beaumont thought not; many scholars today agree with him. The disputes began almost immediately, for Tocqueville, in France as in America, is a potent symbol. Thus, when Zunz concludes, “Whether Tocqueville had a full reconciliation with his Catholic faith need not be resolved. But there is no reason to doubt, at least, the sincerity of a gesture so completely consistent with his aspirations,” he takes an elegant, nuanced, but minority position that underlines the mysteriousness of the human heart. Of that, Tocqueville would approve.

Tocqueville died so prematurely we must be reminded that his contemporaries were Mill, Marx, Brownson, and Newman. Zunz acknowledges this, and thus the Epilogue considers what Tocqueville did and did not live to see. He concludes that Tocqueville “understood America so well that his work has helped Americans make sense of their democratic experiment,” which underscores that it was a lifelong struggle of Tocqueville’s to make democracy good. The example of that struggle may help Americans make sense of how we do the same now. Do today’s challenges require a “new political science”? It depends on whether we live in the same “world altogether new” as Tocqueville observed. If, however, conditions have changed, Tocqueville would urge us to follow him not necessarily by hewing carefully to his prescriptions (though that may, in fact, be wise) but by thinking with him, learning creatively from his life, and remembering that history is never predetermined, never written in advance. Zunz’s biography helps us to do just that.

Sarah Gustafson is a PhD candidate in Government (Political Theory) at Harvard University, where she studies the thought of Alexis de Tocqueville.