How to Read the News and Stay Happy 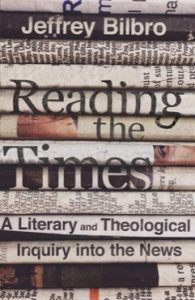 Reading the Times: A Literary and Theological Inquiry into the News
by Jeffrey Bilbro.
InterVarsity Press, 2021.
Hardcover, 200 pages, $24.

“We’re going to win so much, you may even get tired of winning,” proclaimed then-presidential candidate Donald Trump in 2016. “And you’ll say, ‘Please, please, it’s too much winning, we can’t take it anymore. Mr. President, it’s too much.’ And I’ll say, ‘No it isn’t, we have to keep winning, we have to win more, we’re going to win more.’ We’re going to win so much.… You’ll be so happy.” I don’t know about you, dear reader, but in 2021, it’s often difficult not to be unhappy. Last year we witnessed a deadly, damaging pandemic and an election marked by vitriol and enmity. In the new year we saw more of the same, with calls for peace and unity undermined by the increased frequency of silencing or targeting of dissidents and deplorables.

The news is the source of much of Americans’ unhappiness. And it’s not just that the media outlets we frequent are reporting on sad stories like international health crises, terrorism, or partisan bickering. It’s the very way that we consume the news, says Front Porch Republic editor-in-chief Jeffrey Bilbro in his new book Reading the Times: A Literary and Theological Inquiry into the News. If that’s the case, we will need a serious paradigmatic shift to restore sanity to our minds, calm to our hearts, and order to our society. Much to his credit, Bilbro’s remedies are as helpful as his diagnosis is insightful.

First, let’s consider the problem. Shortly after Trump’s election, the Washington Post in a melodramatic fit changed its slogan to “democracy dies in darkness.” Yet, says Bilbro, “democracy can also die in hypermedia’s garish light. The celebrity gossip, ephemeral political drama, and quirky distractions that dominate our media don’t serve the common good.” Just as the last four years of Trump brought us nonstop coverage of every “false or misleading statement,” and hundreds of scandals both real and imagined, the left-leaning media will now write ceaseless paeans about “the cool kids” now working in the White House. “The president’s iTunes playlist is about to become breaking news again. So too the vice president’s yoga routine and model of Fitbit,” observes The American Conservative’s Matt Purple.

The media make their money off the endless manufacturing of pseudo-events. Indeed, the very nature of the consumerist industry demands ever more sensational clickbait to seduce us. Bilbro, drawing on the thought of Joseph Pieper and Henry Thoreau, identifies several consequences from this. It fosters a sense of boredom, renders us more exploitable to advertisers and politicians, and “warps our emotional sensibilities.” Our lives are often defined by endless scrolling and clicking, looking for stimuli to entertain or outrage us.

Bilbro also labels our consumption of media as idolatrous. In what, we should ask, do we live and move and have our being, to cite St. Paul in his speech at the Athenian Areopagus? “If our attention is fixed on the thin stratum of the daily news, then we are guilty of a kind of idolatry, of misdirecting our love and even worship,” notes Bilbro. A thought exercise may shed light on the extent of this disorder. When we first wake up, to what do we turn: prayer and Scripture, or emails, social media feeds, and news headlines? If it is the latter, then the rhythm of our day is immediately defined not by the eternal, but the material and ephemeral.

When bored or exhausted, our temptation is to turn not to the transcendent, but the trivial. Consumer-driven news culture, as many who have succumbed to mindless scrolling or clicking know, fosters a habit of acedia, marked by indifference and listlessness. And yet, paradoxically, consumerism really isn’t attachment to things as much as it is detachment, in that people embrace one trending story, only to quickly dispense with it in favor of something else. Believe All Women, Black Lives Matter, Biden’s inauguration—the stories captivate our attention, only to depart our minds as we become distracted with the next event or controversy.

The above examples point to an even more insidious irony: we indulge in news whose impact on our lives is tangential, if not non-existent, and that we do little to address even when we can. A 2016 Pew Research Center study found that although daily news consumers were very interested in politics, most such people belonged to no organizations, attended no political meetings, and worked absolutely no hours in trying to solve community problems. “The tragedies that play out on our screens can seem more pressing than the ones that happen closer to home,” observes Bilbro. We are intimately familiar with the problems of celebrities and politicians we will never meet, and entirely ignorant of the struggles of neighbors next door.

Bilbro blames the Whig view of history and German philosopher G. W. F. Hegel for contributing to the dehumanizing tendencies in our news. The Whig view of history leads us to view the past as an inexorable story of progress and improvement, and we thus interpret news events as part of the “arc of history.” Hegel, who argued that “reading the morning newspaper is the realist’s morning prayer,” added fuel to the fire by urging us to find our meaning not in transcendent truths but in that progressive clash of thesis and antithesis to form a new and glorious synthesis. One example of this are the incessant media celebrations whenever someone is the “first X to do Y”—one can always find another artificially concocted glass-ceiling to break! We look for meaning in the news because we have been implicitly (and explicitly) instructed to do so.

Such a perspective then leads us to view people as either on the right or wrong side of history, as contributing to that Hegelian conception of progress, or frustrating it. People become less than their individual, dignified selves, but are lumped into simplistic blocs to play a predetermined role—white suburban female, black urban male, evangelical, immigrant, whatever. This reductionism is dehumanizing and socially destructive, evidenced by such risible arguments as claims that nonwhite Trump voters are actually white supremacists. When contemporary news events don’t fit our simplistic binaries, we are emotionally and psychologically shaken, and fall into anxiety, depression, or irrationalism.

Bilbro offers a particularly sobering rejoinder to those daily angered by the headlines in their paper or newsfeed: “We can be more certain that God wills opposition to our preferred causes than that we ourselves are being motivated by God.” Regardless of one’s politics, that analysis is spot on. And if it’s true, what is a sane person to do? “Read not the Times. Read the Eternities,” Thoreau exhorts. By this, Bilbro urges us to develop new patterns of life and thought that make us more impervious to the distraction and emotionalism of the news cycle. We must foster a sancta indifferentia that is “rooted in a confidence that God is in control.”

Bilbro gives many practical suggestions as we “renew our minds,” to quote St. Paul. We should conduct emotional audits, carefully reflecting on whether our pet grievances and passions would be shared by an eternal, transcendent God. We should abandon “an obsessive focus on the metrics of victory,” which drains our energy, produces “mental and emotional dyspepsia,” and distracts us from our more immediate responsibilities. We should consider how we ourselves are complicit in our current distemper, by what we allow into our homes, what we post on social media, and how we communicate with, or fail to communicate with, our neighbors.

We must intentionally facilitate inner and outer silence in our lives, in order to quiet our souls and connect with what is transcendent. Time outside walking, running, gardening, landscaping, fishing, or something else, is essential for this emotional and spiritual recharge. We must resist our modern desire to make even this restorative activity frenetic through iTunes, earphones, stereo systems, and other multimedia. Just turn the stupid things off and consider, if even for thirty minutes, the wonderful and ever-surprising beauty of God’s creation. As prophets and saints have known for millennia, the eternal speaks to us in the quiet of nature.

Bilbro argues against television, following in the footsteps of the great Neil Postman, because it is particularly focused on entertainment. I would go further—television is a far more passive and submissive way to integrate information than reading, in which we have more control over how information is consumed. When we watch a television news program, we are subject to the whims of producers and hosts—if we switch the channel, we are no longer watching the news. Even if we mute the commercials or change the channel, we are to some degree still affected by the distractions emanating from the screen. Contrast that with reading the newspaper. When I sit down to read the paper, I am in control. I can read just the headlines and have some grasp of what is happening in the world; or I can read the first few paragraphs of an article. In twenty minutes with the newspaper, I am far more informed than I would be with an hour of television.

Finally, we must embrace rhythms of life—like Christian liturgies—that keep us from interpreting each day’s news as yet another existential crisis. We must foster intentional, intimate communities that bind us to others in real, vulnerable ways. And we must orient our eyes and ears to media that is true and life-giving—beautiful works of art, great pieces of music, profound works of literature. Doing such things will help us keep the daily news—the consumption of which is required for responsible citizenship in a democratic republic—in its proper existential place. That, ultimately, is the point: discerning how to be well-informed about not only this life, but the next. Pace Trump’s promises, that is a happiness that will last far longer than a presidential term.