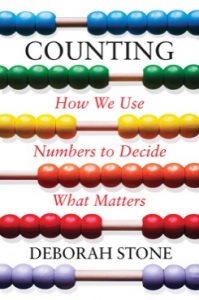 “What, then, is truth?” Nietzsche sneers in his essay “On Truth and Lie in the Extra-Moral Sense.”

A mobile army of metaphors, metonyms, and anthropomorphisms—in short, a sum of human relations, which have been enhanced, transposed, and embellished poetically and rhetorically; and which after long use seem firm, canonical, and obligatory to a people: truths are illusions about which one has forgotten that this is what they are; metaphors which are worn out and without sensuous power; coins which have lost their pictures and now matter only as metal, no longer as coins.

Nietzsche’s terrifying point is that language has no connection to the world it attempts to describe and that the act of categorization that squats at the heart of human thought distorts and falsifies by its very nature. So the “real world” is totally obscured by the merely subjective values we project onto it.

Fortunately for us, our society has figured a way out of the problem: data. Clean of the stench of subjectivity and metaphor, the algorithms that increasingly control our lives can finally show us the way things really are, rather than the way we wish they were. The cargo cult we’ve formed around numbers is part of a larger cult of science that has intermittently reigned over European and American culture since the French Revolution enshrined the goddess Reason in Notre Dame and makes itself felt in banalities like “Science is real” and “Trust the data”—as if abstractions like science and data could be detached from the human beings who produce them.

This is the central premise of Deborah Stone’s Counting: How We Use Numbers to Decide What Matters. That subtitle is a little misleading, however, because Stone asserts, quite rightly, that the decision of what matters takes place, silently and invisibly, before the numbers even appear: “But counting is more than merely attaching number words to a heap of things. Before you can tally up how many ‘somethings’ there are, you have to sort things and decide which ones belong to the group of things you want to count.” In other words, you have to create categories, which we do by taking a mass of objects or ideas or people and ignoring some of their differences in favor of some of their similarities. The problem is that the qualities we ignore and the qualities we take stock of are not given by nature: we make the decision based on assumptions that often go unexamined and almost always go unconfessed.

The supposedly objective and value-neutral numbers and algorithms that control everything from the welfare system to prisoner release to the continued employment of Uber drivers are thus value-laden from the start. And the values involved are those of the corporations and government agencies that order the numbers and the data scientists and computer programmers who so selflessly deliver them. I’m sure I don’t have to point out that many of us don’t share those values and are left helpless when supposedly neutral numbers do things that we find abhorrent.

Stone takes us through several dozen examples of the way data can be cooked, altered, or unconsciously manipulated by the assumptions of the researcher. I have a friend who, when I complain about this or that aspect of modern society, always replies, “Follow the money!” Stone’s maxim might be, “Follow the values!” “The best way I know to find out whether a measure is valid,” she writes, “is to travel back to the moment of creation and nose around.” She doesn’t mention his name, but she is suggesting we perform the Nietzschean maneuver known as genealogy, by which we take a supposed given and show that it has a history and was created by human beings for their own purposes.

Take the much-hated educational policies No Child Left Behind and Race to the Top, for example. Both are modifications of a Soviet-era policy called “pay-for-performance,” by which workers are rewarded when their work meets certain pre-determined “outcomes”—teachers reading this will no doubt wince at the word—and punished when it fails to meet them. It sounds good, but in fact teachers are held totally responsible for students’ scores on standardized tests. But a teacher’s talent and work ethic are only two elements in student performance; how can it be fair to tie their employment to an outcome over which they have limited control? (And that’s assuming that standardized tests are an accurate measurement of student learning. I have my doubts, as does Stone.)

Standardized tests have the veneer of objectivity, of course, which grants them a certain appeal to politicians and their bureaucratic attachés, who often haven’t set foot in a classroom for decades. They also have the advantage of shifting the blame downwards, toward the teachers who are relatively powerless in the educational apparatus. As Stone puts it, “He who sets the numerical targets, measures performance, and doles out the consequences, exercises power. In pay-for-performance, numbers are the weapons of the strong. To the extent that people need income and employment, paying them or firing them according to their numbers pressures them into achieving good numbers as their primary goal.” The unpleasant result is that teachers devote huge amounts of class time to teaching students how to take standardized tests and, in extreme cases, alter the test results. In this way, numerical measures that seem objective and commonsensical threaten to undermine genuine education, the fruits of which often cannot be easily quantified.

Stone’s solution to these problems is quite reasonable: we need not discard numbers as an evaluative tool, but we must always remember that, “They aren’t truth meters. We shouldn’t use them as arbiters of political conflicts or as answers to ethical quandaries.” They should be supplemented by—or better yet, they should supplement—reasonable arguments, which will often take the form of stories. This would certainly be an improvement, but Nietzsche reminds us that Stone’s genealogical procedure can be applied just as easily to discursive reason as to numbers. The power games that she identifies in counting are also present in argument, which is, after all, perfectly capable of hiding its own values.

Stone’s own unspoken commitments are pretty standard liberal American assumptions about the need for equity and the importance of personal freedom. Many of her readers will share these assumptions, but even those of us who do might be a little irked by her consistent treatment of them as obviously correct. Her right-thinking achieves a tragic irony in the book’s final chapter, which contrasts President Trump’s approach to the COVID-19 pandemic with Governor Andrew Cuomo’s. Stone rightly criticizes Trump for his willful ignorance of the virus’s deadliness, but has effusive praise for Cuomo, who supposedly “believed that people would be reassured by his honesty and by knowing that he was facing the beast head-on.” This praise sounds ludicrous now that we know that Cuomo manipulated the data, too, his aides preventing New York’s health officials from releasing accurate nursing-home death tolls for many months. A writer as disinclined to trust Democratic politicians as Republican ones would have been less likely to give herself this black eye.

This is the rare error, however, that reinforces, rather than undermines, the argument of the person who commits it. Stone is right that our arguments often treat values as given rather than proving them. And the more apparently objective the datum, the more pernicious its concealment. Counting is a valuable tour of the hidden subjectivities behind public objectivities—and all the more valuable because it accidentally reveals its own subjectivity.

Michial Farmer is one-third of the Christian Humanist Podcast and the translator of Gabriel Marcel’s Thirst (Cluny Media, forthcoming). He lives in Atlanta.