After Nationalism: Being American in an Age of Division 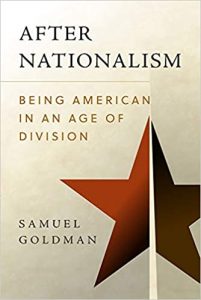 In After Virtue, Alasdair MacIntyre described a world in which moral language had lost all meaning. People continue to use a shared moral vocabulary, but they will not find consensus because the terms they use are underpinned by incompatible and often incoherent assumptions.

In After Nationalism, Samuel Goldman argues that our understanding of what it means to be an American is in a similar state, only worse—for there was never any consensus to begin with. “We do not merely disagree with each other about [the nation’s] origin and purpose. We disagree with ourselves, relying on rickety amalgams of words, authorities, and examples that crumple under scrutiny.” Yet we continue the battle, for despite the lack of an obvious, cohesive culture, “we are educated to believe that all the fragments of national history and experience would somehow fit, if only they were provided with the appropriate frame.”

The futile quest to discover that unifying frame of America is Goldman’s theme. He devotes one chapter each to the three primary myths that have sought to define the nation and shape notions of American citizenship: the covenant, the crucible, and the creed.

The covenant had its origins in the Puritan “city upon a hill,” but is also used to describe the idea that America was defined by a particular culture, inherited from England and largely carried on in the “New” England. America, by this account, was embodied by the mostly Anglo-Saxon, Protestant Brahmins with a commitment to moderate egalitarianism and a manifest destiny mirroring that of the Biblical Hebrews to populate a promised land.

The crucible represents the idea of the American “melting pot,” a country open to all, where separate, or “hyphenated” identities fade away in favor of a new people whose future could be altogether of its own choosing.

The creed is the nauseatingly ubiquitous belief that “America is an idea.” It came into its own in the mid-twentieth century, in the context of ideological struggle and in the wake of the obvious failure of the “melting pot” to actually melt. Whatever one’s background, culture, or religion, one can be an American with a shared commitment to the high ideals of liberty, equality, rule of law, and democracy.

Goldman shows how each of these myths oversimplifies the American experience, overstates its historical pedigree, and overestimates its ability to cut across the meaningful divisions that always have and will continue to exist across American society. Perhaps most importantly, he observes that these interpretations often amount to “glittering generalities” typically adapted as needed “to stand as proxies for political argument in the present.”

All three approaches seem to share the desire to find a pure America that once existed—either in a particular cultural unity, a progressive vision, or ideological agreement. Not only was America unified, it was unified around a pure and worthy identity.

In its original form, the covenant considered the Puritan settlers to be God’s chosen people in a very literal sense. But even after its subsequent evolution, the covenantal symbol retained the sense that Americans were a certain type of elevated people, whose manners, religion, morality, way of life, and (in its nastier iterations) race and ethnicity set them apart as pure.

The crucible finds the pure America always in the future. The “melting pot” was gradually purging its citizens of old cultural identifiers and producing a new man. Drawing on German idealism, it pictures America as the vanguard of humanity, moving into a millenarian future beyond the conflicts and tensions of national, ethnic, and cultural conflict (though, of course, the advocates of this view were never fully inclusive, especially in their treatment of Chinese immigrants). The most fundamental problem with this vision, however, was simple. As Goldman quotes Nathan Glazier and Daniel Patrick Moynihan, “it did not happen.” As such, there is a sense of nostalgia even around this progressive vision: somewhere along the way, America abandoned the path of Progress.

The creed finds the pure America in its ideals. By making the nation essentially ideological, creedal understandings have an easy mechanism by which to dispose of the less-than-admirable elements of American history and society: that’s “not who we are.” America is the story of a people gradually living up to ideals that had always been at its core, unless and until those founding principles were abandoned. But the various elements of the American creed are vague, highly debatable, and often in contradiction with one another:

Observers of American politics had long noticed that simultaneous commitments to liberty and equality, the pursuit of justice and respect for the Constitution, the universality of moral principles and particularity of the nation did not entirely hang together. Under social and political stress, one aspect could be pitted against another.

Ideological prerequisites for being a true American are so popular in large part because everyone assumes that it is his ideology.

How, then, are we to hang together? Goldman’s advice on this point is much needed, though somewhat underdeveloped. We must give up the search for purity, complete unity, and exceptionalism, looking instead simply for “the terms on which we can live together.” The insistence on a single national identity can easily devolve into a tool to casually dismiss unwanted views, experiences, or memories as “un-American.” By “obscur[ing] the reality of conflict between ideals, interests, and loyalties” that has always existed, it would have us believe that some nefarious change has recently tossed us out of Eden, thus distracting us from the responsibility every generation has to grapple with the political reality of the here and now.

By this account, what unites Americans is the simple fact that we have and continue to live together under law. It constitutes a “We, the people,” that is “generated and sustained by our interactions under specific institutions in a particular place.” This is, of course, a conception too “low” for many to embrace. America is neither a refined and cohesive culture, nor the culmination of world history, nor the embodiment of philosophic truth—it is a modern country like any other, that must manage inevitable moral, ideological, and cultural differences to seek as best as possible the good of all who live in it.

We must, then, recognize the reality of pluralism, even if we also see the distinct challenges it poses and work to mitigate them. Goldman points to decentralization, political limits, and institutions that provide “the opportunity to channel . . . disagreements into compromises, while giving the losers a refuge from outcomes they cannot fully endorse.” In short, he prescribes “constitutionalism, the rule of law, and civic equality,” not as an ideology but as “rules of coexistence.”

One might take this description to suggest that the American experience has no content whatsoever; that we are just perpetually muddling through a kind of postmodern wasteland hoping not to kill one another. I don’t think that is the case. Goldman recognizes that there are things of value in all three myths. The problem is when we overstate their pervasiveness or attempt to identify them as the defining American characteristic, under-appreciating the dynamic tensions that have always been at work.

By clearing the field of myths and ideologies, I believe Goldman’s approach might create space for a simpler and more instinctive unity—one rooted in, as Roger Scruton often emphasized, neighborliness and a commitment to a shared home. The American tradition of constitutional self-government that Goldman emphasizes is designed to accommodate the variety that such a conception of national bonds allows. Moreover, hundreds of years under such a system may generate symbols and commonalities that amount to an American identity, though less comprehensive, theoretically consistent, and centralized than those put forward by the three myths. When it comes to the more substantive goods valued by myths, constitutionalism allows for the preservation of worthy ideas and culture on a different (and better?) plane than the political. On this question—the ties of citizenship that are possible—one might wish that Goldman had offered more.

It is a tempting thing—especially for political theorists steeped in philosophies of the “best regime ”— to shape America into the form that we think it ought to take. Machiavelli warned against applying theories of “imagined republics” to real ones. Goldman similarly warns of the dangers “imagined Americas” pose to the real one.

In the introduction, Goldman declares that, while he seeks to debunk unsustainable myths, he also writes “as a patriot. In other words, I believe that this country is, if imperfect, worthy of loyalty, celebration, and, when necessary, defense.” This statement alone distinguishes his approach from the dominant narratives of both Left and Right. The Left today looks back at the practices of America’s past and finds impurity. Traditional America must, therefore, be rejected and radically remade. The Right looks back to the ideas and culture of America’s past and finds purity. Traditional America must, therefore, be embraced and recovered. Here, Goldman suggests that the citizen ought to be attached and loyal to his country even if its record is quite mixed. We should love our country—and work to improve it—because it is our own.

“Say not,” admonishes the Book of Ecclesiastes, “‘Why were the former days better than these?’ For it is not from wisdom that you ask this.” There is no political Eden for America to recover. There is only the sweat of our brow.