In Defense of Divine Justice 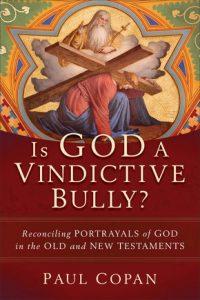 Is God a Vindictive Bully? Reconciling Portrayals of God in the Old and New Testaments
By Paul Copan.
Baker Academic, 2022.
Paperback, 320 pages, $27.99.

Recently, while I was reading Paul Copan’s Is God a Vindictive Bully? and intermittently participating in a family discussion, my son said to me, “I can’t take you seriously when you’re reading that book.” I objected, noting that it is indeed a very serious and necessary book, particularly for Christians with legitimate questions about various baffling aspects of the Bible. Despite having frequently taught an introductory course on the Old Testament, I approach every class on the book of Joshua with a mixture of excitement and trepidation. The excitement stems from anticipating the thrill of victory as the Israelites finally enter the Promised Land after their miraculous escape from the clutches of Egypt’s (arguably) most incompetent pharaoh; the trepidation comes from the certain knowledge that despite my carefully organized notes and PowerPoint presentation, it will not be long before my students’ faces crinkle with doubt and concern. Finally, one of them will ask the question that has been on everyone’s mind: What about all the violence? Then, for the remainder of the class, we struggle and wade our way through the issue together, and I pray that they do not emerge from the class as scarred as the hapless Canaanites.

The issue of violence in the Bible is by no means confined to the book of Joshua, though Joshua is perhaps most often criticized in this regard. As Copan moves through passages from Leviticus, Numbers, and Deuteronomy, among others, it becomes clear that the destruction of Israel’s enemies casts a dark shadow over the entire Old Testament and even seeps its way into the New. To shed light on the topic, however, Copan rightly considers the more “troublesome” passages of the Bible as part of a canonical whole—that is, he studies them in the context of the entire Bible, the purpose of which is to reveal God’s identity. As Copan points out early in the book, a God who does not punish those who oppose him is not a just God. And who, after all, wants to worship an unjust God?

Not to be overlooked is the fact that even God’s beloved Chosen People are subject to discipline and punishment—for the purpose of purification—when they reject him. Fifty years of exile in Babylon was not part of a coy game of hide-and-seek between God and his Israelite sons and daughters; rather, it was the natural conclusion of ignored warnings, repeated worship of foreign gods, and social injustice. Justice, as Copan reminds us, is not solely for the enemies of Israel; it is part of God’s divine plan for all of us, and so punishment must be occasionally endured in order to enact the fulfillment of that divine plan.

Addressing the objections of two groups, described as “critics from within” and “critics from without,” Copan discusses topics that pose a challenge to readers, such as the popularly maligned Lex Talionis (“Law of Retribution”), the enactment of “divine smitings,” biblical references to slavery, the issue of herem warfare (commonly known as “the ban”), and the latent Marcionism that pervades Christianity today. (Marcionism asserted that the God of the Old Testament is not the same as the God of the New Testament. It was condemned as a heresy around the turn of the third century A.D. Poll a group of Christians and you are likely to find at least a few latent Marcionists in their midst.) Copan demonstrates with intricate charts that the distinctions such critics draw between a “textual” God and the “actual” God are false when read through the lens of canonical criticism. For example, he points to numerous passages in the Old Testament indicating that, despite divine orders to eliminate the Canaanites, quite the opposite occurred. Many Canaanites survived the assaults and went on either to make treaties with the Israelites or to continue tormenting them. The purpose of the intended annihilation, as Copan points out, was to eradicate idolatry and thus redirect the Israelites towards God—a right and just cause on the part of the God who created them.

At the heart of the critics’ attempts to distinguish between the “textual” and “actual” God is the notion of cruciformity, a criterion by which, according to Copan, “the character of God is most clearly expressed when Jesus cries from the cross, ‘Father, forgive them.’” Copan further states that “[Gregory] Boyd would have us think that divine harshness can’t be connected to God because this isn’t the ‘heart’ of God’s character.” Boyd’s approach creates a “false dichotomy” that has earned critics like him the designation of “practical Marcionists.” Also inherent to this questionable approach is the attempt to drive a wedge between Jesus and Moses, who is depicted as a “misguided, fallen, violence-prone prophet who often misheard and misrepresented God’s message.” It is difficult to fathom how such a position can be supported in view of Jesus’ direct statements to the contrary—“Do not think that I have come to abolish the law or the prophets. I have come not to abolish but to fulfill” (Matt 5:17) —yet given the number of arguments to which Copan responds, the critics seemed determined to try.

Copan devotes four chapters to comparing Mosaic Law to other Ancient Law Codes, and in doing so defends the moral component of Israelite Law and highlights what distinguishes it from other codes: it forms part of a loving covenantal relationship that is both “personal and relational.” As such, it promotes the dignity of all, providing protections for the poor and the enslaved that did not exist in surrounding cultures. As a natural corollary to this discussion, Copan places issues pertaining to slavery and the role of women in context. Regarding the former, Copan points out that the Bible frequently mentions the option to pay fines rather than exact the physical reparations that seem to be required by the Lex Talionis. He reminds us that the fixed six-year limits on slavery and the practice of a “Jubilee year” far exceeded the requirements of other ancient Near East law codes and affirmed the dignity of each person. Throughout these chapters, Copan is careful to distinguish slavery in an ancient context from the race-based slavery that is such a blight on American history. Notably, kidnapping of any kind (the enslavement method of choice among colonial slave traders) was strictly forbidden by Israelite, Babylonian, and Hittite laws.

Regarding the role of women, Copan highlights the impact of some very powerful female characters in the Bible, such as Esther and Ruth, and refutes the notion that biblical women were victims of patriarchy. He reminds us that even prominent scholars such as Carol Meyers reject the designation of Israelite society as “patriarchal.” Though ancient Israel may not have been the model of perfect gender equality, the word “patriarchal” is misleading because it suggests a male dominance that is simply not supported by what modern scholarship has revealed about the invaluable role of the Israelite women. Copan proposes “heterarchy” instead, which he defines as “the existence of multiple, complex hierarchies of ‘power dynamics’ that involved both independence and mutual dependence.”

A few minor criticisms must be noted. At times, I had to re-read Copan’s statements to determine whether he was stating his own argument or playing devil’s advocate by summarizing the argument of an opponent. Gregory Boyd is the critic most often refuted in the book, but quite a few references to his ideas are cited only through secondary sources. To be fair, however, this tendency is counterbalanced by numerous other citations of Boyd’s own work. Copan sometimes seems overly determined to defend a text and make it fit his argument. Yet the flip side of this approach is that his rugged determination usually pays off in the end, and he presents at least a reasonable, if not completely convincing, argument.

A quick search on the topic of “violence in the Bible” yields results that are specific either to one or two books of the Bible or in their choice of hermeneutic (such as a “literary-feminist” approach). Other options are somewhat pedantic in an attempt to be comprehensive. Copan’s approach, on the other hand, provides what most biblical resources lack: a systematic discussion of the issue of violence all in one book, written in a simple and engaging style. The potential impact of this is enormous. Though the book will undoubtedly make more sense and be easier to absorb for those who are well schooled in the Bible, Copan’s thoroughness and directness make the book accessible to someone who is at least willing to do a bit of homework while reading it.

My son’s response to the title confirmed what I had been wondering as the book followed me to the gym, to the supermarket, and even on a recent flight to Florida. Surely it had raised more than few eyebrows. But this is a conversation that needs to take place. Without the kind of exploration that Copan provides—one that engages scholars from multiple vantage points, quoting the most prominent scholars in the field, such as Gordon Wenham and John Goldingay, while unabashedly confronting the criticisms from Christians, atheists, and those who lurk in between—Marcionism will continue to slither its way through Christianity like the serpent in Genesis. Believing in such a dichotomy between the Old and New Testaments means that we can never attain the goal of the Bible: truly understanding to the best of our human capability who God really is. Yes, God is loving, benevolent, and merciful, but he is also demanding and strict. This is a message that pervades the New Testament just as much as the Old. In support of this, Copan refers to instances in which Jesus clearly advocates for divine justice: “Whoever causes one of these little ones who believe in me to sin, it would be better for him to have a great millstone hung around his neck and to be drowned in the depths of the sea” (Matt 18:6).

So go ahead, read Copan’s book on the subway. Add some of his other books to your wish list, such as Is God a Moral Monster? or Did God Really Command Genocide? You may raise a few eyebrows, but that is a good thing. Maybe those who are surprised at the titles will engage you in conversation. With Paul Copan’s books, you will have at your fingertips the answers that concerned Christians everywhere are seeking.