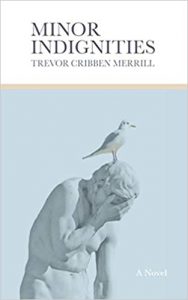 Reading Trevor Cribben Merrill’s first novel, Minor Indignities, one finds a fictional analogue to William F. Buckley’s God and Man at Yale, and one wonders perhaps, in an age generally given to fiction (even if Netflix rather than novels), whether many might not be better off reading Merrill. The novel’s plot centers on narrator Colin Phelps bumbling his way through freshman year at the unnamed Ivy League college in New Haven that’s definitely not Yale, and somehow finding his way closer to the Catholic faith and away from postmodern irony through humiliation, even as his classmates generally descend into an ideological abyss. Minor Indignities serves as a useful reminder to Boomers and Gen X’rs horrified at the ascendant state of gender ideology and critical race theory in their children and grandchildren’s preschools that the root of our American educational perversity draws strength from decades deeply buried in their own memories.

However useful the vision of the novel may be to these readers who have tended to dwell in the mudroom of the house of fiction, others may initially find a few elements of craft lacking. Such readers may find themselves puzzling over why the author seems to be occasionally throwing narrative darts just to the left of the bullseye, but we may find the solution in the narrator’s examination of his own relationships.

Any novel or short story needs to begin by establishing what novelist and critic Caroline Gordon called “the post of authority,” or the point of view. Readers, intentionally or not, are looking to understand the trustworthiness of the storyteller, whether the narration is third person omniscient or first person. Not all first person narrators are created equal—the post-whale voyage ramblings of Moby Dick’s Ishmael asks the reader for a different kind of trust than the seemingly factual reporting of The Great Gatsby’s Nick Carraway. Establishing the character and situation of a first person narrator well is especially important for the form Merrill works to establish, the campus novel, as the narrator finds himself reflecting on experiences from late adolescence, when he was not particularly gifted with self knowledge.

Some of the more enduring campus novels, such as Evelyn Waugh’s Brideshead Revisited or Donna Tartt’s cult classic The Secret History, confront this challenge by placing the campus action within a larger frame narrative. Waugh’s hero Charles Ryder, for instance, is prompted to recall his sacred and profane memories of time at Oxford much later in life, because the army unit he has joined ends up encamped at Brideshead, the house of his former friend Sebastian Flyte. Tartt’s protagonist Richard Papen, likewise, begins his narrative as a 28 year old literature PhD remembering the only story he can now tell, that of his implication in the murder of his college classmate through the chaotic results of his Classics cohort’s Dionysian researches.

Merrill’s Colin Phelps, on the other hand, presents us with no frame narrative or other sense of where or who he is by the time he tells us this story of his freshman year. We simply begin in medias res as he recounts leaving his parents’ house for the College’s move-in day. Thus, the problem of the “post of authority” falls on the reader’s shoulders. However, we begin not only with one problem, but with two. Fantasy writer Jim Butcher (of the wizard detective Dresden Files series fame) has said that the benefit of using a first person narrator is establishing a kind of intimacy between the story and its readers. This intimacy can create a problem for the reader, however, when the narrator is not the type of person one would want to know with such familiarity. The problem, for instance, of reading Vladimir Nabokov’s Lolita is not simply that the novel presents the story of a pedophile, but that the first person narration by Humbert Humbert implicates the reader in his perverse desire. The problem for the reader of Lolita is akin to C.S. Lewis’ problem in writing The Screwtape Letters: the possibility of an imaginative cooperation with evil.

While Colin is certainly not as wretched as Screwtape or Humbert Humbert, a reader of a certain sensitivity will find him a bit repulsive from the novel’s beginning. His narration from the novel’s opening has a decidedly narcissistic feel—of the first paragraph’s ten sentences, only three do not contain the first person pronoun in some form, and these are the paragraph’s shortest sentences. This kind of self-obsession on the part of a narrator hinders some of the demands of literary realism. In the novel’s opening chapter, we first hear a great deal before we see: for instance, when Colin’s high school girlfriend interrupts his departure to wish him goodbye, we are presented with her dialogue before being told of her “sweatshirt-clad arms,” and later, her “tear-stained face,” but these brief remarks are about all we receive of her physical description. The normal, distant boyfriend of the rising college freshman variety would notice his girlfriend’s physical appearance a bit more than this.

Colin’s narrative voice does improve as the novel unfolds. As we might expect of this narrator who was a student in creative writing, his telling of his own story reveals an improvement in narrative style. Here Merrill treads familiar ground: as a combination of campus novel and Bildungsroman (the story of an artist’s development), Minor Indignities echoes Waugh’s Brideshead. If one assumes, as this reader did, that Colin pens this remembrance of freshman year sometime the summer after, the development from a kind of narcissistic narrative voice (for which a close friend in his writing seminar criticizes his writing) to one more open to seeing the world appears realistic. This assumption, however, is ungrounded and finally undercut when, in a narrative aside about halfway through the novel, Colin alludes to the fact that he is writing about ten years after the events he recounts, in the late aughts, making Colin 28, as old as Tartt’s Richard Papen.

In How Fiction Works, James Wood notes that the successful literary realist after Flaubert relies on gratuitous detail to convince his readers to suspend their disbelief. Colin’s narration brings the reader up short of the right amount of gratuity. For Colin patterns the texture of his novel, despite his creative writing teacher McClatchy’s advice to take up drawing so he might learn to see, not on Flaubert’s Madame Bovary but more so on Jane Austen’s Emma. The comedy of manners requires less in the manner of ocular detail and more in a continuous attempt to render the moral character of its personages visible.

By the novel’s end, as Colin experiences a first conversion away from “postmodern irony” to the seeds of Christian conscientiousness, it becomes more apparent that Colin, as both narrator and character, possesses a real affection for his friends, in all their moral imperfections and intellectual folly. In a book so caught up with intellectual questions—whether literature or philosophy is a better guide to living well, what contribution hook-up culture makes to male self-loathing, how moments of crisis can reveal our past failings to us—what elevates Minor Indignities above non-fiction are the intricate reflections of narrator-Colin on his interactions with his friends, from his roommate Rex to girls such as the homely Catholic Julia or the dangerously non-monogamous Margot. It is these reflections, pursued in a self-scrutinizing manner à la Augustine’s Confessions, which reveal Colin’s slow growth in charity and his awareness that he has a problem, a soul sickness named and addressed in “just one unlikely place,” the nearby Catholic Church.

Minor Indignities compelled me to read it twice in the span of two years, searching for Colin’s point of view. Through narrator-Colin’s minute digressions, Merrill thus reveals a propensity for fiction not only thought-provoking, but also soul-searching. I confess, I may have to read it a third time to grasp this chapter in Colin’s spiritual autobiography, but such reading will be time well spent.

Alex Taylor is a doctoral candidate at the University of Dallas.