Is the Religious Right Really so Incomprehensible? 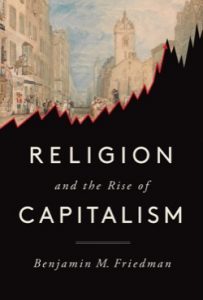 Sometimes it seems like discussions in this country are taking place in two isolated camps. Every now and then, that suspicion seems like a certainty. As an example, I offer you Benjamin Friedman’s new book, Religion and the Rise of Capitalism.

Friedman, a Harvard economics professor, was faced with a seemingly incomprehensible phenomenon: “the puzzling behavior of many of our fellow citizens whose attitudes toward questions of economic policy seem sharply at odds with what would seem to be their own economic benefit.” The puzzle is why people oppose things like higher tax rates and inheritance taxes. Even more unsettling is that those with this aberrant voting behavior “disproportionately belong to the nation’s increasingly influential evangelical churches.”

Shocked to discover this link between economic conservatism and religious belief, Friedman sets off to explain. His research led him far and wide. The bibliography in this book runs to thirty-four pages. Yet, somehow Friedman missed George Nash’s book, The Conservative Intellectual Movement in America, which has a detailed explanation of how the unification of these two groups occurred. Nash should not feel slighted, however. There is also no mention of Michael Novak’s The Spirit of Democratic Capitalism. Russell Kirk is missing. So is Richard John Neuhaus. We could make a game of this, but it gets old pretty fast.

Instead of reading all those books, Friedman spins a historical tale showing how thinking about economics has always been heavily influenced by religious thought. Once again, that is a deeply interesting question. How did the Greek thought emerging from Athens and the religious thought emerging from Jerusalem combine to create Western Civilization? Many books have been written on this subject. Those books are also not in Friedman’s bibliography.

Instead, Friedman begins his story with Adam Smith and David Hume, which is the obvious place for an economist to begin the story. But neither one is noted for being religious. How then to spin the beginning of economics as emerging from the primordial soup of religion? Friedman argues it was the demise of Calvinism and its doctrine of predestination. Why does this matter for economic theory?

A person’s incapacity to make any choice or take any action to promote his ultimate spiritual prospects bears a natural affinity to a parallel inability to make choices or take action to improve one’s material well-being. Such a person systematically acting in ways that made others better off would seem even less likely to the predestinarian way of thinking.

Apparently if one thinks the fate of the soul is entirely up to God, then one thinks there is no connection between working and having food. Similarly, believing that the chief end of man is to glorify God means one is totally indifferent to having food or starving. Moreover, Calvinists would never care for the poor or practice medicine.

As Friedman tells the tale, it was only when belief in predestination waned in England in the eighteenth century that Smith could discover that specialization of labor and exchange resulted in better living conditions for everyone. His thesis runs into huge trouble when he turns from England to America. In America, Cotton Mather “admired the new wave of scientific discoveries such as Copernican astronomy and Newtonian physics, and he saw it as his responsibility as a pastor to educate his parishioners about them.” Jonathan Edwards argued that “human well-being and God’s glory are inseparable.” Both were Calvinists.

One might have thought that realizing that a belief in predestination did not stop Mather and Edwards from supporting the burgeoning technological revolution would have induced Friedman to rethink his argument that the retreat of Calvinism was a cause of The Wealth of Nations. Maybe the reason that theologians before Smith did not contemplate economic progress was because, as Friedman notes, “As late as the 1820s, although many people realized that they were living better than their parents and grandparents, there was still no awareness of the possibility of improvement that would go on indefinitely.” Since Calvin wrote nearly three centuries before the time Friedman argues that anyone thought continual economic growth was technologically possible, perhaps that, and not his belief in predestination, was the reason that Calvin did not spend a lot of time examining the matter.

Postmillennialists are Friedman’s heroes; they morph into the preachers of the Social Gospel who then morph into the Progressives who are the high point in the narrative, doing things that Friedman likes. Alas, retrograde forces were still at work. D. L. Moody in particular, killed off the Social Gospel. Moody’s problem was that because he was a premillennialist, he was more concerned with saving souls than increasing the power of labor unions.

In the post-war era, the only set of religious leaders left on the scene were political conservatives. This might surprise you. Remember the thirty-four-page bibliography in Friedman’s book? You would never know that there were any liberal religious leaders in the second half of the twentieth century. The post-war era is dominated by two people who created a fear of communism. William F. Buckley Jr. and Billy Graham frightened premillennial Christians into believing that communism was a godless menace, so they haplessly fell into voting for economic conservatives. It’s that simple. Once communism vanishes, religious people live in a Cold War hangover, voting for things that Friedman knows are not in their own interest.

Even though a substantial portion of the population believes in a religion that gives them no ability to understand their own interests or believe the world should be made a better place, Friedman is not in total despair. He concludes:

No one in a democratic society is going to tell citizens that their religious presumptions are wrong, or that the implications that follow from them for economic policy are flawed. But clearly understanding the substance and origins of the world view that underlies our fellow citizens’ participation in this essential part of our democracy is sure to make it work better.

We can’t tell these people they are wrong, but we can hope that by understanding their warped thinking, we can make things better.

Yet after four hundred pages of this history, is there any evidence that Friedman has even the slightest understanding of the substance and world views of the religious people whose voting behavior he finds so odd? The general tone of the book has nothing at all to do with trying to understand Calvinists or Premillennialists, let alone the religious right. Instead the tone is best described as being a carnival barker for a World of Wonders. Look! There are people who really believe that God predestined people to go to heaven and who believe the world is going to end before it is perfected and read strange books about the End Times! The general incredulity is perfectly captured in my personal favorite remark: “The Puritans, following Calvin, had accepted the doctrine of the Trinity.” Calvin invented the Trinity?

When Friedman discusses nineteenth-century debates about international trade, he notes the arguments are framed in religious terms. Is the presence of oceans proof that God wanted nations to trade with one another or that God wanted nations to develop independently of one another? In a religious age, it is not a wonder that people invoked religious arguments for their preferred policies. People do the same thing today. If only Friedman had spent as much time reading what modern religious and economic conservatives think as he spent discovering the marvels of old religious debates, then maybe this book would have been more than spurious historical arguments. The depressing thing about Religion and the Rise of Capitalism is that it perfectly exemplifies the fact that we are, in Charles Murray’s phrase, coming apart.

James E. Hartley is Professor of Economics at Mount Holyoke College. You can follow him at jamesehartley.com.