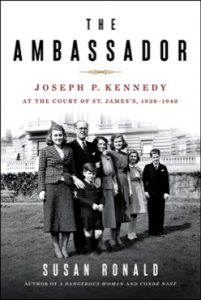 In this meticulous, relentless biography, Joseph P. Kennedy is now firmly established in the annals of twentieth-century fascism. When he arrived in England in early 1938, he quickly found a home among the ruling elite who believed, as Susan Ronald puts it, that “fascism was the cure for communism.” Notwithstanding FDR’s unprecedented provocation of sending an Irishman with no diplomatic skills to Great Britain, Kennedy immediately sided with Prime Minister Chamberlain and the appeasers, believing that any deal with Hitler—no matter how humiliating and lethal to the lives of millions—was preferable to war. Kennedy never stopped believing that Hitler could be bought off, that businessmen could do business with fascists.

But appeasement, in and of itself, is not, of course, a form of fascism. Even Neville Chamberlain eventually realized that Hitler’s cruel lust for power could not be satiated by offering so much of Europe to his suzerainty. FDR understood that Hitler could not be appeased and became increasingly wary of Kennedy, but kept him in England because the President felt the Ambassador’s defeatist attitudes would demoralize the American people and undermine democratic life. Kennedy, on his leaves home, lectured FDR and said “very frankly” that the United States “would have to come to some form of Fascism here.” He did not believe Great Britain could survive a war against the fascist powers and that America would become increasingly isolated and lose control of its markets if FDR’s government did not take over control of the economy to counter Hitler’s hegemony over his capitalists. Kennedy proposed that the President “organize a small powerful committee under himself as chairman and this committee would run the country without much reference to Congress.”

Kennedy thought solely in terms of economics. Although he said he cared about the fate of Jews and persecuted minorities, in the end he thought they would have to be sacrificed for the greater good of the United States and its allies. Like Hitler, Kennedy believed in a Jewish cabal, which had thwarted him and that was intent on instigating incidents that would draw America into a disastrous war. “To defeat fascism,” Kennedy argued in a memorandum, the United States would “have to adopt totalitarian methods” and strike deals with dictators.

When the war actually began, Kennedy remained defeatist, proclaiming to journalists, to his British colleagues, and to FDR himself that Great Britain was finished as a world power and that a German invasion of the UK would succeed. Even after the heroic RAF victories during the Blitz and the Battle of Britain, Kennedy predicted defeat. In short, he never acknowledged that the will, the spirit, or the values of the democracies would triumph in war. Democracy, he insisted, would be vanquished.

Halfway through this extraordinary exposé, I wondered if Ronald might be selecting only the worst examples of Kennedy’s views. But she has the goods in terms of the documents that reveal Kennedy in his own words—supremely confident of his judgment and certain that history would vindicate him. Even so, I turned to David Nasaw’s monumental and well received biography, The Patriarch: The Remarkable Life and Turbulent Times of Joseph P. Kennedy (2016). There you will find much to admire about Kennedy—a splendid father who took greater personal care of his children than his wife did, a mentor who allowed his children to grow into their own views and, notwithstanding his fascist politics, encouraged in them a freedom of development that his worldview denied to others. In Nasaw, we see the nucleus of Ronald’s view of Kennedy’s fascism, but she takes the story into greater depths of perfidy.

I use that word—perfidy—because Kennedy, who prized loyalty in his friendships and business dealings—was the epitome of disloyalty. He rarely missed an opportunity to undermine the President’s and the State Department’s policies, giving interviews and establishing his own line—precisely the opposite of what an ambassador should do. And nothing changed when Churchill took over from Chamberlain. Kennedy regarded Churchill as delusional with his talk about fighting to the last man, from Canada, or wherever he could maintain the idea of a free Great Britain. The very idea of democracy, of an idea worth fighting for, seemed ridiculous to Kennedy.

Needless to say, the British foreign service and even the friends Kennedy had made in the Chamberlain circle, parted company with him as soon as war had been declared. How could they marshal their strength when this American kept telling everyone they were already beaten? They wanted Kennedy removed, but it was a delicate matter, especially since they wanted American aid. So long as FDR kept Kennedy in place, they had to tread warily, making sure that the loquacious, indiscreet ambassador was no longer privy to state secrets. An outraged, mystified Kennedy, always vain about being considered an insider, blamed everyone for his ostracism except himself.

FDR finally brought Kennedy home, carefully charting the ambassador’s route and sending notes emphasizing he was not to talk to the press. FDR needed Kennedy, who had been a successful chairman of the SEC and a self-made millionaire, to speak on his behalf in an appeal to the business community and to the Catholic vote, which seemed to be inclined toward Wendell Willkie, FDR’s opponent in his run for a third term. In front of several people in a White House meeting, Kennedy chastised the President as if he was a business partner in a deal gone bad, blaming FDR for not consulting him, for allowing others in the State Department to conduct affairs without consulting the ambassador. FDR, well practiced in duplicity, never admitted any responsibility for the attacks on Kennedy, shifting the blame to the State Department for any miscommunications or slights. Now in America, the ambassador had to be treated gingerly, since he was expected to give a nationwide speech endorsing the President’s re-election. Kennedy did so. FDR got what he wanted from Kennedy, and after a resounding electoral victory, got rid of him—although he allowed Kennedy to think he was getting rid of FDR.

As disgraceful as Kennedy’s behavior was, Ronald is careful to provide a historical context, to show that many in England shared—at least at the beginning of the ambassadorship—Kennedy’s appeasing fascist proclivities. A man utterly lacking in introspection, he never understood why these same people turned away from him. All he could think, as he never got tired of saying, is that he had been done wrong. He never recovered his reputation and was never offered another significant government post.

Carl Rollyson is the author of American Biography and regularly reviews biographies of presidents and other political figures while working on a book on presidential biography.