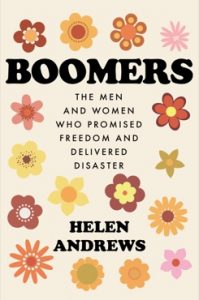 My history thesis advisor in college was fond of saying that one of the main drivers in new scholarship is the desire to kill one’s father. The ambitious young scholar gets a thrill out of saying, “aha, look at the pitiful errors made by those who came before me, and admire how wise I am to overcome those errors through my sheer intellectual prowess.” While acknowledging that this desire can be productive, my advisor pushed his students toward a counterbalancing ethic of charity toward the past as a means of facilitating greater understanding.

Helen Andrews is one of the sharpest writers of the millennial generation (of which I am a part). I mean sharp in a double sense, the first being that she is incisive and the second sense … well, as she reports her own editor saying in the preface, she can be mean. Andrews’s new book Boomers: The Men and Women Who Promised Freedom and Delivered Disaster embodies much of the “kill your father” ethos—and it does so with plenty of sharp zingers. A particularly memorable example occurs early in the book: “Before the Renaissance, would-be discoverers of Aristotle were sometimes told by zealous churchmen that anything written before Christ was ipso facto not worth rediscovering. This is approximately how the boomers feel about themselves.” Less comedic, but no less sharp, is Andrews’s more sociological description of the generation: “drugged up, divorced, ignorant, and indebted, but at least they did it out of idealism.”

That latter bit about idealism is especially sardonic given that it is this very idealism (described elsewhere in the book as “liberal pieties”) that is most evidently in Andrews’s rifle sights. Though the book is organized around seven representative figures—Steve Jobs, Aaron Sorkin, Jeffrey Sachs, Camille Paglia, Al Sharpton, and Sonia Sotomayor—the profiles are merely instrumental in allowing Andrews to aim at the usual targets for today’s reactionary conservatives. Thus, Jobs becomes a proxy for Big Tech and Big Business; Sorkin represents the inability of mainstream media (including entertainment) to properly depict evangelicals; Sachs stands in for the neo-imperialism (here and abroad) of cosmopolitan technocrats; Paglia personifies the sexual decadence of the era starting in the 1960s; Sharpton underscores the author’s discomfort with race activism; and Sotomayor provides inspiration for decrying affirmative action as symptomatic of judicial overreach.

It is one of the book’s richest ironies that while Andrews bemoans the “boomer’s preoccupation with oppression, identity, and grievance,” her whole book is itself an exercise in such grievance, however elevated it is by its literary qualities. This is not exactly a dig against the book, by the way, but simply an observation that the book is exactly as it is billed. On the other hand, Andrews herself furnishes her critics with a blade when she writes in the final chapter that “it’s always the people who most hate the idea of turning into their parents who end up doing so,” a pattern that she rightly recognizes means that “we continue seeing the world in their terms.” Indeed.

Nevertheless, to her credit, Andrews’s stated aim is to go beyond the skewering of a generation in order to “sort their genuine offenses from ordinary filial resentments.” She explains that she was “drawn to the boomers who had all the elements of greatness but whose effect on the world was tragically and often ironically contrary to their intentions.” And she further notes that since “I was going to spend months, even years with these people living in my head, I did not want to pick anyone for whom I felt contempt.” For as much as this book delights in its own scathing tone, I think it is fair to say that Andrews does indeed avoid contempt, even in passages that border on the caustic. I was periodically outraged by sections of the book, none more so than the one dismissing redlining as a “bugbear” that is somehow less relevant to residential segregation than so-called pathologies in Black people such as propensity toward crime. Surely, I thought to myself, someone as smart as Andrews can read with ease a well-known and lauded book like Richard Rothstein’s The Color of Law and so disabuse herself of such easily repudiated regressive views. But my broader point is that even when I was infuriated by these errors and shortcomings, I never had the sense that Andrews despises those with whom she disagrees.

Importantly, Andrews’s book has plenty of insights to offer alongside its errors, and these with equal panache. I believe it is her more noble desire to see a generation sympathetically that allows Andrews to cut to the heart of various issues in a way that is illuminating. For example, in thinking about Big Tech, Andrews offers a carefully reasoned consideration of how the app economy depends on cheap labor with no employee benefits, a materialistic critique that she pairs with an equally powerful deconstruction of the culture of startups that ask their employees to have cult-like devotion to the company brand to paper over exploitative practices.

This consideration of the intersection of material and cultural conditions strikes me as the kind of analysis that is rare: liberals tend to focus on the former, conservatives on the latter, with only a few commentators exploring their interplay. As another example of Andrews’s strengths in offering this dual analysis, consider her chapter on Paglia. Rather than simply dismissing sex-positive feminism and sex work, Andrews instead asks us to consider how subjecting sexuality to the marketplace has led to the exploitation of women in ways that too many liberals can neither acknowledge nor respond to sufficiently.

Even in the chapter that contains the ill-informed dismissal of redlining, Andrews is able to offer a compelling comparison of community organizing tied to organized power in local economies with the rise of cash-grab litigations against mega-corporations. Andrews asks, “why bother organizing a boycott when persuading a regulator to threaten a business deal can get you what you want in half the time?” And she answers that question in a way that reminds me of the late Christopher Lasch: “the tedious work cut out by this more efficient system [professional litigation] turned out, in retrospect, to be essential to the democratic process,” because it involves the broader public and not just a subset of professional elites. This point about broader participation leads directly into her critique of judicial activism, not based solely on unfavorable outcomes of particular cases (the locus of grievance for those conservatives who decried Gorsuch’s Bostock ruling, for example) but rather on the way contrived cases can circumvent the organic deliberation on political issues by the general public.

In a moment in political history where much of the discourse is so dumb it borders on degrading (is there anything more embarrassing than sitting senators talking about controversies surrounding Dr. Seuss books?), Andrews’s book stands out for at least being substantive. And in exploring material conditions alongside cultural factors, Andrews transcends the often myopic focus that defines yesterday’s conservatives. Still, I’m not sure that the book fully realizes its potential. The Left has figures like Malcolm Harris whose latest book, Sh*t Is F*cked Up and Bulls*it: History Since the End of History, is unlikely to be read by many conservatives, if not for offense at the very title, then certainly given his avowed socialism. Andrews’s book, which is decidedly offered to those on the Right, joins with Harris’s in surveying a nation mired in debt, broken families, collapsing infrastructure, unstable and untrusted institutions, and a political class unwilling or incapable of governing. And while neither writer is likely to agree on much beyond diagnosis, they are at least united in laying the blame squarely at the feet of the Boomers. But the great thing about Harris is that despite his socialism, he’s not beating a dead horse on topics like affirmative action that are just so … passé. In comparison to the endless debates going back to the sixties, Occupy Wall Street and Black Lives Matters and all the rest have so much energy. And inasmuch as Andrews’s book gets bogged down revisiting typical conservative grievances, it risks the worst possible sin, that of inducing in its readers a kind of existential boredom.

So what are we to make of Boomers, as a whole? Andrews asks (rhetorically?), “has writing this book left me more sympathetic to the boomers or less?” And she confesses that “It’s difficult to say.” That feeling of ambivalence is a pretty good summation of my own assessment. Certainly this is a stimulating book, and that’s not nothing. But if, as I suspect, Andrews is mostly flexing here, I think we can be rightfully discontented until she produces as her next book something more worthy of her ability. Her final chapter, a short (and much less caustic, much more sympathetic) reflection on the Millennials, signals one fruitful direction for her next project. In particular, I was struck by Andrews’s note that “today’s young people don’t belong to anything, never have, and never expect to” and this is because they grew up in the world the boomers made, which is “denuded of institutions.” Deconstruction is fun, but it’s also much easier than building. I’d like to see what Andrews will offer us in the way of rebuilding our nation’s civil society. In the meantime, we both at least agree that sometimes it’s just really gratifying to say, “ok, boomer.”

Anthony M. Barr is a graduate of the Templeton Honors College at Eastern University and is a current MPP student at Pepperdine University. Anthony has written for several publications including The American Conservative, Plough, and Church Life Journal. He is an editor for the Pepperdine School of Public Policy’s “The American Project,” which promotes a communitarian conservatism.