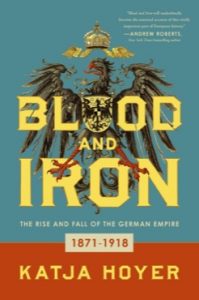 Today the word nationalism provokes immediate fears of a resurgent “blood and soil” fascism. Nationalism stokes “racist or violent or militaristic” sentiments, argues the Washington Post’s Carlos Lozada. One finds similar arguments at the New York Times, New Republic, and countless other liberal media outlets who malign conservative attempts to reinvigorate nationalism as demonstrative of its flirtations with the far right.

Yet, as historian Katya Hoyer notes in her book Blood and Iron: The Rise and Fall of the German Empire, nationalism was originally an idea not of the right, but of liberalism and romanticism. It was liberals, inspired by such philosophical and sociological movements as positivism and social darwinism, who believed strong nation-states were a natural and necessary stage in evolutionary political developments. Conservatives, alternatively, many of whom were landed aristocrats eager to preserve their hereditary possessions and ways of life—and who were wary of centralized authority—often presented the fiercest resistance to nationalism. Also skeptical were leaders of religious institutions, who feared that allegiance to the nation-state would supplant that of God and church.

Can we say they were wrong? In practically every European country, nationalism meant destabilization of ancient social and political norms, the weakening of ecclesial institutions, and the decline of local customs and cultures. At the time of the French Revolution in 1789, only about half of the population of France could speak French, and as late as 1871 only a quarter of its population spoke French as their native language (now it’s at about 90 percent, and many of the indigenous languages and dialects of France are dying).

As Hoyer expertly catalogs, we can observe similar trends in Germany. Before unification in 1871, Germany was composed of thirty-nine individual states. These states had their own cultures, traditions, and dialects that could be traced back centuries, if not longer. Many, like Bavaria, were predominantly Catholic. All of this the Prussian statesman and chancellor Otto von Bismarck had to overcome in order to realize his dream of a strong German empire in central Europe that would rival Great Britain, France, and Russia on the world stage.

Imperial Germany was built upon blood and iron. Bismarck said as much: “Not through speeches and majority decisions will the great questions of the day be decided … but by iron and blood.” Part of this was obviously warfare—the German nation was itself announced in Paris after defeating the French army in the Franco-Prussian war. But there were other conflicts with Denmark and Austria. Bismarck, says Hoyer, “created a Germany whose only binding experience was conflict against external enemies.” In certain respects, this had its desired effect: the conscripted German army served as a sort of melting pot for disparate German peoples, and bound an entire generation of young men together in fighting a common threat.

Yet it wasn’t just warfare. While it is true that within a century following unification the German economy had expanded to compete on the world stage, the costs were significant. While other Western economies experienced an average rise in real wages of about 4 percent between 1890 and 1914, Germany’s only increased by 1 percent during that same period. Many laborers worked twelve hours a day, seven days a week, and even small children toiled in the factories. Berlin tenements were often shared by multiple family members or colleagues. (Later reforms to appease labor-friendly parties banned child labor under thirteen and reduced the workweek.)

Undermining the influence of the Catholic Church was part-and-parcel of this nationalist transition. Bismarck thus pushed measures such as the “Pulpit Paragraph,” which forbade the expression of political opinions and criticism of the government in churches, as well as the School Inspection Law, which granted the state the sole right to inspect and monitor schools, including confessional ones. In 1872, Germany expelled the last two hundred Jesuits. The “May Laws” of 1873 mandated clergymen have a degree from a German university, and for churches to notify the state of religious appointments. Civil marriages became the only legal form in 1875.

Catholics did not take this sitting down. Secularization triggered a backlash from Catholic clubs and societies, who witnessed a dramatic rise in membership and who demanded independence from the reaches of government. At the polls, a significant majority of German Catholics put religious interests over any other, aiming to be faithful to an institution that had accompanied them through every major event of their lives: birth, marriage, death. Nevertheless, by the beginning of World War I, it was clear religion would always be second to national identity.

Speaking of which, it was that conflict that proved the limits of a German diplomacy defined by aggressive militarism. The cost of that four-year conflict cannot be understated: almost 2 million Germans died on the front lines, and of all the German men between the ages of 19 and 22 in 1914, more than a third were dead when the war ended in 1918. Another 4.2 million Germans were injured, and yet another 750,000 Germans died from malnutrition.

It has become common for students of this period to assess that this bloody disaster was the inevitable outcome of a “blood and iron” Prussian militarism that would require yet another global war two decades later to dismantle. Hoyer rightly dispels this myth. Kaiser Wilhelm II was certainly eager to compete with other European empires, particularly Great Britain, as demonstrated not only by imperial Germany’s unprecedented rearmament program but its attempts to match British naval dominance. Yet this was done not to provoke a war but to approach parity for a Germany he believed to be dangerously behind.

Wilhelm’s behavior following the assassination of Archduke Franz Ferdinand in Sarajevo on 28 June 1914 also suggests he was not keen on starting a war that would ultimately cost about 20 million lives. The Kaiser was so relaxed about the situation that on 6 July he continued with a planned summer cruise to Norway. Nor did the German people uniformly play the role of warmongers—there were mass demonstrations for peace in Berlin and other German cities. Writes Hoyer of the Prussian inevitable aggressor myth: “It is not only a simplistic narrative that fails to take into account the complexities of historical contexts but also one that sees individuals as mere passengers of historical currents with no agency over events.”

Nevertheless, Hoyer admits that imperial Germany’s inherent character as a state perennially at war made such an outcome more likely. She explains:

The system fell because it was flawed from the outset, built on foundations of war, not fraternity. The maintenance of national unity required a diet of conflict, the constant hunger for which grew until catastrophe loomed in 1914. The German Empire had come full circle. It ended where it had started: in blood and iron.

She also argues that the roots of German representative government were too shallow, the German people’s connection to republicanism too immature. “The ease with which the German people had allowed their semi-democratic system to descend into a military dictatorship stood testimony to the fact that parliamentary culture was still in its infancy.”

There is another question worth exploring: why, after the catastrophe of the First World War, did the Germans opt to stay together? The answer, says Hoyer, is found in the role of education, secularization, conscription, and industrialism over the course of almost fifty years. Younger generations of Germans had never experienced anything but a nation state. Industrialization had weakened regional loyalties by bringing together Germans from many different provinces and religious backgrounds. Military service bonded young men together against a common foe. “It was not the cry for democracy that had shaped, molded and marked the German national character but the shared experiences of its people.”

Given the resurgence of nationalist politics, not only in the United States but across the West, the rise and fall of imperial Germany is not merely of academic interest. Perhaps the story of modern Germany is instructive for those trying to understand Brexit, Viktor Orban’s “illiberal democracy” in Hungary, or the “America First” sentiments of Trumpism.

Certainly late-nineteenth and early-twentieth century German nationalism culminated in disaster, not only for Germans but the world. The process of unifying Germany brought great hardship and destabilization to several generations of Germans, who saw traditional, familial ways of life erode. Yet in a world of strong, large nation-states, if Germany had not consolidated, she would always have been at the mercy of other great powers, as she so often had been. In America today, the calls for splitting the country grow louder … but an America that is not strong and cohesive will be at the mercy of the People’s Republic China, which aims not only to supplant the United States as the world’s preeminent power, but to dominate and exploit it.

Perhaps in that sense a certain kind of nationalism is required, one that at least desires the survival not only of its polity, but its culture and people. But that provokes a deeper question: what polity, culture, and people? Germany, and especially post-war Germany, has chosen a secular and globalist option, which has brought it unprecedented material prosperity, but seems to be leading to its decline. Its birth rate is well below replacement level, it has imported millions of immigrants, and it is dangerously dependent on Russia for its energy. Secularization reduced differences between Germans, but it also vitiated the forces that had perpetuated it for two millennia. And its militarism backfired, cultivating a people deeply ashamed of their past and less willing to maintain a strident security posture.

Herein lies the irony: the very forces that brought Germany to unforeseen global prominence have been the same forces now directing it to irreversible decline. German Foreign Secretary Bernhard von Bülow in 1897 demanded “our own place in the sun.” Well they had it, but they are increasingly in the shade, as even Hoyer herself acknowledged in a recent op-ed in the Washington Post.

What then are we to take away from the story of imperial and modern Germany? Perhaps that as much as nationalism may be a necessary evil to repel foreign threats, it is one that must be carefully managed and circumscribed. It should be tied not only to a common identity based on a shared history, culture, and language, but a telos oriented towards a transcendent end, namely God. It should be focused on self-preservation rather than global dominance. And it should pursue domestic policies that protect and promote the family and local communities that sustain it. Only according to this vision will nationalism do any good in this century.