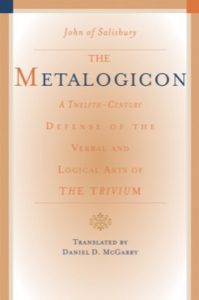 The Metalogicon: A Twelfth-Century Defense of the Verbal and Logical Arts of the Trivium
by John of Salisbury,
translated by Daniel McGarry
Paul Dry Books, 2009.
Paperback, 305 pages, $22.95.

In an age of relativism and scientific materialism, the idea of truth arrived at through the humanities is often dismissed as irrelevant. The idea of spending time reading books and considering the truths of the universe as one of the highest activities that mankind can partake in is considered a waste of time. John of Salisbury’s The Metalogicon shines a bright light on the need for the liberal arts as something human; something without which mankind cannot be fulfilled. If one desires to love wisdom, to be fully alive, and to be able to articulate the role of the humanities in such pursuits through wit and humor, read this humanist philosopher.

Early in the work John makes the case that “[t]he liberal arts are said to have become so efficacious among our ancestors, who studied them diligently, that they enabled them to comprehend everything they read, elevated their understanding to all things, and empowered them to cut through the knots of all problems possible of solution.” He continues in saying that “their object is to effect man’s liberation.” This undermines the modern mentality of freedom based on economic and material realities; freedom goes much deeper than mere things, and one of the most effective ways to partake in such interior and mental freedom is through the liberal arts.

A few aspects of this interior freedom are grammar, the ability to think, and the practice of virtue. John compares a lack of training in grammar to being deaf and dumb and states that “grammar prepares the mind to understand everything that can be taught in words.” This affords a freedom of knowledge for the individual to be able to “receive and impart” it with those we know, as well as within our own minds. Think here of the rules of language. The more we internalize the rules of any given language the “freer” we are to converse with others.

The second aspect is the ability to think logically and with clarity. The ability to think, or what John calls “philosophical inquiry,” has as its object the desire for wisdom, which he calls the most desirable of all things. Anyone hard-pressed in today’s culture can certainly lean on John’s perspective to push back against the notion of facts overriding wisdom. John states that in order to grow this ability, one should read, learn, mediate, and perform good works. This is of particular importance in defending the humanities against scientism as these practices are also the “basis and root” of scientific knowledge. John states that grammar implants the “seed” of virtue in nature’s furrow. In other words, the knowledge of grammar is the “cradle of all philosophy, and in a manner of speaking, the first nurse of the whole study of letters.” If one wanted to argue for the necessity of liberal learning against the overemphasis of science and math today, they would do well to present John’s argument of foundational necessity.

The third aspect mentioned is the particular ability of liberal learning to equip the conditions for the possibility of practicing virtue. John argues that liberal learning and possessing the gift of understanding leads to happiness and that “the truth will set us free, and will lead us from slavery to liberty, relieving us of the oppressive yoke of vice.” This is because “it is impossible that one who seeks and embraces the truth with his whole heart should remain a suitor and servant of vanity.” Any teacher worth his salt today would thoroughly understand the need for a virtuous student body, for the desire for learning and openness to new ideas increase with the practice of virtue.

John also provides examples of rowdy word usage for those who want to fight for the legitimacy and necessity of liberal learning. In an age when civility has been replaced by tolerance, we have lost some of the art of charitable debate. Though we may not want to imitate every style of pugilism employed by John, he provides a few witty pieces of banter that a good defender of the humanities ought to have ready in the chamber, the first being the colorful use of language.

For example, early in Book One, John is arguing for the necessity of each person to have at least a basic understanding of logic and philosophy. Understanding the necessity of a shared terminology and basis of rules for argumentation, he states that “[o]ne who fails to take cognizance of this, cannot philosophize any more easily than he could make a magpie that is parroting human words be equivalent to a man.” He then goes on to say that those who have been undermining the promotion of philosophy have only one concern: “Make money, by fair means, if possible, but otherwise in any way at all.” This little quip certainly applies in our scientific materialistic age. In making his case for the need to correct error, he continues in his colorful mode by saying that “those who are verbal jugglers of irrelevant nonsense must first be disabused of their erring ways before they can come to know anything.” Interestingly, though he certainly pulls no punches, a thread of charity pervades the text as he desires all mankind to enjoy the freedom provided by the liberal arts, something for the zealous advocate to always remember.

Early in the work, John describes Cornificius, a fictional name given to the individual against whom he is defending the arts. After lambasting the poor soul as one who has “bloated gluttony, puffed-up pride, obscene mouth, rapacious greed, irresponsible conduct, loathsome habits (which nauseate all about him), foul lust, dissipated appearance, evil life, and ill repute”—which he comically states he will not reveal because he is a Christian man—he also states that he will be “lenient to the person, without ceding any quarter to his error.” Though John probably has either a certain person or class in mind, he does remind his reader that though we can certainly use large and startling figures to dismantle our attacker’s inaccuracy, we must always remember charity for the person. In a rather ingenious way, John lists out numerous vices much like St. Paul did when speaking to his communities. By having such a range of potential vices John potentially implicates his own reader’s conscience prior to his defense of the arts as a pathway toward freedom from the very vices he names.

Though the witty call to freedom continues throughout the work, the last paragraph stunningly portrays the soul of this pugilist defender of the logical arts. In a remarkably poetic way, John asks his reader to pray to Christ for those whose minds and hearts are darkened and pleads with us to “intercede for me, a vain and miserable wretch, with the Virgin’s Son, Who is ‘the way, the truth, and the life.’ Let them pray that, dispelling the darkness of [my] ignorance, and uprooting [my] love of empty vanity, He [Christ] may enlighten me with His knowledge, and make me a zealous investigator, lover, and observer of the truth.” Read this work by a man of utmost talent, wit, and zeal if you also desire to defend the liberal arts in charity!

Jared Zimmerer is the Senior Director of Bishop Robert Barron’s Word on Fire Institute. He holds an M.A. in Theology from Holy Apostles College and Seminary and is pursuing a Ph.D. in Humanities from Faulkner University where he is currently writing his dissertation on the personalism of Russell Kirk. He resides in North Texas with his wife and six children.