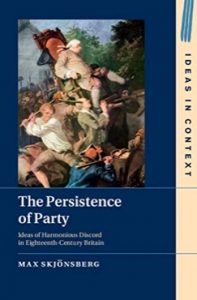 The “long” eighteenth century has proven to be one of the most fertile periods of study for students of political thought and constitutionalism. Britain’s remarkable stability offers one of the great historical examples of consensus gradually emerging out of civil tumult. And that consensus can reasonably be attributed to one of the great examples of mixed constitutionalism that history provides: the settlement of 1688–89.

As the British political system adjusted to this new world, one of the most pressing questions of political theory was that of party. The names “Whig” and “Tory” both began as terms of derision, and party was at one point widely considered to be merely another word for faction—a cabal looking to private interests and a potential threat to the stability and solidarity of the nation. By the end of the century, however, there was a perfectly respectable conception of party as a necessary or even healthy part of a well-functioning polity.

Tracing the development of party ideas is no simple task, however. The theorists of party were responding to, and often embedded in, the actual party politics of their day. And that context is complicated. The parties of the time and the power dynamics with which they wrestled were constantly in flux. There was no simple distinction between “red” and “blue” as in our time: there were parties within parties; parties that disintegrated upon losing power; parties whose identity fundamentally changed upon gaining power; parties that were systematically excluded from public life for decades; parties that centered almost exclusively on persons; even parties that claimed not to be parties.

In The Persistence of Party, Max Skjönsberg proves himself an outstanding guide through this fruitful but complex period, focusing on a “short” eighteenth century between 1714 and 1797. Party in the eighteenth century, he stipulates from the beginning, cannot be understood in our modern terms, thinking mostly about organizations. Rather, party “was usually thought of as a set of flexible and evolving principles, associated with names and traditions, which categorized and managed political actors, voters, and commentators.”

At the risk of simplification, I identified seven primary ways we might break down the party divisions as described by Skjönsberg.

First, there was the question of the legitimacy of government. On one end are the partisans of popular consent and on the other the adherents of divine right. Between them there were possible middle-grounds—for instance, those who saw government generally as an institute of God, but particular regimes as framed by and dependent on public opinion in some form.

Second, and perhaps derivatively, there was the question of the constitutional balance, with partisans of parliamentary power on one end, and defenders of the crown on the other.

Third, there was the religious element, which encompassed the question of church governance (presbyterians and episcopals) and matters of toleration and establishment.

Fourth, there was the succession: unreserved backers of the Hanoverians were on one end, and Jacobites on the other. It was this division more than any other that drove the persistent sense that party was essentially pernicious—that opposition entailed disloyalty. The association (sometimes correct, sometimes not) of Toryism with Jacobitism resulted in a proscription of Tories from public life for nearly fifty years.

Fifth was the matter of power: Who had it and who did not? On this spectrum arose the Court and Country parties, the latter of which operated against the notion that opposition was necessarily treasonous. Exclusion from power, moreover, engendered certain Country Party principles, such as opposition to taxation and war, and a laser-focus on perceived government corruption.

Sixth are the particular individuals (often of the aristocratic classes) who cultivated personal loyalty. In the world of political theory, Lord Rockingham is perhaps the most important example, possessing the loyalty of Edmund Burke and thereby inspiring his defense of party in Thoughts on the Cause of the Present Discontents. We might also include under this heading the related but distinct phenomenon of “popularity”—exemplified by figures like Pitt the Younger who cultivated personal favor with the public.

Overlaid above these six, then, are the two great party names: Whig and Tory. It may be tautological to say that names are merely nominal, but it is particularly worth saying here. For Skjönsberg shows that the meaning of these names was a constant source of debate, with Whigs and Tories defining themselves and their opponents in various ways along the fault lines just mentioned. Indeed, one can hardly come away from the book without the distinct sense that identifying any eighteenth-century figure as a “Whig” or a “Tory” is largely meaningless without significant qualifications and explanations.

Moreover, the political dynamics of the times often conspired to put together seemingly opposing commitments. To take just one example of many, the Tories had historically been the party of royal power, and saw a divine origin of government. But their association with Jacobitism and proscription led them to embrace the Country Party skepticism of power and insist on court limits.

Skjönsberg shows not only how these various elements of political attachment cohered, collapsed, and evolved over the course of the century, but also how theorists tried to make sense of it. He particularly focuses on Paul de Rapin-Thoyras (a French Huguenot who came to England with William of Orange and wrote an influential history of Whigs and Tories), Bolingbroke, David Hume, John Brown, Adam Smith, and Edmund Burke.

The breadth and depth of this study cannot be sufficiently relayed in a review of this type. Skjönsberg makes many notable contributions that may significantly change how one understands the development of party ideas. He forcefully challenges the common belief that Burke was a sudden pivot point in the understanding of party, insisting that the half-century prior had paved the way for a more positive conception with thinkers like Rapin, Hume, and even Bolingbroke (who is often understood as a thoroughgoing critic of party).

Indeed, of the thinkers surveyed, only John Brown, writing at a time of party upheaval following the ascension of George III, offers a complete rejection of party. Possibly influenced by Rousseau, Brown sought a society in which “Manners and Principles, all point to the same End, the Strength and Duration of the State.”

Against this view, Skjönsberg argues that theories of party gravitated toward the idea of “harmonious discord”—that conflicting parties will not necessarily undermine the common good, but can actually offer as close an approximation of it as can be expected when operating in a functional constitutional order.

Burke stressed a kind of unity, but one of a very different sort. Party unity served as an alternative to corruption or popularity as the position of strength from which political figures could promote the common good. Without the bond of party loyalty, Burke argued, individual actors would be helpless and ultimately seek influence at Court—or even worse, in demagoguery. As Skjönsberg explains, Burke saw the court and the popular element of the constitution—and especially the combination of the two—as the primary threats to constitutional balance. His conception of party, therefore, had an aristocratic character to it, but only because it was the aristocratic element of the constitution that stood in the middle between the two dangerous extremes. From the solid foundation of aristocratic connection, he believed, government could engage with the people and with the court without becoming their tool. It held the balance of the mixed constitutional order.

Burke’s position, though, was not simply one of “men” over “measures.” He saw party connection as solidifying a commitment to certain constitutional principles. On this point, Burke’s relation to David Hume becomes interesting. As Skjönsberg notes, Hume would have been skeptical of the hope Burke articulated in Present Discontents that those with the right constitutional principles can come to power and consciously defend the constitutional balance (“when bad men combine, the good must associate …”).

Not a party man himself, Hume had identified parties of principle as the least desirable and most dangerous form (though he had a more ideological sense of “principle” in mind than what Burke meant). Party spirit, especially when centered around religious belief or definite theories about government legitimacy, threatened to unsettle the constitutional balance that maintained civil peace, but which rarely reflected theoretical purity on such dogmatics. Hume believed the Court and Country parties were “mixed parties,” influenced both by principle and by interests rooted in the constitutional structure itself. As such, they could serve as highly imperfect weights by which the constitution might be balanced. Opposed to the teleocratic vision of Brown, to “mythical lawgivers,” and to social contract theory, Hume represented a skeptical and historical approach to politics which saw political order emerging as an unintended consequence of the dialectic of disconnected and often opposing forces.

After Burke broke from the Foxite Whigs, he sounded a much more Humean note in his Appeal from the New to the Old Whigs: “The whole scheme of our mixed constitution is to prevent any one of its principles from being carried as far, as taken by itself, and theoretically, it would go.” A “prescriptive government such as ours,” as he said elsewhere, was not planned by those with good intentions, but grew out of experience. Whether party was a necessary evil or positive good, it was clear that both men saw it as a key vehicle by which the theoretical balance of the constitution was made into a reality.

The Persistence of Party is generous in context, embedding every theorist in his political, intellectual, and partisan situation. But it does not thereby attempt to historicize away the ideas. Indeed, one of the undercurrents of the book is that theory is enriched by the intellectual engagement with the history that was unfolding. Any student of constitutionalism will benefit from this thorough treatment of a rich period of political history.