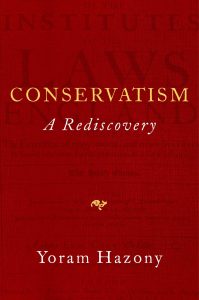 In the introduction to The Conservative Mind, Russell Kirk defended his choice of Burke as the originator of modern conservatism: “If one attempts to trace conservative ideas back to an earlier time in Britain, soon he is enmeshed in Whiggery, Toryism, and intellectual antiquarianism; for the modern issues, though earlier taking substance, were not yet distinct.”

Yoram Hazony’s new Conservatism: A Rediscovery looks for the origin of conservatism as far back as the fifteenth century, and finds its best exponent—the jurist John Selden—in the seventeenth. There is plenty in Hazony’s book that any conservative should approve of: his criticism of rationalist theories that make a priori demands on the political order, his appreciation for history and tradition, his aversion to raw individualism, his recognition that political orders vary according to the characteristics of society, and his sense that national governance requires a balance among the various groups that constitute any given society.

Such principles are praiseworthy and have served as the firm foundation of the conservative understanding of politics at least since Kirk expounded on similar themes. To the extent that they need to be rejuvenated in the face of neoconservatism, creedal nationalism, or alt-right identity movements, Hazony’s book is all to the good. And his exhortation for readers to choose to live a conservative life and build conservative communities around them is wholly laudable.

But the political edifice he builds on this foundation is different from and inferior to that of Kirk and other twentieth-century conservatives. It offers a romanticized understanding of national politics that, if it existed in the seventeenth century, certainly does not today. As Kirk predicted, Hazony’s conservatism, despite building around a parliamentarian (Selden) and a Whig (Burke), has an Old Tory character to it: Strictly hierarchical, it sees politics as growing out of and mimicking a patriarchal social system. It seeks social unity above all else, and especially emphasizes the need for religious uniformity. While it is not absolutist, it is centered around the person of the chief executive, placing faith in the ability of personal loyalties and public honor to redirect society in healthy directions. Such a view fails to grapple with the forces at work in modern, mass democracy, and consequently looks to one of the great destroyers of conservative community—nationalism—for cultural salvation.

We should start where Hazony starts: Anglo-American history. Hazony reiterates time and again that his vision of politics is empirical. The conservative does not look to a priori principles as his guide, but to the concrete experience of a particular political community. This is, indeed, a key conservative premise. Such a position, however, puts a serious obligation on the political theorist: he must approach history honestly. If the conservative truly seeks to take his political bearings from history, he cannot tell morality tales or offer a cherry-picked history designed to match some preconceived outcome. Unfortunately, that is what Hazony’s history seems to do.

The English and American history he presents (co-written by Ofir Haivry) is carefully curated to support his particular vision of a hierarchical and unified politics ordered around personal loyalty to national leaders. Where historical trends point in other directions, he offers mostly silence, or an unexamined dismissal.

There are some problems with Hazony’s assessment of English history, most notably a diminishment of the Glorious Revolution’s aftereffects and the shifting of the constitutional balance away from the person of the monarch and toward the legislature. But I will focus on his depiction of early America. Here, he makes a clean and definitive distinction between “conservative” Federalists on the one hand and “rationalist liberal” Jeffersonians on the other. He presents any critics of national power as the equivalent of French Jacobins, fighting for atomistic liberal individualism.

In his description of early American history, therefore, he ignores or dismisses anything that challenges the nationalist interpretation. He does not discuss the constitutional question of colonial self-government that prompted the Revolution. He cites Jefferson’s Declaration as an example of rationalism, but does not discuss Jefferson’s “Summary View” or the latter half of the Declaration, both of which made the case for independence on the basis of prescribed rights. He glowingly cites Hamilton’s convention speech calling for an elected monarch and life peers in imitation of Britain, but does not mention how utterly inconsequential it was in Philadelphia. He claims the nationalists dominated the Philadelphia convention, but fails to mention how disappointed they were with the Constitution it produced. He acknowledges that the vast majority of the people did not want a national government in 1789 such that Federalists dared not even use the word “national” to describe it, but he nevertheless declares that the Constitution “established a unified nation.”

On these and other points, Kirk’s Conservative Mind does a far better job of capturing the nuances of American history as they relate to conservative thought. While Federalists tended to espouse more conservative political theories, they were often tempted in un-conservative directions, Hamilton being the most obvious case, with his contemptuous attitude toward local attachments and systematic plan to transform an agrarian society into an industrial powerhouse by pulling the right levers of government. Conversely, Kirk observes, Jefferson’s “doctrines always were more radical than his practice.” Indeed, despite the rationalistic philosophy, Kirk saw that in his insistence on local self-government, his agrarianism, and his appreciation for prescribed rights, Jefferson “had half a mind to be a conservative—and sometimes more than half a mind for it.”

What is true of Jefferson is even more true of those who came to be seen as his followers—Anti-Federalists and Democratic-Republicans that looked to history, tradition, and established law far more than Jefferson’s abstract theories to defend local prerogatives and limit the national government.

Such nuances reveal that much of the debate in the early republic was not a question of “British tradition” versus “rationalist liberalism,” as Hazony suggests, but a question of how exactly the British tradition translated in America. The Federalists tended to see the English Constitution as a model to adopt wholesale, as if a consolidated America were a new England, while Jeffersonians filtered the British inheritance through America’s particular colonial experience, seeking to maintain the tradition of colonial/state home rule paired with a limited central government tasked with international trade and military policy. Conservative assumptions, by this approach, lead us to localism, not nationalism.

As the book moves into more conceptual territory, we can see why Hazony has an underlying, though not enthusiastic, preference for a more centralized model of political authority. I doubt he would see himself as a conscious “centralizer,” but he is certainly comfortable with it. National political rule, as he presents it, is not fundamentally different from the rule of a parent over a family, or that of a priest or rabbi over his congregation. Leaders of the nation must primarily consider it as a “collective,” attending to its strength, internal loyalty, and decisiveness, while creating a government of “weight and significance.”

One part of the nation—“the strongest class or group”—inevitably “dominates the state” and rules over the others, imposing its views on the whole. Its influence is determinative: “Whatever government does not honor is weakened by this neglect.” Therefore cultural regeneration, he says, ought to come first and foremost from “kings, presidents, and prime ministers.” Only when they fail must we fall back on “the leadership of political and religious factions,” and eventually, as a last resort, “congregations and families.” When he lays out his vision of “conservative democracy,” he offers a simple path for attaining it: X (religious belief, family norms, political traditions, etc…) “should be embraced and encouraged by the national leadership.”

Hazony’s heart does not burn for centralized control. He always pairs his insistence on cultural and religious uniformity with toleration of minorities. He stresses that national leaders must respect a degree of individual freedom, and must balance the needs and the “honor” of the various sub-groups that exist within the nation. He even describes the nation as having “no existence except as an alliance of tribes or factions tied to one another by bonds of mutual loyalty.” But this critical work of maintaining balance within the political system is merely entrusted to the discretion of “the leading figures of the nation.”

Hazony’s depiction of and reliance on this prospective conservative “national leadership” puts one in mind of Bolingbroke’s “patriot king” who was to “govern like the father of his people.” A free people “is that of a patriarchal family, where the head and all the members are united by one common interest, and animated by one common spirit.”

National loyalty, for Hazony, emerges from personal loyalty among the leading men in a society: “Frequently it is only the leading figures of the nation who have the standing to bring the respective factions together and to induce them to honor one another.” The unstated assumption seems to be that the “leading figures of the nation” are above the fray—or at least able to transcend their interests. But this is little more than a facade cultivated by those national leaders themselves. Bolingbroke’s patriot king was only thought possible because he would be isolated from the political forces at work in Parliament. Hamilton’s (and Hazony’s) belief in a noble president who would be above it all was, as Kirk observed, quite outdated even in 1787: “something very like old Toryism.”

A certain variety inevitably attends political life in a sprawling, continental country of over three hundred million souls. Hazony should consider more carefully whether, given this reality, the centralization, unification, and personalization of political authority might inherently undermine the very conservative ends that he values.

National governance in the modern world is utterly disconnected from the daily lives and practices of real communities. It inevitably relies on a sprawling and insulated administrative state, undermining traditions and making the kind of instinctive personal trust and reliance to which Hazony appeals almost impossible. It is a more comprehensive authority and, as Hazony emphasizes, it is a place of honor and influence. But these characteristics make it a magnet for ambitious, corrupt, and frankly disturbed personalities. The incentives of modern mass democracy do not produce wise and disinterested fathers of their people. They select for demagogues, flatterers, and sociopaths.

Moreover, when national leaders think of the nation as a “collective,” and attend to its strength, firmness, and decisiveness as Hazony describes, they inevitably come to see local community, customs, and habits as hindrances that must be abandoned or redirected for the good of the nation. And empowered national governments on the scope of the United States will always respond to democratic incentives by gobbling up the responsibilities of families, congregations, and communities, making them seem pointless. Hazony blames liberalism for the moribund state of these institutions. Nationalism allied with individualism is a far more likely culprit.

We should certainly appreciate, value, and conserve the commonalities we really do have—but not through a national government consciously promoting unity, especially in areas in which it does not actually exist. Hazony’s conservative culture is attractive. But if anything resembling it is possible in the twenty-first century, it will come from revitalized local attachments that are seen as strong and responsible sources of authority—not from a romanticized national government.