Navigating the “In Between” of Belief 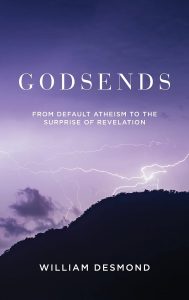 Godsends: From Default Atheism to the Surprise of Revelation
By William Desmond.
University of Notre Dame Press, 2021.
Hardcover, 326 pages, $65.00.

Metaxu is likely not a word in the lexicon of many seasoned philosophers, let alone in that of the average reader. Yet William Desmond places this concept at the center of his recent work Godsends: From Default Atheism to the Surprise of Revelation. In seeking to explain and challenge the default atheism of our times, Desmond looks to what he describes as the “metaxological” realm of the “in between” to offer a new perspective. Putting thinkers from Augustine and Aquinas to Hegel and Kant into intense dialogue, Desmond takes the reader through a dramatic and at times dizzying reframing of the often seemingly deadlocked debate for and against belief.

So what is the metaxu? For those with no prior experience of Desmond’s work, the answer will not immediately be made clear. While a detailed introduction outlines his project and its trajectory, it quickly becomes apparent that Desmond embraces a much broader range of neologisms that are intertwined and all serve as foundational pillars for his conceptual framework. The book, compiled in part from a number of reworked essays, therefore draws the reader gradually into his way of thinking in snapshot chapters which are linked by the guiding thread offered in the introduction.

Even at book’s end it can be difficult to pin down many of these concepts, and yet this is not exactly a criticism. In fact, the concept of the metaxu, sketched as an “in between” realm, perhaps accurately encapsulates the impression one is meant to receive in passing from section to section. The reader is drawn out of his predetermined categories to think in an “in between.” He engages with fundamental realities that evade being pinned down on either side of a duality, whether it be faith and reason, theology and philosophy, or the natural and supernatural. Desmond writes, “The metaxological allows us to recur to the rich ambiguities of the middle.” Thus his stated goal is to follow the itinerary of St. Augustine, using his quote—“from the exterior to the interior, from the inferior to the superior” (Enarratio in Psalmum 145.5)—to structure that oscillating movement in and out, up and down, around the metaxological middle.

The adventure of this work, then, is in stepping away from any preconceived notions and reflecting on the human experience in a new way. Upon doing so, Desmond offers many incisive and rich critiques of an atheistic contemporary world as well as of static and insufficient presentations of religious belief, all from within his particular conceptual framework. For example, he speaks provocatively of the “secret euthanasia” of religion, of the exaltation of autonomy and the view of religion as “submission to God as the ‘big Other,’” of peace being replaced with the “seductive counterfeits of hyperactivity,” and he describes vividly “solitudes of immanence, within which we build technological wildernesses, masquerading under the name of networks of communication” producing “nothing but busy nihilist solitude.”

Desmond’s focus resonates with Charles Taylor’s concept of the buffered self, describing man today as closed off to that which is transcendent. Subject to default atheism, humanity is blind to the “hyperbolic” elements that are found in the metaxu and which should surprise him out of his immanent worldview. In response, Desmod offers the antidote in a revival of “porosity,” whereby we open ourselves again to encountering the inexplicable and “overdetermined” divine “godsends.” He proceeds then both to critique how modern thought closes us to the supernatural and to offer insight into where we can encounter such godsends.

Those comfortable in a more traditional conceptual world will then begin to see meaningful parallels. For example, Desmond points to four “hyperbolic” realities that bring us to the threshold of the metaxu and should facilitate that sense of surprise and openness to the transcendent: the idiocy of being; the aesthetics of happening; the erotics of selving; and the agapeics of communication. While that terminology may be challenging, these four realities could more or less reasonably be translated as: the sheer given-ness of finite being and the incredible fact that things exist at all; the gift of our fleshly existence that is determined and yet indeterminate in so many ways; our ability as finite creatures to be infinitely self-surpassing; and the ability to give and receive generously. Once one enters into his way of thinking, and is able to connect what he is describing in a specialized vocabulary with one’s own experience, it becomes possible to begin to reap the fruit of his sweeping vision.

It is nevertheless difficult to evaluate Desmond’s contribution, as it is a work that in its essence defies categories. He describes his approach as allowing “reflection on the togetherness of being religious and philosophical in a living sense, rather than on boundary questions between philosophy and theology in an academic sense.” From chapter to chapter he passes from a fairly sophisticated exploration of Hegelian dialectics to, at least in part, a more conventional exploration of St. Thomas Aquinas on the Beatitudes. Even in style, the reader finds himself in a fluid “in between.” Each chapter begins with a poetic element, and references are made to Dante and Shakespeare. One chapter in particular takes the form of extended monologues, each a variation on the theme of the Prodigal Son, set to the tunes of Kant, Hegel, Marx, and Nietzsche, expressing themselves as if they were a character of the story.

His work, however, is perhaps best summarized in its conclusion, where Desmond offers a simple and clear evaluation of the dangers of most modern thought which are deprived of any godsends or the ability to encounter the transcendent. He describes how we end up projecting ourselves out into the universe, and there is no Other to return the message, only ourselves, and “when our first divine intoxication with ourselves as gods wears off, the nothing sends us to ourselves, and we come home to ourselves more brutally as nothing. We come home to ourselves as having no home.” It is rather when we are porous and open that we discover the divine in the many gaps of the frame of existence, in the metaxu.

With a challengingly idiosyncratic conceptual framework, the fluctuation in styles, the seemingly scattered approach to that fundamental question of belief in our world, Godsends can leave its reader unsettled and seeking to organize its conclusions in conventional categories. And yet while so many of these conclusions seem to evade such simple classification, perhaps being stuck in such an “in between” is exactly what the author intends.

Rev. Joseph Scolaro is a doctoral student in theology at the Pontifical University of St. Thomas Aquinas in Rome.