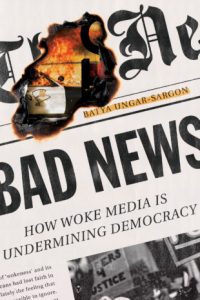 Do you remember a book by Thomas Frank published not too many years ago?  Its unusual title was borrowed from a youthful William Allen White.  In 1896 the Emporia, Kansas, newspaper editor penned an editorial that asked “What’s the Matter with Kansas?”  In it, he questioned the intelligence of his fellow Kansans who had fallen for the “free silver” panacea of their Nebraska neighbor, William Jennings Bryan.

Better than a century later another Kansan, Mr. Frank, wrote an entire book that asked the same question: What’s the Matter with Kansas?  In it, Frank frankly questioned the intelligence of his fellow Kansans, whom he thought had allowed themselves to be hoodwinked into voting against their economic interests by consistently voting Republican.

Unlike White and Frank, Ungar-Sargon is not a Kansan.  Like White, the budding progressive, and Frank, the latter day progressive, she is a woman of the left.  Nonetheless, her book is in many respects a direct answer to Frank, perhaps even a very direct repudiation of Frank.

While White is never her target, Ungar-Sargon does devote a few preliminary chapters to the history of the American newspaper business during the course of the nineteenth century.  Specifically, she dwells on the rise of the penny press, which sought to appeal to working class readers in urban America.  More specifically, she applauds Joseph Pulitzer, first of the St. Louis Post-Dispatch and later of the New York World, and his great success at getting newspapers into the hands of those working class readers.

This business model, she adds in a subsequent chapter, was not exactly that of the New York Times, which even in the nineteenth century offered a preview of what she deems to be the “bad news” of our time.

Bad news?  The title has nothing to do with ancient or modern stories of such things as domestic violence, car crashes, or petty thievery.  Instead, it has everything to do with “all the news that’s fit to print” for upscale readers.  That was the Times’ goal initially, and it remains that newspaper’s target audience today.

But with this significant difference: Ungar-Sargon’s real target, her particularly troubling bad news, is why and how today’s upscale readers are targeted.  The worst of this bad news is the major media’s preoccupation with racial issues, racial differences, and racial animosities, which has led them to ignore class differences and what she presumes would be class animosities, assuming that they were properly presented by a media interested in exposing them.

Encounter Books has clearly taken a gamble here.  Having established a stellar reputation for publishing first-rate conservative books, it has brought forth a volume that might make the pre-woke Bernie Sanders proud.  Ungar-Sargon’s argument is that class, not race, is the great American divide—and perhaps even America’s true original sin, especially since she contends that the long-standing American class divisions have been at once “impenetrable and devastating.”

At the heart of “wokeness,” she argues, is the white liberal preoccupation with race.  Furthermore, this mistaken preoccupation has provided both an “alibi” and a “perfect ideology” for affluent white liberals.  She might have added guilt-ridden white liberals, but for some mysterious reason she did not.

Mistaken?  Here Ungar-Sargon takes a left-liberal swipe at the woke left, as she correctly contends that America is “radically less racist than it once was.”  Moreover the radical rejection of a racist past began decades ago—and not just in the aftermath of, say, George Floyd’s death.  Here she might have added that what she calls the “re-racializing” of America is itself a form of racism, nay a dangerous current form of racism, but she does not.

By her own definition, her book is a “populist critique of American journalism from the left.”  At the same time she wants it to be clear that hers is not a pro-Trump book.  However, she does concede that Trump “filled a vacuum” with his “politically incorrect economic populism.”

That vacuum was largely created by a post-1960s Democratic party that has long been in the process of jettisoning and abandoning working class voters.  That very process has been aided and abetted by many forces, not the least of which is the “bad news” that is the daily product of the vast majority of the major media.

Similar books could well be written about similar aiding and abetting roles played by education, entertainment and the tech oligarchy.  But the print media story is Ungar-Sargon’s beat—and concern.  An occupation that once was heavily dominated by ordinary working stiffs has itself become just another home for the college-educated (meaning well-credentialed) elite.

As Ungar-Sargon puts it, a Wall Street banker and a college professor have more in common with one another than either has with a truck driver.  She might have added newspaper reporter or editorialist to her bankers and professors, but she did not.  Her point stands nonetheless.

A Ph.D. herself, Ungar-Sargon is far from enamored of the role that colleges have played in transforming American newsrooms.  More than that, she finds the prospect of free college to be a nightmare.  It certainly is not a “pathway to a strong working class.”  If anything, it is a “fantasy in which there is no working class.”

Sounding almost Trumpian and/or at least pre-woke Sandersian, she contends that such policies as student loan forgiveness and open borders may “flatter the vanity of affluent liberals,” as well as “masquerade as social justice.”  But all they will really do is “further burden the United States.”

Frank claimed that Fox News, Rush Limbaugh, and other favored villains of the left turned working class voters into conservatives.  Ungar-Sargon strongly disagrees.  Those villains simply “served” such voters, namely voters who had long since been abandoned by the liberal media.

Much of this book is devoted to providing reasons for, as well as examples of, that abandonment.  Chief among the reasons is the status revolution that has taken place in the news business.

That revolution should not necessarily have led to a campaign to “re-racialize all of American life.”  But it has, thanks in no small measure to the “bad news” press and the “moral panic” that it has helped promote.

Ungar-Sargon clearly makes an important and valid point here.  In doing so, she rightly avoids conspiracy theories, but she mistakenly downplays the very real phenomenon of white guilt.  Along the way, she seems to be offering a unique explanation for a very old and very American phenomenon, namely a desire to avoid dealing with class issues and class differences.

Finally, Ungar-Sargon also shies away from concluding that either a Trump or post-Trump Republican party will be—or ought to be—the champion of the American working class.  At this historical moment she sees a “party of the rich” (Republican) and a “party of the educated” (Democrat), while worrying that such “concentrations of power will doom us all.”

In the end she wants to hang on to a glimmer of hope that those on the American left will somehow decide to “abandon (their) penchant for closing (themselves) off to those who disagree with them.”  Having not closed herself off to those who disagree with her, perhaps there is also a glimmer of hope that Ms. Ungar-Sargon will someday learn a few things from those same conservative working class voices.

More than that, she might learn that California has become a state of the very rich and the very poor, a state with a declining middle class and a declining working class, and all thanks to policies of the left that controls California.  Lastly, she (and Thomas Frank) might learn that the working class in Kansas and elsewhere actually has been voting its economic interests, and not just its socially conservative preferences, when it has been voting against parties and policies that favor open borders (meaning lower wages) and shipping jobs overseas (meaning no wages).

In the meantime, good luck with your glimmer of hope, Ms. Ungar-Sargon.  At this historical moment the party that once prided itself on being the party of the working class, the party that in my home state of Minnesota still bills itself as the DFL (as in Democratic Farmer-Labor party), is not just determined to re-racialize us, but also seems bent on demonizing the white working class that was once its reason for being.