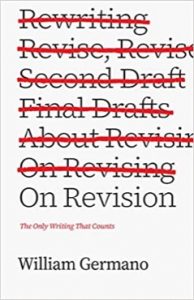 On Revision: The Only Writing That Counts
by William Germano.
University of Chicago Press, 2021.
Paperback, 208 pages, $20.

William Germano, a seasoned teacher and writer who has served as editor-in-chief at Columbia University Press and professor of English literature at the Cooper Union, aims this book primarily at authors of academic prose: essays, articles, and monographs. No book of this kind—and there are many, probably including a dozen sitting on your bookshelf—can substitute for a writing coach working directly, in person, with an author.

And yet Germano’s guide—which has to do with considerably more than revising written work—contains much of value, even for those of us who have been in the game for many years. Indeed, he makes a number of arresting comments—albeit in the midst of what could have been a shorter book.

Some of his points are simple but necessary: with his students he works on reading and thinking and writing in interaction with one another. As a beginning instructor in the humanities, I thought that my students did not write well because they did not write well. Consequently, I advised them on their prose style: grammar, punctuation, coherence, cogency. Then I realized that they did not write well because they did not think well. Finally, I grasped that they were not thinking well because they were not reading accurately and attentively and imaginatively. Instead of merely complaining about poorly prepared undergraduates, a thoughtful instructor will adjust to these realities, connecting with his or her students where they are. If college freshmen do not read well, then exercises in writing abstracts of assigned passages could well be the place to begin.

Germano is especially thoughtful on the structure and pacing of good scholarly writing. The most effective persuasion occurs when the reader is caught up, gradually, in the author’s argument. Therefore the best approach is not to deliver the entire conclusion at the outset and then do nothing in the next thirty pages but backfill with examples and evidence. Rather, develop and support your argument piece by piece.

In this way, the writer draws in the reader as a fellow participant in this adventure, the search for answers. Indeed, Germano’s best point about architecture and engagement goes deeper: scholars “are people looking for trouble.” Writing and thinking are difficult for scholars—but this situation, he says, is the way they like it. “Scholars live with (in, amid, for) difficulty because that’s where thinking, and writing about thinking, is going to happen.” That is also where the mind of the patient writer meets the mind of the active reader.

Hence a narrative approach to developing an author’s meaning is necessary in order to attract and hold the interest of well-educated, intellectually demanding, and curious readers. This effort of discovery and argument—thinking through problems with readers—is what distinguishes first-rate scholarly writing from conventional prose. For academics, “argument and narrative are twinned. Good writing is driven by narrative, and good academic writers do more than describe and explain, page by page.” Exactly.

Like Germano, I have found that teaching and writing go together and reinforce one another, sometimes in surprising ways. Scholars, he says, are “trained to notice things.” What these professionals have in common is “a capacity for sustained, responsible attention, even to the most minor things, informed by evidence …” They share “a desire to teach. Good scholarly writing isn’t just thinking. It’s teaching, too. A good kind of problem, then, is a problem that makes teaching possible.”

Germano speaks from experience. A highly useful bit of advice is to “try to find the smallest unit of real importance—it might be the key document, the simplest formulation of a theory, the most concise and elegant question—and put it somewhere where it will always be close to the front of your mind.” If your own essay or a student’s paper or a colleague’s chapter does not seem to make sense, then ask this question: What exactly—within all this clutter of language, pieces of supporting evidence, and (sometimes) potted histories—is the small but real nugget of gold here? What precisely is the spark, which Germano designates “the generative insight”? If it can be found or described, then you are on your way to a resolution, one way or the other.

While offering much that is worthwhile, this book is not without its flaws. Most of the footnotes could be eliminated to no ill effect. Many paragraphs could be shortened to a single sentence each. A better copy editor would have caught all typographical errors, such as “you’re” when the author meant “your.” Style could be improved: I would have put words such as “only” closer to the word modified. Some sentences are clunky—for example, this one about smooth language: “[O]ne of the ways [language] moves smoothly is because it has just a bit more verbiage in it than might be absolutely required.”

As a practical, highly readable guide, William Zinsser’s On Writing Well (30th anniversary edition, 2006) is still the best, certainly for undergraduates as well as for many postgraduate students. And as an erudite, thoroughly distinctive book on crafting excellent prose, Style: The Art of Writing Well (1955; 2012), by the Cambridge University scholar F. L. Lucas, is unsurpassed and likely unsurpassable. Not only does Lucas supply a wealth of examples, he also understands the ethical aspects of good writing.

Writers produce work that is moral in both its initiation and its accomplishment—first of all by taking into account the reader’s vantage point. Underscoring this point, Lucas employs a thought-provoking verb when he says that an author achieves clarity “mainly by taking trouble; and by writing to serve people rather than to impress them” (emphasis added). At the same time, he cautions writers to maintain their dignity; do not kowtow to readers. He affirms that “the author of character will not bow too much to the character of his audience. Courtesy is better than deference.”

An “author of character”: as Russell Kirk knew, the roots of American order lie not only in texts and politics but also in virtue. Some secondary schools today—especially classical Christian academies—are going beyond teaching writing as an isolated scholastic discipline and are examining the relationship of rhetoric to true belief and right conduct. More schools and colleges could examine writing as a moral act. Unfortunately, if you seek good material on “writing and ethics” on the Internet, you will find many sources on inclusive language and on avoiding the charge of plagiarism but almost nothing on the virtues.

As both Germano and Lucas would probably agree, however, good writing means not only considering one’s subject from the point of view of the reader; it also requires taking to heart and enacting essential traits of character: temperance, hope, love, faith, fortitude, justice, and others. Writerly integrity requires a moral vision more comprehensive than the restricted prudence of avoiding plagiarism and punishment.

Lucas is particularly good on this point. A writer’s integrity is revealed in several ways. She does not dissemble. She fairly describes both her own views and those of others. Lucas says a writer should never “write a line without considering whether it is really true, whether you have not exaggerated your statement, or its evidence.” In addition, the work a writer claims to be his own should actually be by him, not by someone else.

Books on writing are helpful resources. Texts such as Germano’s, which carefully consider the reason and drive behind first-rate scholarship (scholars “look for trouble”), are certainly beneficial. But we’ve reached a point in our culture at which we must return to foundations. Not only narrative but also a moral (not a moralistic) sense should infuse sound writing. This ethical commitment should begin with the principles of permanent worth, grounded in the seven theological and classical virtues, together with the widely discredited or overlooked moral habits of humility, patience, and gratitude. Even writing manuals, then, can prompt us to transcend artificial disciplinary boundaries for the sake of recovering the human and the humane.

David Hein is a senior fellow at the George C. Marshall Foundation and an affiliated scholar of the John Jay Institute. He is the author of more than seventy articles in Touchstone, the Journal of Military History, Modern Age, the New Criterion, the Journal of Ecclesiastical History, Theology, Army magazine, the Christian Century, Cross Currents, the Anglican Theological Review, and other periodicals. His publications also include ten books; most recently, he is coauthor with Andrew Chandler of Archbishop Fisher, 1945–1961: Church, State and World (The Archbishops of Canterbury series; Routledge).