Only the Lover Writes 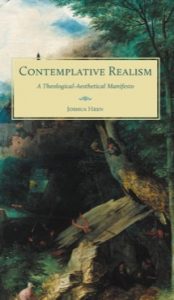 Transcontinental voyages provide fecund soil for the seeds of self-reflection. On one such journey, returning to Europe from North America, the twentieth-century Thomist philosopher Josef Pieper composed a short treatise, “Learning How to See Again.” Pieper observed that “man’s ability to see is in decline.” The contemporary person lacks the inner sight and “spiritual capacity to perceive the visible reality as it truly is” due to blindness caused by the “visual noise” of modern entertainment. Pieper warned that “the restoration of man’s inner eyes can hardly be expected in this day and age—unless, first of all, one were willing and determined simply to exclude from one’s realm of life all those inane and contrived but titillating illusions incessantly generated by the entertainment industry.”

Two weeks ago, seventy years after Pieper’s trip, I took an intercontinental flight back to Europe from America; I held in tow Joshua Hren’s new essay, Contemplative Realism. A gentleman around my own age—on the cusp between millennial and Gen-Z—sat next to me and, seeing that I was reading “a theological-aesthetical manifesto,” struck up a conversation. After an initial attempt to convince me of socialism’s viability as a substitute for religion, my companion outlined, over the course of several hours, his philosophy. Although he bucked classifying his beliefs as any “-ism,” he told me he believed in the total subjectivity of morality, that matter was all there is in the universe, that environment and genetics entirely determined a person’s actions, and there is no dignity inherent to human personhood.

When I contended that suicide is the logical conclusion of this line of thinking, the stranger disagreed. He maintained that, while there was no intrinsic superiority to being alive over being dead, being alive was at least entertaining. Though we can truly choose nothing for ourselves, we can still hope that the next situation we are determined to participate in by nature, nurture, and the mechanistic material processes of the universe will be amusing. According to the anthropology of this nihilist in the exit row, human beings at their core are nothing more than passive observers, trapped inside lives we cannot control, with the universe as our unmerciful, unrelenting entertainment industry. There is neither good nor evil, neither beauty nor ugliness, only entertaining and not entertaining.

My oracular neighbor told me he had discerned these facts thanks to his abnormally high empathy (though he never asked me what I believed), which enabled him to see—without naïve moralizing—both sides of any conflict. The only way to pass judgment on the actions of a rapist, a pedophile, a terrorist, or a genocidal dictator is to determine whether these figures were entertained when they acted. This is what made art, in his eyes, worthless. No painting, symphony, or novel could ever compare to the stimulation of being, embodied externally but trapped internally, in the midst of an action.

My interlocutor had revealed our modern world as it really is; he had laid bare the assumptions about being and the universe that underpin our current cultural moment. The world he described was one in which reality, our fellow human beings, our love, and ourselves are reduced to totalizing visual noise. This is not just a world where man’s ability to truly see reality is in decline, but instead one in which man does not know that he can see, or that there is anything to see. Objects and subjects collapse into a homogenous mush. Reality is only good insofar as it amuses us, the passive entertained observers, but we ourselves are in every sense good for nothing.

Joshua Hren steps into what he calls this “raging post-truth unreality” with his articulation of contemplative realism. Hren wears his debt to Pieper on his sleeve: in addition to his quotations of the philosopher throughout, Hren’s arguments fill a lacuna in Pieper’s thought. Though Pieper commented extensively on the connection of the visual and auditory arts with contemplation, which is the true sight he argued was in decline, he did not remark on how good literature achieves art’s aims, namely “not so much to copy reality as to capture the archetypes of all that is. [True art] does not want to depict what everybody already sees but to make visible what not everybody sees.”

Hren takes up this task with twofold purpose. First, Hren’s essay seeks to outline the roots of what he calls contemplative realism, a type of literature in which we, as in liturgy, “suffer and praise with the whole of creation; the prose cultivates a grateful disposition, prompting us to yearn for a vision of the whole.” To describe what a contemplative realist looks like, Hren traces the “genealogical metamorphoses” of literary realism, marking out the edges of a field of examples that stretches from Austen to Zadie Smith, with a temporal breadth that spans from Plato, Pontius Pilate, and St. Augustine to David Foster Wallace, Jonathan Franzen, and debates in The New Yorker. Hren’s mastery is dizzying; though only sixty-two pages, the depth and compact density of his arguments contain enough to fill entire university courses. In one page, Hren can go from H. G. Wells on Henry James to Alasdair MacIntyre on Sartre to Flannery O’Connor on Flaubert. This is not to say that Hren’s arguments are unfocused; rather, Hren assembles from these disparate pieces of literary history an image of contemplative realism, like a master medieval artist putting together seemingly incongruent shards of colored glass to make a rose window.

What, then, is contemplative realism? As a way of thinking, it stands between, and above, two extreme views of reality: one of a cold, meaningless, material universe that elides the reality of objective good, human agency, and inherent dignity, and the other of a perfectly pleasant, anodyne, immoderately pastoral or fantastical universe that elides the reality of objective evil, in nature and human action both. As a way of writing, contemplative realism reflects—through, to use Tolkien’s term, subcreation—the part of reality that is beyond reality, the supernatural’s awesome and terrible intervention into nature, to represent in novelistic or literary form the gratuitous and unearned gift of divine grace moving through human history. It is, in a word, Catholicism.

But it is not simply Catholicism, in the same way that a spouse is not simply your husband or wife. The most provocative aspects of Hren’s thought emerge when he articulates anew things about the Catholic intellectual tradition that have been part of that tradition all along, promising to sprout again like new seedlings under a fresh layer of spring humus. This is closely tied to Hren’s second purpose, to “gather and galvanize … a contemplative realist disposition among as many comers as possible—literary chops or no.”

Hren suggests that the contemplative life is not limited to the religious life but is instead proper to every state of life. To engage in the act of contemplative realism—for indeed all contemplation is realistic in the way Hren describes—is not simply the vocation of the novelist or the monk, but the vocation of all men and women of goodwill. It is the light of a universal call to holiness, laser-focused through the stained-glass window of a literature that strives not towards the functional end of entertainment—though it will, as an accident of its essential characteristics, be as compelling as our most fundamental painful and joyful human experiences—but instead toward unveiling some of that bedrock truth that underlies reality. It hopes to produce what Pieper calls “an instance of beholding, namely in the contemplating awareness of the world’s ultimate and intrinsic foundations.” This act, meaningful in itself, forces us to step beyond the horizons of subjective reality, especially beyond the shackles of passive entertained observation, and to stand beside ourselves in the light of, as Dante describes and Hren echoes, “the Love that moves the sun and other stars.”

St. Augustine claimed that cantare amantis est, a phrase that the 1988 collection of Pieper’s essays on art took for its title: Only the Lover Sings. If what Joshua Hren argues in Contemplative Realism is true, we must recognize not only that telling or writing a good story requires love, but that only the lover truly writes. Is it any wonder, then, that Hren concludes his essay not with a summary, but with a hymn?

John-Paul Heil is a PhD candidate in early modern history at the University of Chicago and an adjunct professor of history and the liberal arts at Mount St. Mary’s University in Maryland. He is a 2021–22 Fulbright scholar to Modena, Italy. His writings have appeared in Time, Smithsonian, and the Los Angeles Review of Books.