Politics Between History and Eternity 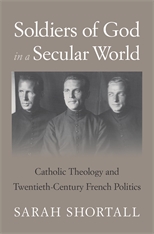 Sarah Shortall’s Soldiers of God in a Secular World: Catholic Theology and Twentieth-Century French Politics has a deceptively anodyne title.

On the surface, the book is an intellectual history of the current in Catholic theology that has come to be known as the nouvelle theologie, a project of Christian theo-political ressourcement that challenged the dominant scholasticism of the age. As the twentieth century unfolded, the diverse proponents of this theological approach—most famously Henri de Lubac, once considered controversial on account of his views on nature and grace—were required to navigate a succession of regime changes, expounding and clarifying their views all the while. This process of development culminated in a dramatic suppression-and-reversal: only a few years after suffering the wrath of church authorities, de Lubac and other defenders of the nouvelle theologie enjoyed privileged positions at the Second Vatican Council. Their theological vision would go on to have a profound impact on the trajectory of Catholic engagements with modernity.

To her credit, Shortall takes her research subjects at their word, persistently refusing to collapse her protagonists’ theological motivations into more materialistic ones. Her volume is primarily focused on de Lubac, Gaston Fessard, Yves de Montcheuil, Robert Hamel, Marie-Dominique Chenu, and Yves Congar. Together they comprised a movement of Jesuits and Dominicans united by their distinctive response to the problem of secularity. That problem persists today: indeed, questions involving the place of religion in political life remain nearly as contested today as they were in de Lubac’s time.

What sets Soldiers of God in a Secular World apart is, quite simply, how strikingly contemporary the debates that Shortall retraces all tend to feel. On the contemporary American right, appeals to the “common good”—a formulation often associated with Catholic thought—now permeate the highest levels of political discussion. Concepts like “liberal neutrality” are no longer taken for granted. And some have even called for a radical reconfiguration of traditionally “conservative” accounts of religious liberty and free speech, in the name of a restoration of Christian culture. The same questions of philosophical theology that animated de Lubac and others remain salient today.

New intellectual movements tend to emerge out of dissatisfaction with dominant paradigms, and the nouvelle theologie was no exception. If the nouvelle theologie has a foil, it must be the tradition that Shortall broadly identifies as “Thomism” or sometimes “neo-Thomism”: a method of theology heavily reliant on syllogistic reasoning, structured argumentation, and a vast complex of Aristotelian distinctions inherited from the medieval period. Against this school of thought, de Lubac, Fessard, and others spearheaded a revival of theology focused on the biblical and patristic concepts lying behind the edifice of the dominant neo-Thomism—a paradigm which they viewed as largely ossified in the face of contemporary conditions.

The central point of divergence between this particular neo-Thomism and the nouvelle theologie, in Shortall’s telling, involved the relationship between the “natural” and “supernatural” orders of reality. On a neo-Thomistic account, these two orders are substantially distinct: one may reason intelligibly about human beings’ “temporal end” (which can be loosely defined as the sufficient conditions for human flourishing) without any reference to humans’ “spiritual end,” or ultimate orientation to God. This distinction, for neo-Thomists, allows Catholics to pursue political engagement alongside others who happen to be outside the Church as such.

As Shortall explains, this distinction between the temporal and spiritual orders resulted in appropriations of neo-Thomism by partisans of both the political left and right. Defenders of the Vichy regime in France appealed to Thomistic natural law principles in making their case for national Christian restoration; merely a few years later, strangely enough, leftist “worker-priests” were engaging directly in class struggle in the name of the temporal common good. The motifs of “Thomism,” in short, could be invoked in the service of quite different political projects.

For the architects of the nouvelle theologie, by contrast, the neo-Thomists’ method was entirely wrongheaded. In their conception, severing the temporal order from the spiritual inevitably tended to accelerate the process of secularization and undermine the Church’s distinctiveness. The nouvelle theologie, by contrast, drew on materials from the early Church to stress the inevitable interpenetration of the spiritual into the temporal. So, too, the nouvelle theologie articulated an ecclesiology that envisioned the Church as less a visible institution than a “mystical body”—a metaphysical unity capable of preserving and perfecting the diversity of its members without subsuming them into the whole, over against the blood-and-soil ideal of the Nazi Volk.

As the decades passed, de Lubac and other proponents of the nouvelle theologie found themselves adopting a persistently critical attitude towards their fellow Catholics’ political interventions. But as Shortall points out, the nouvelle theologie’s claim to stand “above” politics was precisely the catalyst of its political power. And it was this power that tended to relativize and destabilize the authority of apparently dominant regimes, most notably the Vichy government.

In the end, the scholars of the nouvelle theologie were triumphantly vindicated at Vatican II. After being briefly disciplined by papal authorities, Congar and others in the movement played central roles in the drafting of Lumen gentium, Dignitatis humanae, and other seminal texts that—at least on their face—expressed a new Catholic openness to the modern world.

Shortall concludes her account with a brief treatment of some academic descendants of the nouvelle theology, particularly liberation theology and the scholarship of the “postsecular,” leaving the present-day political implications of her study to be worked out by readers. Most notably, contemporary arguments over Catholic “integralism”—a recent movement in political theory that emphasizes the priority of the spiritual authority over temporal authority—plainly retread the same ground Shortall covers. Arguments bearing the stamp of the nouvelle theologie can be found in theologians like John Milbank and D.C. Schindler; by contrast, a thinker like Adrian Vermeule represents the tradition of “two-tier Thomism” in all its fullness. Old battles rage on.

Perhaps this tension, though, is to be expected. In the course of her historical narrative, Shortall identifies two “poles” in political theology: the incarnational and the eschatological. The former tends to emphasize the Church’s role of making Christ present in the world through intervention in human affairs, while the latter stresses the Church’s prophetic function and the need to view politics from the vantage point of eternity. In this conflict, there can be no single victor: the incarnation and eschatology are both essential dimensions of Christianity, and the tradition has historically sought to hold both together. Far from being an obscure intellectual backwater, the story of the nouvelle theologie and its rivals may illuminate the central animating conflict of Christian political theology as such.

Soldiers of God in a Secular World is one of the most provocative explorations of these issues in recent years. It deserves to be read by many more than specialists, as it offers a staging ground for engaging contemporary discussions of religion and politics whose importance cannot be fully understood without reference to last century’s profound theological developments.

John Ehrett is editor-in-chief of Conciliar Post. His writing has appeared in American Affairs, Public Discourse, and the Claremont Review of Books.