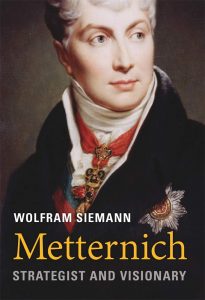 Few nineteenth-century statesman are as famed for their positive contributions to Europe’s practical politics as is Clemens von Metternich. Each of the roles he played, first as an architect of victory over Napoleon, then of the restoration of order in the post-Napoleonic era, and finally of an international system that prevented major wars and largely slowed the emergence of revolution for decades, would have secured him a place in history.

Of course Metternich’s reputation has tended to be shaped not so much by those who admire his positive contributions as by his ideological opponents, by those who have wished to propagate problems he spent his life opposing. Such persons paint the picture of an unthinking authoritarian “reactionary” bent upon restoring Europe to the pre–French Revolution status quo. But his defenders don’t necessarily present a more accurate alternative. Often enough they are content to point out that there were cogent reasons for preferring the Europe of 1788 to that of 1793 or 1812 and that aspersions cast on Metternich’s intellect are grounded in the common leftist tendency to dismiss out of hand those with whom they disagree as (in the words of John Stuart Mill) “the stupid party” rather than attempt any philosophical assessment of conservatives’ positions or the evidence used to support them.

In what should long serve as the standard biography, Wolfram Siemann’s book shows that unless well-educated and better read men and women of action are automatically excluded from the ranks of the intelligent, Metternich ought to be counted among them. Rather than being of an anti-intellectual disposition, he was a serious student of political theory, was heavily influenced by the principles of Edmund Burke, was one of the first major politicians to attempt putting Burke’s thought into practice, and considered late eighteenth-century Britain’s division of real power between king, lords, and commons a model constitutional arrangement.

Metternich’s interest in British politics and in Burke was hardly accidental. “Absolutism” was not, in his early years, equated with tradition. It was a relatively new development whose foundations were laid a century or so before his birth. From the Middle Ages until well into the Renaissance, the official scope of monarchical autocratic jurisdiction tended to be fairly limited. An individual monarch’s de facto power might be much greater depending upon his abilities and interests (and those of his powerful subjects) but might also be much more limited by the same factors. Even arguments for absolutism had often (whether sincerely or cynically) claimed that it was a necessary response to either to external threats or to the subversion of traditional monarchical authority, the implication being that expansion of monarchical control was justified only because this was the only way to prevent its contraction or to protect a nation from its enemies.

Though the Holy Roman Empire had not been free from absolutist developments, it had more or less maintained its traditional constitution as the technical letter of the law. Its monarchy remained elective, the emperors’ power largely limited by the Diet and that of the imperial government as a whole limited by the quasi-autonomous states within the empire, a quasi-autonomy that left the empire comparable more to the European Union than to the United States. The well-known autocracy of some emperors (perhaps most notably of Joseph II) did not apply to their rule of the empire but to that of limited territories within it, of which those elected to the imperial monarchy were hereditary local rulers. Many in this empire, particularly in the circles in which Metternich spent his formative years, saw Britain as a country that not only preserved a similar and (thanks to the island’s Anglo-Saxon past) similarly Germanic system of government but did a better job of doing so, maintaining a meaningful central government without moving into French style absolutism.

At twenty-one years old, in 1794, Metternich, already fluent in English, traveled to Britain for the first time and, as Siemann demonstrates through his new research, not only attended sessions of Parliament but was a much more attentive observer of the workings of the British government than is suggested by the limited selection of primarily sources used by most who give an account of this period of his subject’s life. Meeting Edmund Burke and listening to his speeches was a particular treat for a young man who, four years earlier, had purchased a copy of Reflections on the Revolution in France as soon as the first edition was released and had found it to articulate thoroughly and in depth ideas he himself was already having in more nascent forms.

Burke’s belief that it was necessarily to preserve the basic broad structures of society while allowing for moderate, gradual change became a key foundation of Metternich’s politics. While born into a family that had held noble rank since the fourteenth century and firmly in support of the traditional aristocracy’s continued preeminence, Metternich was not committed to the old order as a totality but to order, to the traditionalist conservative belief that freedom cannot exist unless order in some sense provides its foundation and in some sense limits it. Had he lived to see the post-World War I fall of the House of Habsburg and the dissolution of its empire, he may well have approved of the new conservative government of Hungary that emerged out of an anti-Communist counter-revolution, was recognizably inspired by the country’s traditional political system (though without a royalist restoration), and more or less preserved the old social order.

The post-Napoleonic settlement of Europe agreed at the 1814–15 Congress of Vienna—at which Metternich played so crucial a role—constituted a similar form of quasi-restoration. Royal houses reigning prior to 1789 were generally maintained in power or restored but there was no attempt to return to the European map of a quarter century earlier, new national boundaries created during or in response to decades of war and chaos being accepted and even newly devised by the congress. Nobody even seriously considered restoring the Holy Roman Empire that had been dissolved following the 1805 Battle of Austerlitz. Its replacement was the Austrian Empire (later reorganized as the Austro-Hungarian Empire), which united in a single entity all the territories (some from within and some from outside the boundaries of the old empire) governed as hereditary possessions of the House of Habsburg (whose members, or their spouses, provided all but one of the Holy Roman emperors elected from 1440 on).

Those who could support such a changed European order were not simply wedded to the past. They were willing to accept the types of limited change inevitably part of historical development, even the types of change unavoidably consequent upon undesirable revolutions and wars, while still working to contain change within the bounds of moderation, to preserve established tradition as much as reasonably feasible, to avert revolutionary breaks with the past, and to combat revolutionary ideology. Metternich himself was even willing to passively accept France’s July Revolution of 1830 which, despite its appeal to moderate liberal ideology, effectively left the country’s social structures intact, resulted in only moderate changes to its political institutions (a more constitutionally limited monarchy and a transfer of power from King Charles X to a junior member of the royal family) and rapidly restored peace and order after less than a week of chaotic upheaval.

Siemann’s clarifications and corrections extend well beyond matters related to Metternich’s political philosophy. Even a partial list of the range of topics he addresses would be prohibitively long to mention, but I find one of particular interest, and it can give some idea of the scope of his work. Though the fact that Metternich played an important role in organizing the defeat of Napoleon is sufficiently well-known, the true extent of his contribution has often remained hidden. It is not just, as Siemann argues on the basis of extensive evidence, that Metternich already held a preeminent place in those early days, that he was not merely part of a Napoleonic era equivalent of World War II’s “Big Three” before taking on the dominant role at the Congress of Vienna. Metternich was also, in fact, a talented military strategist who largely devised the 1813 operational plans of the armies of the Austrian Empire, Russia, and the German states of the Sixth Coalition—plans whose faithful implementation led to Napoleon’s abdication in 1814 and suggest that Metternich may well have had the makings of a first-rate field commander.