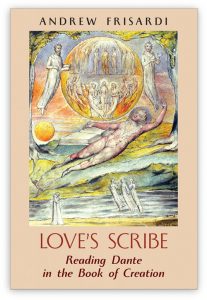 Dante Alighieri, the Supreme Poet, was an intellectual and a member of the elite of his time, albeit not always in favor. He was a poet, essayist, theorist, philosopher, and politician. Yet, as Andrew Frisardi examines in Love’s Scribe, Dante most desired to be the human voice of God’s universal love. So Dante showed his love for God by dedicating himself to the art of reflecting Him, and Dante showed his love for his readers by writing to edify and entertain them in their own language—the warm, inclusive Tuscan dialect, as opposed to Dante’s colleagues, who usually wrote in cold, academic Latin. Like Dante’s guide Virgil, Dante loved his audience, and he wanted to provide anyone who could read with spiritual guidance and freedom.

Frisardi, then, shows his love for the Supreme Poet by gathering thoughtful essays on his work into a coherent, useful book that explores Dante on his terms. By reading Dante in his original context rather than from an entirely modern or postmodern viewpoint, Frisardi communicates what he has learned in a manner understandable and applicable for contemporary readers, whether scholars or novices.

While some contemporary readers may only know Dante’s Inferno, rarely moving past it even within The Divine Comedy, Dante’s place in world literature remains strong. In a time when the literary world is reconsidering and debating the Western canon, all sides appear to agree Dante should remain. Writers like Frisardi, Anthony Esolen, Ryan Wilson, Mary Jo Bang, and many others still publish new essays, translations, and commentaries on their subject. Dante ranks beside Homer and his guide Virgil as one of the most translated pre-modern writers. In the words of T.S. Eliot, “Dante and Shakespeare divide the modern world between them; there is no third.”

Frisardi holds this view as well, having committed his life to the study of Dante’s works. Just as general readers must go beyond Inferno in order to observe the entirety of Dante’s Divine Comedy vision, Frisardi takes us even deeper into Dante’s body of work by assembling Love’s Scribe, a series of eleven Dante essays. Frisardi uses his essays here to orient newcomers to his terms, especially in the introductory essay “Dante’s Poetic Gnosis,” before plumbing the depths of Dante’s genius and culminating in the titular essay. He guides us from a place of relative comfort with our knowledge and interpretations of Dante to a more profound understanding of Dante’s language, symbolism, poetry, and expression. These sorts of essays usually feel too academic, too unwelcoming to anyone other than Dante or adjacent specialists. This is not what Dante intended when he wrote in the common people’s tongue. As Frisardi explains, since Dante realized that Christ’s teachings in scripture are often direct and experiential, Dante wanted his own art to be the same. He aspired to be the scribe of all love, from natural and basic human love to the love of God that moves the universe. Frisardi works through Love’s Scribe to help us see this side of the Supreme Poet.

Frisardi expresses his love of Dante’s poetry through the text of his essays and in the frequent, enjoyable quotations of Dante’s poetry and prose, translated well by Frisardi and others. Avoiding quotations and paraphrases in a strictly mercenary way, Frisardi takes every opportunity to illustrate his points with generous Dante translations and provide the reader with a taste of the joy Frisardi feels in examining Dante. Frisardi recognizes both the pleasure and the meaning in Dante’s works and quotes actual poetry as often as he can. Dante and Frisardi both know that poetry, in order to both entertain and instruct, must build its roads upon pleasure and thrill.

Beyond appreciating Dante’s poetics, Frisardi also appreciates Dante in a medieval rather than a postmodern context. As Frisardi writes in his Preface:

Dante says the manifold things of the creation are like pages bound together by love into a unified book. In medieval thought, the book was a rich and frequently utilized symbol, as in St. Augustine’s view of the universe as a series of successive analogies of God—a Book written by God, in which images and resemblances of God can be discerned. Dante applies this concept in his first book, the Vita nova, which he says draws on material from the “Book of Memory”—the memoried life of the narrator, Dante, which for him would have been written by God rather than created by himself. This way of reading the creation is also a way to read Dante’s … works: as a series of signs that correspond to multiple levels of reality, each resonating with others in the hierarchical chain of being.

In the essay “Dante’s Poetic Gnosis,” Frisardi contrasts this reading of Dante with popular academic interpretations, such as Prue Shaw’s in Reading Dante: From Here to Eternity. Frisardi praises Shaw, calling her “a distinguished Dantist,” but he quotes her comment that “Dante has the temperament of an intellectual and not of a mystic” to show a common misconception in contemporary thought that creates a false dichotomy between so-called mystics and so-called intellectuals. Frisardi argues that Dante, and other medieval thinkers like Ibn Arabi, were both mystical and intellectual. “[Dante] is both ardently devout and intellectually rigorous… In Dante, ardent love coexists with intellectual acumen.” Frisardi emphasizes that “[t]here is no essential conflict between [Dante’s pre-Enlightenment intellectualism] and Dante’s orthodox, devout Catholicism… His orthodoxy is indispensable to his poetic gnosis.”

Frisardi pursues his points well, but he does not always work exactly toward the collection’s purported thesis. The book’s first two and final chapters thoroughly examine the idea of Dante as love’s scribe, open to inspiration from God, in a way the other chapters do not. Though Frisardi’s detours are always interesting, readers hooked solely by the book’s thesis may occasionally find themselves disappointed. Although Frisardi’s subjects and arguments cohere, the essays within Love’s Scribe do not in every instance flow smoothly one to the next, and the writing quality, reading level, and necessary foundational Dante knowledge also varies a little from essay to essay, so the reader does get that “collection feel.” However, these are minor complaints. The reader may simply need to read one essay at a time, absorb the discussion, then return to the well. Reading along with the source texts—Frisardi’s notes direct us to the best translation—will help smooth out this roughness.

In Love’s Scribe, Frisardi teaches us that the primacy of God’s grace and His universal love, illustrated in His book of creation, was sublimely communicated by the Supreme Poet. Frisardi is one of our best contemporary Dantists, one who shows his love rather than insists on it. Dante can be difficult to read and interpret today, but Frisardi guides us and makes our steps a little easier. Love’s Scribe is not an introduction to Dante, per se, but it can serve as a way to wade deeper into the combined sacred and intellectual side of the poet. Virgil guided Dante, Dante guides Frisardi, and Frisardi is guiding us.

Ethan McGuire is a writer and a healthcare information technology professional whose poetry, fiction, and essays have appeared in The Dispatch, Emerald Coast Review, New Verse News, Post Modern Conservative, and other publications. Ethan lives with his wife and their daughter in the Florida Panhandle on the Gulf of Mexico.