Reclaiming Protestantism At Its Best 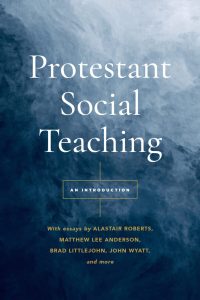 A popular shibboleth of traditionalist history writing is the notion of a direct line running from the Protestant Reformation to contemporary culture’s worst excesses. In doorstopper works like Brad Gregory’s The Unintended Reformation, Reformation theology is blamed for everything from the destruction of metaphysical wonder to the emergence of rapacious industrial societies. All of this is chalked up to a supposed flight from a unified cosmology and holistic social order, in favor of an ever-more-ardent pursuit of personal salvation—variations on Max Weber’s famous argument that distinctly Calvinist anxieties powered the rise of modern capitalism.

Like so many “decline narratives,” this amounts to little more than an elegant just-so story. But it is not a decline narrative that Protestants have rebutted very well. In recent decades, Protestant theologians have not really put forward anything like the integrated body of theological, political, and economic principles popularly known as “Catholic Social Teaching,” and so have tended to take the assumptions of philosophical modernity as a given. Beneath the surface here is something like Charles Hodge’s notion that the Bible is to be taken as the theologian’s “storehouse of facts”—a kind of metaphysical textbook from which decontextualized axioms can be pulled.

No text, though, is ever read apart from an anchoring interpretive tradition. And yet isn’t that exactly what the Reformation pushed against? Must the traditionalist historians then carry the day?

P rotestant Social Teaching: An Introduction argues otherwise. Its task is ambitious: no less than a rehabilitation of a distinctively—and ecumenically—Protestant social doctrine, one spanning (with variations) the Lutheran, Reformed, and Anglican strands of the Reformation. To that end, the work focuses on three major domains: (1) law, justice, and punishment; (2) marriage, life, and death; and (3) property, wealth, and poverty. Chapters within those broad categories cover topics such as the role of the civil magistrate, just war theory, procreation, abortion, private property, and environmental care, among others. In so doing, the book manages to sketch out an internally coherent set of principles that, despite their distinguished provenance, rarely find institutional expression among theologically conservative Protestants today.

Much of the content of this Protestant Social Teaching (“PST”) resembles Catholic Social Teaching—such as its concern for the protection of unborn life and its contextualization of property rights within the horizon of a sovereign God, among other things. But its form is distinct. Specifically, PST tends to ground its claims in arguments from natural law and the early Christian tradition rather than in encyclicals or other ecclesiastical documents, a structural corollary of the fact that the Protestant tradition has historically rejected a single magisterium as the norming source of doctrine. Despite that difference, the Protestant and Catholic social traditions clearly ended up converging on common themes. Such similarity implies a significant degree of unanimity on the metaphysical underpinnings of Christian thought, a theme stressed by many chapter authors.

Among the volume’s individual subsections, Steven Wedgeworth’s chapter on the history of Christian views on abortion—ranging widely across sources from Jewish tradition to the writings of Luther and Calvin—is a particularly outstanding contribution. Similarly strong is Allen Calhoun’s lengthy exploration of how the Lutheran, Reformed, and Anglican traditions shaped the rise of social-welfare regimes in European countries. Calhoun’s work is a devastating rejoinder to claims that the Protestant tradition culminates in a kind of Randian libertarianism, or necessarily guts public forms of poor relief.

Perhaps the most thought-provoking of all is Colin Redemer and Joseph Minich’s chapter on labor and work, which is as much an exercise in constructive theology as a retrieval of the past. Redemer and Minich place Luther and the Puritans into conversation with thinkers as diverse as David Graeber, Gillian Rose, and Ivan Illich, contending boldly for new “laws to recognize the right to form Christian unions so that the principles of our faith can inform our deliberations in our labor.” It is a policy prescription that is both unexpectedly concrete and logically deducible from their theological agenda—a welcome blend.

Overall quibbles are few and far between. It is worth noting that Lutherans are slightly underrepresented among contributors to the volume, and one might have wished for a somewhat fuller treatment of economic issues surrounding trade and finance, such as antitrust—all themes present in Luther’s work and that of other Reformation-era writers. Similarly welcome would have been a chapter exploring the administration of justice in the Consistory of Calvin’s Geneva, and how Protestant modes of legal interpretation diverged (or didn’t) from the prior canon-law tradition.

Additionally, it is worth noting that Matthew Lee Anderson’s chapter on procreation ends on a decidedly strange note, one that reads less as a defense of Reformation theology than an indictment of it. In particular, Anderson takes issue with some of the explicitly pro-natalist language found in Luther and Calvin, and attempts to link this to later antinatalist developments in Western thought. Far too little connective tissue is provided for such counterintuitive claims, though, and the chapter ends up a poor fit with the rest of the volume.

If one overarching theme comes through in Protestant Social Teaching, though, it is that the Reformers celebrated by so many churches today shared a far “thicker” vision of society than the American frontier ideal. As Brad Littlejohn stresses in an early chapter, “the Reformers’ profound respect for the mystery of God-given civil authority is a jarring but needed wake-up call, one that can help us question our own deep-seated individualism.” Theirs was an era of magistracy and hierarchy, not of lone cowboys gazing out upon an untapped wilderness.

Is that notion something to be feared? Some might think so: in a milieu where “Christian nationalism” has increasingly become a term of abuse, any talk of theological influences on politics is increasingly ruled out of bounds. But objectively speaking, the vision offered by Protestant Social Teaching is one of a society far more humane than most alternatives on offer today—from its support for workers to its care for creational order. It is a vision that can still inspire.

In short, Protestant Social Teaching is not only a necessary corrective to slapdash anti-modern historiography, but a daring bid to reclaim the Protestant tradition’s insights for the present. This is ressourcement at its finest.

John Ehrett (J.D., Yale; M.A.R., Institute of Lutheran Theology) is editor-in-chief of Conciliar Post. His writing has appeared in American Affairs, Public Discourse, and the Claremont Review of Books, among other venues.