Recovering the Politics of Prudence 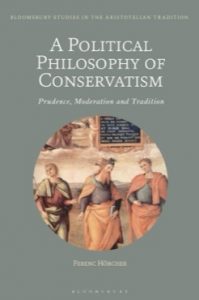 Political theory has for the past few centuries placed justice at the center of political thought. This has antecedents in Plato, as Professor Ferenc Hörcher describes in his new book, A Political Philosophy of Conservatism: Prudence, Moderation, and Tradition. The author asks us to rethink this tradition and explores what happens if we place another of the four cardinal virtues at the center, namely prudence. By first tracing the history of the use of the concept in the Western tradition and then situating it within the context of conservative thought, he presents a new approach to political philosophy. Navigating between Rawlsian utopianism and amoral political realism represented by Machiavelli, this book allows for a new entry point to politics, and one that is much needed in our time.

Professor Hörcher places Aristotle at the root of the conservative family tree. In tracing conservatism to antiquity, he follows such scholars as Roger Scruton (in his book on Conservatism: An Invitation to the Great Tradition) and Andreas Kinneging. The book presents a thorough engagement with the tradition, and re-evaluates it. However, in his presentation of Plato as a political idealist and Aristotle as a realist, there is a possibility to challenge his reading. The difference I point to, I should note, is one of emphasis, and not of content.

Two examples will serve to elucidate my point. First, Professor Hörcher states that the Greek tradition—Plato’s Politeia being the prime example of this tradition—places sophia at the heart of politics (presumably along with justice as mentioned in the opening line). With Aristotle, this is upended, for he places practical wisdom (phronesis) at the center. One might wonder if the concept of paideia (roughly meaning the perfection of a man’s character in accordance with his nature) had been useful here, which seems to me to be of central importance to Plato. This concept includes theoretical wisdom, but also practical training in all aspects of life.

The second point relates to this, as Hörcher states the distinction between the two (sophia and phronesis) was introduced by Aristotle and thus unknown to Plato. While it may be true that the concepts were not distinguished and used in the same way as they are later employed by Aristotle, the distinction is clearly made. Socrates, in the Platonic dialogues, challenges practical professionals—politicians, generals, and others—saying they claim to know things even about their own professions, yet they are ignorant. Why? They lack the fundamental insight into the true nature of things, which requires philosophy, and therefore theoretical knowledge. Hence, sophia is the heart of politics, but a heart is of no use on its own.

The book goes on to trace the genealogy of conservative prudential politics following Aristotle, through Cicero, St. Augustine, St. Thomas Aquinas, and the Renaissance, and ending in late modernity with Gadamer and Ricoeur. Here Hörcher meticulously traces the development of the concept and its use in political philosophy, and the picture that emerges is one of continuity in the Western tradition. This tradition is what conservatism seeks to preserve, yet by tracing the history Hörcher also shows that conservatism does not allow concepts to stagnate.

The book is divided into two parts, the first dealing with the history of the concept of prudence in political thought, which we have looked at above. As the author notes, he cannot go through all the thinkers within the tradition (after all, most thinkers prior to Machiavelli, as he argues, pertain to the tradition), but only mentions a few key theoreticians to show their affinity. Nevertheless, it would have been interesting to read Hörcher’s take on someone like St. Thomas More, who was politically active and touched on many of the themes discussed in this book in his Utopia.

The second part deals with prudence within conservative thought. Three problems are presented first, representing impediments in the realm of human creativity when it comes to politics. These constraints are agency (ideas, wills, or intentions in a political community can only be achieved by solitary or cooperative actions of individual agents, meaning that there is tension between individual and community that has to be addressed); time (a political agent does not have time to gather detailed information about problems that need to be solved); and knowledge (political agents cannot gather all the information needed). Hörcher again suggests prudence as the heart of politics offering a solution to each problem. The exact way of proceeding must be left to the reader to find out, but key to the project is a recentering of political thought around virtues, principally the one suggested as the center of politics, and a reliance on traditions and customs as carriers of collective knowledge, extending over time.

Many—in particular politicians—would benefit from reading this book, which shows there is more to politics than the current hegemony and that certain concepts once known to all are now kept alive only by an educated minority. The tradition presented and defended is done so with bravura, my only criticism being that it seems to me to be broader than the presentation allows. The work fits into the genre of conceptual history, and to this end Hörcher mentions many of the writers associated with the “Cambridge school” of intellectual history, such as J. G. A. Pocock and Quentin Skinner. It is, on the other hand, more than that, and should be read as a contribution to the debate of political philosophy, provoking us to think about the place of prudence within politics, which was once considered important to political thought.

While Hörcher contends that the tradition he defends has Platonic antecedents but really starts with Aristotle, I would wish to include Plato. After all, Aristotle saw himself as a Platonist, frequently referring to “we Platonists” in, for example, his Metaphysics. To this end, we could turn to a quotation from Cicero, whom Hörcher frequently cites, stating “Socrates was the first who called philosophy down from heaven, and placed it in cities, and introduced it even in homes, and drove it to inquire about life and customs and things good and evil.” The source for this Socratic immanentizing of philosophy is Plato, and in his work we see politics as a central part of who man is. In this he has been followed by the Western tradition.

Karl Gustel Wärnberg is a writer and philosopher based in London and Stockholm.