Remedies for our Economic Ailments 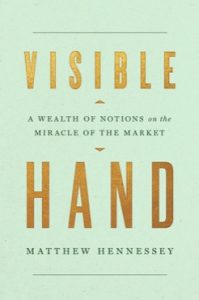 Visible Hand: A Wealth of Notions on the Miracle of the Market
by Matthew Hennessey.
Encounter Books, 2022.
Paperback, 248 pages, $28.

The two books under review here are economics primers for citizens published at a time when economics has become a highly technical game played by expert economists for the aggrandizement of themselves and public officials. This moment has been in the making for a long while, going back at least to early twentieth-century Progressivism. Economics was taken out of the moral philosophy framework in which the classical economics of Adam Smith was embedded, to be remade as a modern mathematical and empirical science. Economics became a stand-alone discipline, but one that was increasingly dependent on and in some sense absorbed by abstract mathematics and statistics. These were believed to be the stuff of which modern science was made. And science, it was presumed, held the keys to wealth, progress, and social harmony.

Because of this, for people today who are not trained economists there are two temptations. One is to shy away from economic issues, leaving them to experts, as most people would shy away from quantum physics or organic chemistry. How often do economists hear from new acquaintances, “I didn’t take economics in college. It was too hard.” The other temptation is for a person, perhaps one who chose not to study economics because “it was too hard,” to hold fast to uninformed and unexamined opinions on economic issues.

The authors of these two books presume, correctly in my opinion, that useful knowledge of economics need not be out of the reach of citizens. Both books show that fundamentals of economics can be presented in a down-to-earth manner that requires no training in mathematics or statistical methods. Most of the economics that is highly technical and accessible only to experts is of secondary or tertiary importance. The authors also presume that informed citizens can and should contribute to the formation of economic policy. Grounding in economic principles can serve as an effective counterweight to the tendency of public officials and their economic advisors to create counterproductive social engineering schemes.

Hennessey writes in the spirit of Thomas Sowell’s Basic Economics, covering the economic concepts with which citizens should be familiar. He does so without the trappings of diagrams and equations that are the framework of most introductory economics textbooks. All too often, students learn that diagrams and equations are the stuff of economics. But these are not; they are merely tools to aid in keeping relationships of prices, markets, wealth, and income in mind. These tools are in fact easy to teach and to grade in students’ work. So economics is usually taught and learned as a type of mechanics. Students learn to begin in equilibrium, shift a curve, and find the new equilibrium. Refreshingly, Hennessey follows Sowell’s narrative approach. He engages readers’ minds with down-to-earth definitions, explanations, and examples. He weaves economic insights with stories of his life and his parents’ lives. This allows readers to discover that they already know much of basic economics. Good economics is common sense; the key training is for the discipline to keep economic principles in mind and to apply them rigorously.

Hennessey’s book is divided into ten chapters that take readers on a tour of the “miracle” of decentralized coordination of diverse people’s aims and activities via markets, as analogized in Adam Smith’s “invisible hand.” Hennessey makes this invisible hand visible. This should be the core idea in any plan of economic instruction, although as Hennessey points out, usually the focus is on “market failure,” with the implied or explicit implication that socialistic central planning is the more intelligent and humane way of organizing social life. Hennessey’s chapter themes are markets, motivations, preferences, prices, specialization, work, business, and Hennessey’s response to opponents of free markets on the left and on the right. 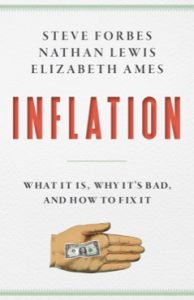 In Inflation, Forbes, Lewis, and Ames answer the three questions suggested in the book’s title: what is inflation, why is inflation bad, and how can we stop inflation? They make use of lessons learned from history, and like Hennessey, they offer down-to-earth explanations. Their use of the lessons of history sets their approach apart from the widespread presumption that new ideas are better than old ideas. Few collegiate or graduate programs in economics nowadays require students to study either economic history or history of economics. In the mid-twentieth century these were required courses of study, and prior to that were interwoven throughout economics curricula. A prime example of the now-prevalent presumption that newer is better is the so-called “modern monetary theory,” which argues that under a fiat currency (i.e., a non-commodity-backed currency) the central bank can finance government budget deficits of any amount with impunity. The message in the name given to this idea, that these ideas are “modern,” signals that this is an improvement over non-modern monetary theory. We presumably know so much more now than we knew in the past! Forbes, Lewis, and Ames show the dangers in this naïve view of progress in economic science.

The book includes chapters on the nature of inflation, history of inflation episodes, why inflation is a bad rather than neutral or a good, how to bring inflation to a halt, and investment strategies in the face of inflation. Two themes running throughout are that inflation is an unmitigated bad and that tying currencies to gold has been an effective preventive for inflation and can be so again.

Money is typically defined in terms of its three functions. It serves as a medium of exchange, store of value, and unit of account. A medium of exchange is an item that is routinely traded and universally accepted in transactions. Only this is uniquely a function of money. In the U.S. economy dollars, in the form of currency and bank deposits that can be used directly to make purchases, are the medium of exchange. By contrast, the store of value function is not unique to money. Non-monetary assets serve as stores of value—assets such as housing, shares of stock, and business inventories. The third function of money, serving as a unit of account, is the focus of Forbes, Lewis, and Ames’s explanation of the harmful effects of inflation. Inflation is a reduction in the value of the standard unit of account. Inflation reduces the purchasing power of a dollar, and thus distorts the real value of wages, incomes, and assets. Relative prices are affected as well, leading to misallocation of resources and products. Moreover, inflation creates uncertainty because higher inflation rates are typically more variable. If unchecked, inflation destroys economic and social bonds. So inflation does not make an economy more productive. Just the opposite; inflation is destructive.

The Federal Reserve system was a product of the Progressives’ goal of bringing scientific control to all facets of life. The intent was management of the supply of money to tame the business cycle, which was thought to be one of the weaknesses of a free-market economy. The massive government bureaucracy that we live with today is, for better or worse, a product of the Progressive faith in scientific management and control.

The headline of the web page of the Board of Governors of the Federal Reserve System states that “the Federal Reserve, the central bank of the United States, provides the nation with a safe, flexible, and stable monetary and financial system.” This is a statement that we are expected to receive as a fact. But it may or may not be true. How could we know? To say that it is difficult to discern whether on balance the Federal Reserve System has been effective is an understatement. For one thing, confirmation of the Fed’s claim requires knowledge of how “safe, flexible, and stable” our monetary and financial system would be without the Federal Reserve. And to make a reasonable conjecture about this counterfactual, one would need to know what alternative institutional arrangements would otherwise have been in place. So confirmation or disconfirmation of the Fed’s claim requires multiple layers of knowledge that is very difficult to obtain, if it is obtainable at all. All that is possible is conjecture based on the record of monetary and financial history.

Forbes, Lewis, and Ames look to history and identify an institutional arrangement they believe performed better than the Fed has performed in recent decades. Since 1971 we have had a fiat currency, actively managed by the Fed. The primary feature of the prior arrangement was that the value of a dollar was fixed in terms of gold. From 1900 until 1933 the United States was on a gold standard, and from the mid-1940s until 1971 was on a gold-exchange standard. The main difference between the two is that under the Gold Standard Act of 1900, the U.S. Treasury was obligated to the public to redeem paper currency for gold coins at a fixed price. Under the gold-exchange standard (the Bretton Woods system) from 1944 until 1971 the U.S. Treasury was obligated to foreign governments to redeem dollars for gold bullion. In both systems the dollar was anchored to gold at a fixed value. This put constraints on the supply of money. And this is the most important feature of the gold and gold exchange standards to which Forbes, Lewis, and Ames suggest we return.

In summary and conclusion, both of these books provide clear and convincing access to economic fundamentals that informed citizens need to understand. These fundamentals are like a roadmap for navigating through public discourse on economic issues, separating fact from fiction, more likely from less likely conjectures. The ideal practice in empirical science is to observe that which can be seen, collect data from observations, and come to conclusions on the basis of empirical reality. This noble goal is all too often not realized. Science is a human activity, and it requires more than expertise. Good science requires honesty, humility, and frequently courage. With the exalted status that science and scientists are given in our time, the temptation to misuse the authority of science is great. Knowledge of the economic fundamentals covered in these two books is essential for being able to see whether economic emperors really have on clothes or not.

However, in what has been called a post-Christian culture our biggest social problem may not be ignorance of economic principles so much as ignorance of moral principles. As I have indicated, I agree with Matthew Hennessey that knowledge of the fundamental insights of economics is important. But this is not enough. Unfortunately, Hennessey follows the lead of mainstream economists in treating moral standards as based on nothing more than subjective personal preferences. So, in explaining the social benefits of free trade he presents pornography and abortion as not intrinsically different from any other services that consumers demand and businesses supply. His selection of these two intrinsic evils reflects a poverty of knowledge about the most important question that we face today—what does it mean to be human?