Restoring the Role of the Citizen 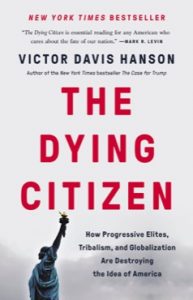 The Dying Citizen: How Progressive Elites, Tribalism, and Globalization Are Destroying the Idea of America
By Victor Davis Hanson.
Basic Books, 2021.
Hardcover, 432 pages, $30.

Victor Davis Hanson’s The Dying Citizen makes a substantial contribution to our understanding of the macropolitical trends of globalization, greater government control, and the idea of an evolving Constitution. Having read Hanson’s book, the reader will have a clearer idea of our nation’s progression toward a statist society governed largely by unelected bureaucracies and serving the purposes of political and corporate elites. Hanson portrays America as a nation in which the prerogatives of citizenship steadily continue to be replaced by those of powerful oligarchies and in which the rule of law and constitutional liberties are under assault. Like the citizens of ancient Athens and republican Rome, those of modern democracies have seen their rights restricted and their influence at the polls undermined by powerful elites who govern for their own benefit and who impose their progressive ideology on those who disagree with them.

Hanson’s focus on “the citizen” is highly apropos to present conditions and to his effort to clarify the particular nature of American citizenship. Unlike most of Europe, in which elites have always exerted great influence on government, the United States is a nation in which citizens possess a constitutional right to participate freely and equally in the governance of their country. Hanson finds that this greater participation of the citizen has played a central role in the rising power and prosperity of America during its first two centuries. Unfortunately, that ideal of citizenship is now threatened by a host of antidemocratic forces both at home and abroad, and Hanson offers only a glimmer of hope for a revitalized citizenry based on the possibility of the restoration of decentralized government, a truly free press, and constitutional government.

Hanson possesses that rare quality of scholarly reserve and even-handedness in analyzing issues and events even of a controversial nature. In this respect, he resembles Orwell with his passion for intellectual independence and devotion to truth. And like Orwell before him, Hanson is especially concerned with honesty in the use of language. One example of Orwellian speech, Hanson notes, is the manner in which “language continues to be reinvented to reflect the political massaging of illegal immigration.” From “illegal” to “undocumented” to simply “migrants,” and migrants whose hardships are made to appeal to our charitable instincts, the national debate over immigration and particularly Hispanic immigration has been clouded by a politically dishonest use of language.

Connected with large-scale immigration are the 560 “sanctuary” jurisdictions that, in effect, practice nullification in regard to federal immigration law. As Hanson demonstrates, the practice of sanctuary is a slippery slope, since the idea of nullification spreads easily to other matters. If some cities and states refuse to enforce federal immigration laws, what prevents others from taking whatever actions they wish vis-à-vis the federal government? The end result of such nullification is always to weaken the status of the citizen, since a refusal to apply the law, however unpopular with some, always proves harmful to others and in the end weakens the public’s respect for the rule of law and undermines the citizen’s constitutional right to govern.

Alongside illegal immigration comes the increasing tendency of Americans to self-identify by race, and of political elites to encourage this practice, a practice that Hanson finds “reactionary to the core.” It is not, of course, the first period in political history when large numbers of persons within a state have aligned themselves by race, as for example die volk in Germany, la raza in Spain, or la razza in Italy. The problem is that self-identification by race, gender, national origin, or other factors displaces one’s identification as “American” and involves the danger of Balkanization both at the polls and in the streets.

Even as the American citizen faces these challenges, the expansion of government powers poses a greater threat as an entitled and haughty bureaucracy at all levels of government now makes, interprets, and administers rules that have the effect of law. Hanson cites the cabal of Deep State figures who attempted to unseat a democratically elected president following the 2016 election and of the failure of the media to report these abuses. It is true that “dirty tricks” such as occurred on the part of Trump’s opponents is nothing new, but the brazen quality of this opposition, with an elected president having been impeached twice, once after leaving office, has brought the attack on democracy to new heights. Along with the abuses collectively known as “Russia-gate” have come extraordinary restrictions on free speech, especially on the part of the new media with its “banning for life” of President Trump and other conservative figures.

The same elites who engaged in unlawful and dishonest tactics to oppose a legally elected president have a history of putting the interests of other countries ahead of those of the United States. This globalist mentality was plainly expressed by President Obama when, while speaking in Germany in 2010, he declared that all nations must be considered exceptional, and not America more so than others. That idea of global equality implies that wealthier nations have the obligation to raise living standards within poorer countries to the global average, either by trade preferences or direct transfer payments.

Globalists, however, are not so much loyal to the poor as they are to the interests of their own class and “to the systems and fonts of their wealth and success.” There is a danger, as well, that globalization will not just endorse the interests and worldviews of the elite at home but that the autocrats who rule much of the world, such as those in China, Russia, and Iran, will take advantage of progressive faith in one-world solutions and overwhelm the remaining truly democratic nations.

Hanson finds that “globalization tends to dilute and warp classical American citizenship” through the creation and promulgation of a transnational culture and a host of client states dependent on military and economic support, the cost of which has been borne by the American taxpayer. America’s globalist ambitions enriched a meritocracy at such institutions as the World Bank who lobbied, planned, administered, and consulted in connection with the postwar project of bringing freedom and prosperity to dependent states around the world. The project also enriched many in corporations and popular culture while working-class Americans suffered as their jobs were exported to cheaper and less regulated labor markets.

For decades, the political elite displayed little compassion for this class of “deplorables” even as they bemoaned the condition of women in the Middle East or the poverty of many in Africa and Latin America. Hanson’s paraphrase of former treasury secretary Larry Summers is apt: “if the new meritocracy fueled inequality [in America], this was because people were being treated as they deserved.” In effect, progressives believe that the broader population would do best to assume the role of a modern-day peasantry and allow “experts,” which is to say progressives themselves, to govern in their stead. It may well be, as Hanson suggests, “that elites see progressive globalists such as themselves as a sort of Platonic guardian class” and that this guardian class is perhaps the greatest threat to the American citizen and to the traditional idea of America as Hanson defines it.

Despite his keen analysis of a broad range of threats to the American citizen, Hanson offers few solutions, perhaps because he senses that the problems we face are only getting worse. A government that has already grown to gargantuan size may well double or triple over the next few years with the passage of ever greater “emergency” social spending bills. An illegal alien population of twenty million may grow to sixty million by mid-century, and the damage of globalization and the consequent rise of China may outpace American economic and military strength. No wonder that the emphasis of Hanson’s book is not on solutions and his tone less than hopeful.

The Dying Citizen is a sobering account of where we stand and of how we got there, and the implicit message is that the citizen himself must recognize the peril and assert his authority. Perhaps he will do so in the way that Hanson’s Athenian heroes attempted to do? Though in light of the extent to which Athenian democracy was fraught with dissension, corruption, and poor judgment, and of how in the end Athens fell to its enemies, it may take something more than classical precedent to save today’s citizen. Still, Hanson’s message is that something must be done, and The Dying Citizen, with its convincing analysis and forceful argument, should be enough to start anyone who reads it thinking of what this something might be. In sum, Hanson’s book is an impressive diagnosis of the challenges facing America and, implicitly, a call to its people to restore the central role of citizenship within a democratic society.