Returning to the Heights of Statesmanship 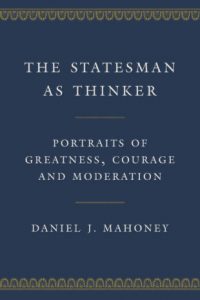 “Let us return to the heights,” Daniel J. Mahoney begins the concluding paragraph of The Statesman as Thinker. In this work, the writing of which “entailed . . . an act of intellectual and moral recovery,” Mahoney exhorts us to hope for more from our leaders and to demand more from ourselves—more gratitude for great statesmen and the inheritance that they have passed on to us, more openness to human excellence and its importance, more conviction about moral truth, and more rigorous thought about the characteristics of statesmanship. Through engaging portraits of the lives, characters, and thought of select statesmen-thinkers, Mahoney makes a spirited case for statesmanship, human greatness, and the necessary combination of intellectual and moral virtues, written in a manner capable of reaching beyond an academic audience.

Attention to three prominent features of the book will illuminate its contribution to thinking about statesmanship. First, there is its emphatic account of the gravity of its subject. Put simply, Mahoney contends that statesmanship matters—even that it is “indispensable.” In Democracy in America, as Mahoney notes, Alexis de Tocqueville describes the distinguishing marks of aristocratic and democratic approaches to history. Aristocratic historians focus on the influence and achievements of a select few individuals, who loom large in their historical narratives. In contrast, democratic historians downplay the impact of individuals, attributing the trajectory of history to grand, impersonal forces. Most contemporary historians fall within this latter camp, dismissively rejecting the alternative as a “Great Man” theory of history. Mahoney, however, stands firmly against, in Tocqueville’s terminology, these democratic historians who diminish the role of great figures.

Thus, Mahoney affirms that George Washington “was truly the father of his country.” Abraham Lincoln was responsible for “saving a union dedicated to the great proposition of liberty and equality ‘under God,’ defeating a Confederate rebellion dedicated to the indefinite perpetuation of chattel slavery, freeing the slaves, and pointing toward a ‘new birth of freedom’ . . . that would redeem the promise of the American founding.” As to Winston Churchill, Mahoney offers the following formulation: “No Churchill, no survival of British liberty or the cause of Western civilization.” In this way, Mahoney provides a Tocquevillean corrective which, to borrow a phrase from Tocqueville, “prop[s] us up on the side where we lean.”

Mahoney acknowledges that statesmen of the highest quality are always rare and suggests that their presence is most critical during periods of crisis. Nevertheless, we should take little solace in the hope that we may be able to get by without them during ordinary times. When might a crisis arise? When might we be on the brink of one? After all, in his chapter on Lincoln, Mahoney remarks that we are currently “in a union gravely divided once more.” Thus, his analysis impresses upon readers the exigency of fostering the conditions for statesmanship now.

A second noteworthy feature of the book is its unyielding defense of the concept of human greatness via its vindication of the greatness of its focal figures. Mahoney points out the ongoing onslaught against these statesmen-thinkers: Tocqueville is subjected to a “cottage industry” seeking to discredit him for imperialism; Washington is discarded as a slave-owner; Lincoln is “denounced as a racist” and as morally indifferent toward the anti-slavery cause; Churchill is charged with political blunders, imperialism, and racism. Mahoney takes notice of these lines of criticism and places them in stark contrast with the perspective that he presents. In doing so, a few of his premises about judging the legacies of individuals become apparent: that much condemnation of these historic figures is rooted in misunderstanding and a deficiency of knowledge, imagination, and generosity; that greatness and goodness are not contingent upon perfection; and that one should not look solely at the darkest facets of an individual’s life.

A third defining feature of this work is its encouragement of a nuanced understanding of the characteristics of statesmanship. Mahoney often refers to the combining, mixing, or melding of virtues: for example, statesmen exhibit magnanimity coupled with moderation, moral principle combined with prudence, courage paired with the love of peace. Mahoney also draws distinctions between these virtues and their related vices or errors. Statesmen direct their actions on the basis of prudence, not “mere calculation” or “unprincipled pragmatism.” They are morally principled, but they do not indulge in “moral preening and virtue signaling.” They cherish peace, but they are not pacifists. They are courageously willing to go to war, but they are not misguided by the allure of military glory. By emphasizing these distinctions, Mahoney facilitates an attentiveness to the dangers of mistaking vices for virtues, or of contenting ourselves with isolated virtues that stand in need of being balanced and combined with others.

As one would expect from a book with this scope and subject, The Statesman as Thinker leaves much to be explored further. For instance, Christianity plays a pivotal role in Mahoney’s understanding of statesmanship. Mahoney frequently draws attention to his exemplars’ relationship to the Christian tradition. He demonstrates that they were not atheistic, they were not hostile to religion, and they did not merely instrumentalize Christianity for political purposes. At the same time, he indicates that statesmen need not be believers in an orthodox or traditional sense. The various chapters explain that Tocqueville, Lincoln, Churchill, and Václav Havel—the former President of Czechoslovakia and the Czech Republic—were not. The first three, he notes, expressed broadly theistic views, while Havel’s beliefs were “quasi-theistic,” occasionally “bordering on New Age philosophy.” Yet all of these statesmen-thinkers were respectful of the Christian faith and committed to a moral framework meaningfully aligned with (and, Mahoney suggests at points, shaped by) Christianity. Necessary, sufficient, and desirable criteria for a statesman’s orientation toward religion thus seem to be built into Mahoney’s analyses, but The Statesman as Thinker leaves room for further exploration and reflection on those criteria.

In a similar way, the character of statesmen is, of course, central to the book, but some of its portraits lead to difficult questions about how we should think about the moral shortcomings of leaders, especially in cases where we might categorize those shortcomings as “private.” Mahoney writes that Tocqueville strained his marriage through his “occasional infidelities,” but he points out that Tocqueville “confessed and regretted” them, and that he remained “devoted” to his wife throughout their lives. Havel engaged in “serial infidelities,” but those infidelities were somehow subsumed under “a larger fidelity, an unbreakable partnership.” Charles de Gaulle was prone to hubris and outbursts of anger, even employing anger “as an instrument of statecraft.”

These observations correspond to Mahoney’s argument that greatness and goodness are distinguishable from perfection. His analyses convey a judgment that these statesmen-thinkers’ moral failings are relevant considerations but ultimately outweighed by their considerable merits. The Statesman as Thinker represents a fair-minded assessment of these statesmen’s lives, but, with respect to other leaders, readers are faced with a challenging task of figuring out how to weigh such shortcomings, particularly when we lack the advantage of hindsight in measuring whether an individual’s life, as a whole, was lived with excellence. In a constitutional republic, we must choose whom to elevate to positions of power and influence, based only on what has become public knowledge about their character at a given point in time.

Finally, Mahoney ends with an affirmation of our capacity to choose our future course: “We can again see the likes of the great statesmen-thinkers chronicled in this book if we dare to repudiate repudiation and once again open ourselves to human excellence in all its forms. To fail to do so would be a brazen act of nihilism and cowardice at the service of pure negation. The choice is ours.” Mahoney’s resolute conclusion contains echoes of what one finds in Tocqueville’s conclusion to the second volume of Democracy in America. But Mahoney and Tocqueville both give weighty reasons to be concerned about the prospects for human greatness and statesmanship in our present age. How are we to find such statesmen-thinkers today? How are we to form them amidst the culture, society, and technology of the twenty-first century? How are we to persuade them to participate in democratic politics, and how are we to convince democratic citizens to admire them and to entrust them with authority?

The Statesman as Thinker may not answer all of these questions. But its case for human greatness and for the indispensability of statesmanship constitutes a thought-provoking challenge to seek out such answers with an earnestness befitting the task.

Zachary K. German is an assistant professor in the School of Civic and Economic Thought and Leadership at Arizona State University. His research focuses on American political and constitutional thought, along with early modern thought, with an emphasis on, among other subjects, statesmanship.