Richard Weaver Explained Our Cultural Predicament Over 70 Years Ago 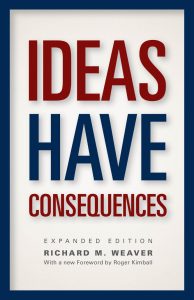 In his 1948 masterpiece Ideas Have Consequences, Richard Weaver assessed the cultural decline afflicting the West caused by the elite abandonment of the Judeo-Christian heritage. In the book’s introduction, Weaver wrote that his book was about “the dissolution of the West.” “We have for many years,” Weaver wrote, “moved with a brash confidence that man had achieved a position of independence which rendered the ancient restraints needless.” Our abandonment of those ancient restraints means that “[w]e approach a condition in which we shall be amoral without the capacity to perceive it and degraded without means to measure our descent.”

Weaver was a southerner who taught at the University of Chicago between 1944 and 1963 (when he died at age 53). He was described as a loner, a bookish man, who wished to preserve the good virtues of the Old South—not slavery or segregation, but the more noble traditions, customs, and religion of southern people. He was also described as someone who repudiated much of the modern world because he believed the world had “lost its center.” After Ideas Have Consequences appeared to much acclaim, and much criticism, Weaver became somewhat of a celebrity and joined the then fledgling modern conservative movement that eventually gathered around William F. Buckley, Jr., and National Review.

Weaver’s Ideas Have Consequences has an uncanny resonance today as we suffer the cultural and moral decay of progressivism, irreligion, impiety, wokeism, and political correctness that dominates Western life.

Weaver hoped in 1948 for some sort of moral restoration, but for that to happen, he wrote, the world must again distinguish between good and evil. And that would challenge the world view of what he called “the apostles of modernism” who pointed to improved literacy rates as evidence of mankind’s progress, forgetting perhaps that Germany in the 1930s was “a totally literate nation.” Education, Weaver understood, does not automatically protect humans from moral degradation and a descent into evil. Nor does the accumulation of wealth and comforts necessarily translate into happiness. Weaver noted the prevalence in the West of “deep psychic anxiety” and “neurosis,” along with feelings of “powerlessness.”

One of the signs of modern decadence, Weaver thought, was man’s loosening the bonds of self-control and succumbing to the “ravages of immediacy.” He noted “the failure of the modern mind to recognize obscenity” and the tendency to make a virtue of “”desecration.” “Propriety,” he wrote, “was abandoned because it inhibited something.” Weaver criticized the rise of sensational journalism that “testifies to man’s . . . determination to enjoy the forbidden in the name of freedom.” This moral decay, he predicted, will lead to a “deterioration of human relationships,” including “those of the family.” The focus on immediacy—on the here and now—will lead to “the neglect of aging parents” and the belief that “children are liabilities” and can be discarded in pursuit of “the good life.”

Weaver struck at the very heart of modern progressivism by calling the notion of absolute equality a “disorganizing concept” that is designed to undermine order. The promotion of absolute equality, other than equality under law, “is order without design,” a “meaningless and profitless regimentation of what has been ordered from time immemorial by the scheme of things.” The promise of equality of condition, he explained, leads to injustice because no two people are equal in everything and all attempts to impose absolute equality—what Weaver called “radical egalitarianism”—leads to “despotism.” Weaver praised the American Founders for drafting a Constitution that is a “rebuke to the romantic theory of human nature,” which is why that document was, and is, so hated by progressives from Franklin Roosevelt to today’s proponents of the “living” Constitution.

Quite controversially, Weaver praised the “Ciceronian tradition” of the Old South, and noted that both Jefferson and Lincoln belonged to this tradition. He decried a modern liberalism that enjoins us from “saying things about races, religions, or national groups,” and prohibits defining, subsuming or judging in favor of a “sensibility toward the cultural expression of all lands and peoples.” He criticized “egotism” and “self-absorption” that cuts people off from “social harmony.” The goal of modern life, he wrote, “becomes self-realization.” And, he noted, “a spoiled people invite despotic control.”

A key reason for the West’s decline, according to Weaver, is the “separation of education from religion,” which provides “indoctrination” by agents of the state, and the influence of our cultural institutions (“the press, the motion picture, the radio” and television in its infancy in Weaver’s time). He doubted that the Western democracies would continue to allow a “real freedom of the press.” He lamented the moral degeneracy promoted by “motion pictures” that is “hurrying us on to perdition.” “The entire globe,” he marveled, “is becoming imbued with the notion that there is something normative about the insane sort of life lived in New York and Hollywood.”

Weaver also sensed that affluence and the desire for a comfortable life was leading Western citizens to cede more and more power to the state. He posed the question “of whether the West will allow comfort to soften it to a point at which defeat is assured” in its global struggle with communism. And at home, the more power ceded to the state, the greater danger that the state will evolve into a bureaucratic despotism. Modern man, Weaver feared, was descending into chaos. And chaos can lead, as it did during the 1930s, to people turning over their lives and their property to “unrestricted political control” which resulted in only “temporary amelioration and the illusion of future security.”

The control of language and the “meaning” of words and phrases was another area of concern for Weaver. Reporting had become “distortion.” There was a “divorce between words and conceptual realities.” Language had changed “so that the father has difficulty in speaking to the son; he endeavors to speak, but he cannot make the realness of his experience evident to the child.” “‘Progress’ in language and its meaning,” Weaver wrote, “makes the father and child live in different worlds, and speech fails to provide a means to bridge them,” which has the effect of undermining tradition.

Finally, Weaver lamented the decline of piety, which he defines as “a discipline of the will through respect.” And a key form of piety is a respect for the past. The West has too often attempted to “cut ourselves off from history” which has led to a “condition of collective amnesia.” For modern progressives, the past “inhibits them,” so they seek to discount it, change it, or erase it. Yet, he wrote, “[a]wareness of the past is an antidote to both egotism and shallow optimism.” The past “teaches us to be cautious about man’s perfectibility and to put a sober estimate on schemes to renovate the species.” Those who seek endless progress, Weaver wrote, would benefit from reading Plutarch’s Lives, Gibbon’s Decline and Fall, and Dante’s Inferno. But modern impiety and modern progressivism hold contempt for the past.

A year before he died, Weaver wrote that “[t]he past shows unvaryingly that when a people’s freedom disappears, it goes not with a bang, but in silence amid the comfort of being cared for. That is the dire peril in the present trend toward statism.” Sixty years later, the trend Weaver feared has further advanced in all Western countries. He did not live to see the progressives of the 1960s gradually infiltrate and takeover the West’s cultural institutions and produce a cultural decay that makes the world of 1948 seem like a glorious age of conservatism. And he did not live to see the culture of abortion on demand, euthanasia, widespread acceptance of pornography, the sexualization of children, the normalization of deviance, and other maladies that afflict our contemporary world. Ideas–especially bad ones–do, indeed, have consequences.

Francis P. Sempa is the author of Geopolitics: From the Cold War to the 21st Century. He is an attorney and an adjunct professor of political science at Wilkes University. His work has also appeared in The American Spectator, the Claremont Review of Books, and Human Events.