Rights, Power, and Democracy Among the Anti-Federalists 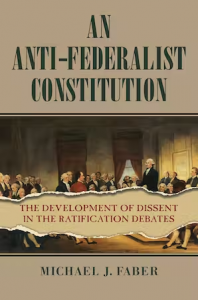 An Anti-Federalist Constitution: The Development of Dissent in the Ratification Debates
By Michael J. Faber.
University Press of Kansas, 2019.
Hardcover, 536 pages, $55.

Whereas many scholars of the Founding have tried to explain Anti-Federalist opposition on the basis of class or social status, Faber focuses instead on the development of Anti-Federalist ideas. He draws upon recent works on the Anti-Federalists that reveal a diversity in their approaches and arguments. At the beginning of the ratification debates, Faber asserts, three strains of Anti-Federalism existed. Rights Anti-Federalism, located primarily in the South and West, “focused on the individual and the potential for government tyranny.” Exemplified by Virginia’s George Mason and the “Federal Farmer” of New York, these opponents of the Constitution persistently pressed for a bill of rights. Power Anti-Federalists, strong in the northeast, were “more concerned with the states as defenders of the people” and wished to balance “powers between the state and national governments.” Faber uses Elbridge Gerry of Massachusetts and “Brutus” of New York as his primary examples. Finally, Democratic Anti-Federalists, strongest in western and rural areas, “wanted to see a more positive and direct role for the people in any government.” “Centinel” of Pennsylvania serves as Faber’s example of this thinking. Faber argues that as the ratification debate progressed the three Anti-Federalist groups coalesced into a “coherent Anti-Federalist position” that consistently proclaimed three things: “a stronger federal system, a simpler and more transparent government, and an effective and extensive bill of rights.”

The strength of Faber’s book lies in his historical approach. He argues that the “context of the debate” as well as the “strategy” used by the Anti-Federalists mattered greatly. Thus, he proceeds chronologically through ratification, an approach that allows him to use both the national and state contexts to explain the development of Anti-Federalist ideas and strategies. Additionally, Faber’s method allows him to examine and dismiss previous scholarly charges that the Anti-Federalists were leaderless and hapless. The Federalists, it is true, had evocative leaders who helped build momentum early in the process while the Anti-Federalists remained divided in their arguments against the Constitution. Yet Faber argues that Anti-Federalists did organize and attract important spokesmen for their cause. Near the end of the ratification battle, “the Power and Rights positions converged,” excluded radical Democratic arguments, and put forth a “clear opposition position.”

But it was too late. The Anti-Federalists finally settled on a strategy of recommending amendments to the document, but the 1791 Bill of Rights “represented little more than a token effort to quell opposition without yielding any substantive points or changes to the opposition.” For Faber the Anti-Federalists’ most powerful, and lasting, argument “was that the Constitution was too vague, and would enable the national government to interpret its own powers ever more broadly, until there was a consolidated national government ruling over subordinate states and oppressed people.” The prevalence of this perspective in strains of both right and left political discourse throughout American history is proof that the Anti-Federalists are still with us—and are still losing.

Unfortunately, Faber’s taxonomy of the three strains of Anti-Federalism is the weakest part of his book. First, he assumes rather than proves the regional hegemonies of the different strands of Anti-Federalism. The evidence Faber presents instead suggests that each of his three strains was present in most of the states he covers in depth. For example, in describing a Georgia Anti-Federalist, Faber writes, “He takes a Power Anti-Federalist position, which stands out as unusual in the south.” Again, speaking of North Carolina, he noted, “The opposition here, as elsewhere in the southern states, was predominantly Rights Anti-Federalism, but as in Virginia, the North Carolina Convention mixed concerns about power with its demands for a bill of rights.” Additionally, discussing New Hampshire, he maintains, “The overall tone of the Anti-Federalist opposition in New Hampshire was distinctive, and does not fit neatly into any category of Anti-Federalism.” These are three of numerous exceptions to his model that Faber makes. He even admits, “Dividing all of the Anti-Federalists into three camps is not necessary; the dividing lines are blurry, and become even more blurred later in the debate.” If this is true, then his tripartite division is not useful and leads the reader back to considering older classifications of class and social status as more definitive measures of Anti-Federalism.

Actually, Faber’s attempts to divide Anti-Federalists on the basis of ideas is a promising approach given the inability of the older historiographical controversies to account for all the evidence. The historiographical debates over ratification have not paid enough attention to the diversity on both the Federalist and Anti-Federalist sides. Faber’s classifications, however, seem simply to apply new terms to an older nomenclature. The Rights Anti-Federalists seem to be classical liberals while the Power Anti-Federalists resemble classical republicans. The Democratic Anti-Federalists mimic the “radicals” debated by Charles Beard and Merrill Jensen during the 1940s. If this is the case, then Faber should be commended for recognizing the important diversity among Anti-Federalists. On the other hand, Faber could have utilized more of the vast scholarly debates over these positions to better explain the Anti-Federalists. The book might have examined the origins of these Anti-Federalist divisions by paying attention to the genealogy of their ideas. Past scholars have identified both a long-range intellectual history of these three schools of thought as well as short term, contextual explanations rooted in the imperial crisis and the American Revolution. Grounding the diverse schools of Anti-Federalist thought in the existing literature would have explained better the commitments of the Anti-Federalists Faber covered

Faber should be commended for his diligence and his attention to ideas. He read the voluminous literature and cited the expansive historiography. In other words, he did his scholarly duty. The book contributes to our knowledge of the ratification debates and points to new directions for further study. While Faber successfully revives Anti-Federalist ideas, his book leaves room for further scholarly scrutiny and attention.