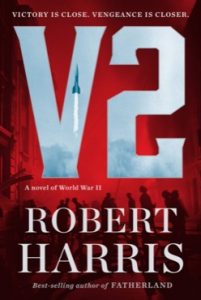 The unconditional surrender of all German forces in early May 1945 triggered a mad dash by the Allies to exploit the defeated enemy’s military assets, especially jet aircraft and ballistic rockets. While it was suggested by some that their rockets would be used in the continuing conflict against the Japanese, the fact is that German ballistic rockets had no effect on World War II but were considered the weapon of the future and thus coveted by the Allies, especially the U.S., the Soviet Union, and, to a lesser degree, by Great Britain and France.

In V2: A Novel of World War II, the V2 ballistic rocket is the lead “player.” Officially, the rocket with a range of 225 miles was designated the A4, with the A6 on the drawing board said to be able to reach the continental U.S. After the German “rocketeers” achieved a successful launch, Hitler directed that it be placed in production and perhaps fantasized that indefensible attacks on England would induce the British to withdraw from the conflict, allowing Germany to shift its military force to defeating the Soviet Union. But Britain, under Winston Churchill, stood firm and the A4 became the V2, “not for ‘Victory’ but for ‘Vengeance,’” launched by Germany late in the war mostly as payback for the British Royal Air Force’s bombing of German cities.

The source for the novelist’s description of the V2 ballistic rocket program was The Rocket and the Reich: Peenemünde and the Coming of the Ballistic Missile Era (1995) by Michael J. Neufeld. It is listed at the end of the novel. Readers interested in the details of the German rocket program should turn to Neufeld. Otherwise, stay with the digest presented by author Robert Harris; this work is so accurate I would have described V2 as a “nonfiction novel.”

The story is set during and beyond five days in November 1944 when V2 rockets rained down on London and involves two imaginary characters whose lives intertwine: On the defensive side of the German rocket bombing is Kay Cotan-Walsh, an English officer in the Women’s Auxiliary Air Force. Lt. Cotan-Walsh is determined to play an active role in the conflict. On the offensive side is Dr. Rudi Graf, a rocket engineer and longtime associate of Dr. Wernher von Braun. (I have a hunch that Graf is based upon a young Luftwaffe officer posted to the rocket program. In his 1996 memoir The Peenemünde Wind Tunnels, listed as a source of the novelist, Peter P. Wegener reveals that he witnessed the horrible treatment of slaves in the underground rocket factory after he was led into the inferno by Dr. von Braun. This induced him not to join von Braun’s team. He immigrated to the U.S. and became a Navy employee and subsequently a professor at Yale University.)

As novelist Robert Harris points out in a brief author’s note: “Apart from such well-known historical figures as Wernher von Braun and SS General Hans Kammler, my cast of characters and their particular adventures are all purely imaginary.” While von Braun is well-known, General Kammler is not. Trained as an architect, he is known to have designed and supervised the construction of both Auschwitz in Poland and the underground rocket production factory at Nordhausen, Germany. He is, without doubt, the personification of the devil, something readers will draw from the novel and confirmed by my own research.

Harris is a talented writer and has orchestrated an especially interesting and suspenseful storyline that not only creates realistic and sympathetic characters but informs the reader of the historic introduction of ballistic rockets to modern warfare. But, as Harris points out in his acknowledgments, it was a costly military asset that contributed nothing to either Nazi Germany’s military prowess or the outcome of the war. At the end of the novel, Harris quotes a fellow writer who “described the V weapons programme—which cost the German economy more dollar for dollar, than the U.S. spent on the Manhattan Project—the greatest waste of resources by any combatant country in a supremely wasteful war.” It was a weapon, not for the Second World War, but for the Third!

A note from the reviewer on Memorial Day 2021

My personal interest in the German-American rocket program began in World War II, first as a young fighter pilot who, in early 1945 spotted a V2 contrail, then, at war’s end, being assigned to serve with the Army Air Forces Project Lusty (Luftwaffe Secret Technology). This led me to Nordhausen and the underground V2 factory only to discover that US Army Ordnance had laid bare the factory of rockets and the German rocket experts (led by Wernher von Braun) had fled what was to become the Soviet Zone of Occupation.

Unconnected to my wartime experiences, the 1950s found me employed at the White Sands Missile Range. As Training Administrator, I was assigned a large building, half set up as an auditorium, the other half held a V2 rocket laid out horizontally with a portion of the outer skin removed to reveal the inner works.

Dr. von Braun and most of his “team” had relocated to Huntsville, Alabama, but more importantly, I met the two officers that had “relocated” the Germans and some 100 V2s, “in whole or in parts” to the White Sands Missile Range in 1945. The two officers were featured in my history play, Exploitation: Dawn of the Cold War (2011).

So both from lived and critical experience I can say that Harris has captured the dawn of the ballistic age with all its intrigue, fury, and drama.

Robert Huddleston is a combat veteran of World War II and the author of two novellas: An American with the Luftwaffe (2014) and Love and War: A Father and Son in Two World Wars (2020). He and his wife Pepita reside in a continuing care facility near Chapel Hill, North Carolina where he continues to write short stories, essays, and book reviews.