Scholarly Blinders and the Diversity of Authoritarianism 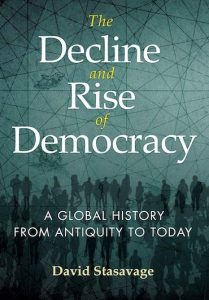 The Decline and Rise of Democracy: A Global History from Antiquity to Today
by David Stasavage.
Princeton University Press, 2020.
Hardcover, 424 pages, $35.

The authoritarian regimes of today are nothing like those of yesterday, and perhaps will look nothing like those of tomorrow. That is one of the unintended takeaways from The Decline and Rise of Democracy: A Global History from Antiquity to Today, a new work of popular social science by NYU’s David Stasavage. Surveying the width and breadth of human history and summarizing a considerable academic literature in the vein of similar macro-historical tomes by Francis Fukuyama, Walter Scheidel, Daron Acemoglu, and James Robinson, Stasavage seeks to provide a corrective to common perceptions about how undemocratic our collective past was. To that end, he attempts to recapitulate with contemporary scholarly evidence the old truth that a panoply of differing forms of political representation, deliberative decision-making, and even democracy itself existed long before the onset of the Enlightenment. In this revised telling, the most important concept at work is the presence or absence of institutionalized constraint on rule, which ultimately engendered political dynamics closer to or farther away from our own modern democracies.

In so doing, we are treated to a sweeping account of why “autocracy” (that is, totally unconstrained executive rule) was not in fact the modal form of political order in the premodern era, and how those earlier patterns of constraint—and thus more deliberative forms of governance—again rose to primacy over the last two hundred or so years in a structurally resemblant form. To Stasavage, explaining the emergence of constrained rule is a function of the ease by which a given state can solve information problems inherent in physical and human geography. That is, are they free to tax and otherwise coerce at will, or only by relying on local intermediaries, collective bodies of notables, or particularist elites? States with more advanced bureaucracies, or those endowed with dense, easily reachable populations, could thus impose autocracy, while those without such means often yielded to forms of consensual or quasi-representative institutions. Sequencing the development of a state bureaucracy to only after those constraining institutions had already been developed could sustain non-autocratic rule, but the reverse led rather to the incredibly stable autocracies of many millennia in China or the states of the medieval and early modern Islamic world. Stasavage, in a bout of unfortunate terminological optimism, calls such forms of non-autocratic rule “early democracy.”

Despite this undeniably well-written and interesting account, with an empirical sweep across continents and cultures and a parsimonious theoretical argument, we are yet left with a framing that says as much about the blinders of contemporary research on political regimes as it does about the undoubted representational virtues of many predecessor polities. Instead of providing a revisionist account of how “early democracy” was widespread and prevalent, we instead see that the contemporary stretching of democracy to capture everything under heaven that is good and valuable has long overrun its course.

Stasavage’s descriptive portrayal of premodern rule is informative, showing that again and again significant governance constraints existed in many states, primarily through variations on decentralized deliberation, consultative councils, or (socially) representative assemblies. Holding up the ancient Greek polis as an ideal-typical example of “early democracy,” in which citizens deliberated over politics with famously extensive rights in an institutionalized format, Stasavage suggests that versions of this sort of democratic rule were in fact quite common, encompassing perhaps upwards of fifty percent of the total number of premodern polities, depending on admittedly weak quantitative measurements. Such regimes, in which “a ruler governed jointly with a council or assembly composed of members of society who were themselves independent from the ruler and not subject to his or her whim,” existed not only in ancient Greece, but can also be ascribed to such far-flung locations as the Huron confederation of the North American northwest woodlands, the Tlaxcala state of pre-Columbian Mesoamerica, the Mesopotamian kingdom of Mari, and societies of precolonial central Africa. In all such places, greater or lesser elements of constraint bound the ruler in important ways.

Yet throughout these extensive empirical vignettes across time and space, we run into a problem that Stasavage attempts to address quite early—why are we stretching the word “democracy” to such a vast range of polities? The Greeks certainly did not then, quite famously. As we get into the case details, very few actually hold up as to what the popular imagination or a more stringent scholarly estimation would say makes a coherent, let alone comparable, regime type. Rather, the “early democracy” categorization here can only provide us with a rather banal finding: that some states in the past had some constraints on rulership, with an emphasis on some form of elite or sub-elite consent, and sometimes these arrangements were quite stable and long-lasting. In other words, what the classical writers termed tyranny and monarchy are not the only natural form of rule over the long stretch of the human experience.

Stasavage’s “early democracy” in this view is thus a residual category for everything that cannot be classified as autocracy, ranging from states that had tiny consultative councils of hereditary elites, to layered sets of local assemblies that were tied in one way or another to (often hereditary) central actors, to actual communal rule by large segments of society. This is simply the mirror-image of a pernicious crutch that social scientists use today when speaking of “authoritarian regimes,” which are just anything that is not a modern electoral democracy, encompassing everything from Saudi Arabia, Mali, and North Korea to Singapore, Serbia, and Hungary.

For understandable reasons, social scientists sometimes have difficulty separating the normative from the descriptive and conceptual, especially when democracy, representation, and political consent are concerned. We never wish to say anything “authoritarian” is potentially good, or stable, or cohesive, or coherent. As a result, this background premise has clouded the last three decades of scholarship on “authoritarianism” (again, that is simply anything not modern electoral democracy) and ends up obscuring the empirically rich and theoretically interesting findings in Decline and Rise no less. Mashing together hundreds of historical states with significant variations in consultative, deliberative, representational, and otherwise constrained forms of rule and giving it the august label of “early democracy” tells us very little about democracy itself—whether ancient or modern.

What Stasavage instead has done is to provide an excellent overview of the ways in which much of the historical world did not conform to simple notions of tyranny or monarchy—no surprise to a reader of Aristotle, Polybius, or Aquinas. We are therefore left with a wonderfully useful account of the institutional diversity within the “authoritarianism” of the past—and a few, truly democratic exemplars such as Athens or the Huron. Beyond that, Stasavage helps us to appreciate that there is much to gain by not making lazy assumptions about the ubiquity of tyrannic rule, unfettered autocracy, or authoritative monarchies. Fascinating points about the role of the medieval concept of plena potestas, the rise and fall of council governance, the unforeseen consequences of representative institutions without delegate mandates, and the autocratic power of modern bureaucratic, liberal democracies abound in the core middle sections of the book, which focus on Stasavage’s real interest—the conciliar and representative institutions of Europe before the nineteenth century.

To Stasavage’s credit, he knows that he has possibly overshot his framing, even briefly discussing the Aristotelian “mixed regime” and the rather wide net that his concept of “early democracy” casts temporally and spatially. Yet this modesty falls away as the book progresses toward his effort to tie together all the diverse variations on constrained forms of governance found in many premodern polities to the rise of modern electoral democracies, with their rather specific formula of an executive government chosen through electoral mechanisms with wide suffrage in which political parties can lose. At the point when the medieval France of Phillip the Fair, Frederick William’s Prussia, and even the Mongols are somehow still in the “early democracy” category, it becomes clear we have blinkered the richness of the account for the blinders of a detractingly over-simplified social science conceptualization.

The reluctance to grant that there are other regimes that do not correspond to electoral democracy, yet contain powerful and important means of political representation, wider deliberation, and social consent is a continued bugbear among scholars. Most political scientists today adhere to definitions of contemporary authoritarianism that assume the incentives and goals of classical tyranny—that the state is capricious and based on a singular ruler’s whim—and then create subtypes and subcategories to explain away all the curious institutional filigree and evident inter-elite bargaining that make such definitions so unsatisfying.

The Decline and Rise of Democracy is primarily a book about the diversity of “authoritarianism” in the premodern world in its manifold forms, and a useful reminder of the perennial persistence and importance of assemblies, councils, diets, and parliaments throughout history. Classical authors knew this reality well, as did the American Founders and the liberals and conservatives of authoritarian monarchies across Europe’s long nineteenth century. Removing the tyrannic blinders from modern scholarship would do a world of good to help us better appreciate the multitude of non-democratic forms of the past, and likely will provide greater insight into our politically uncertain future.

Julian G. Waller is a Ph.D. candidate in political science at George Washington University. His academic research focuses on political institutions in contemporary authoritarian regimes, dynamics of democratization and autocratization, and the politics of legislative bodies in historical comparative perspective. All views are his own and do not reflect those of his employer.